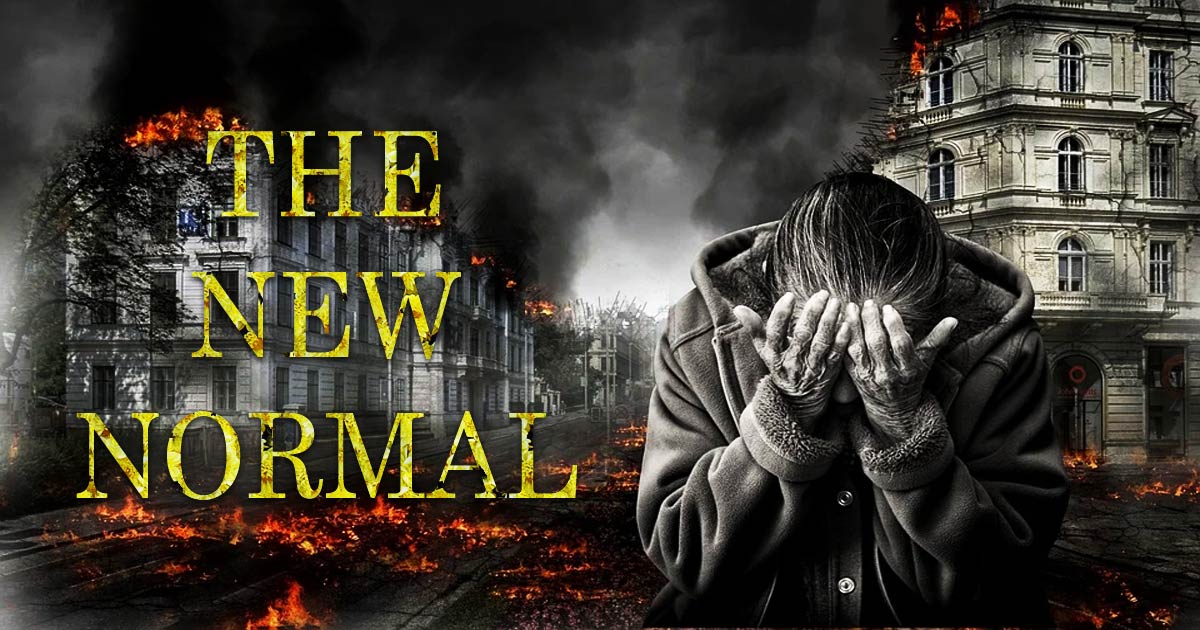 Slowly and Steadily this world is going crazy. From the point Covid has hit, the lives of many have turned upside down. Millions have lost their jobs. Vaccine adverse events that media and govt have turned a blind eye to are adding to the agony. But this is not even the worst part, people have turned against their own and blaming the unvaccinated for their miseries.

Masses have turned away from God and are still following rogue politicians who are trying their best to enslave humanity. Every nation is suffering one way or the other whether it be an internal crisis or natural calamity. It doesn’t require a rocket scientist to figure out we’re living in end times. Scriptures and prophecies are coming to reality one after the other, it’s only a matter of time when an Earth-shaking event happens and rocks the sleeping masses.

God has given us enough warnings already and now even His patience is running out. Brace yourselves if you’re not prepared, these coming events will completely knock you out of the blue and you’ll be begging for mercy from the wrong sets of people. Let’s Begin!

Rapture is the event in which almost 2% of the population will disappear in a matter of seconds. I’ve written many articles over Rapture but people still believe it to be a fairy tale. Despite many  Bible verses referring to it and so many pastors and ministries teaching it over the years. If you don’t want to believe it, it’s up to you, I’m not here to convince you of anything. Do your own research and come to your own conclusions.

Escape of the Bride(Rapture) is a fixed event and can happen as soon as the last week of September. Of course, I can be wrong but check this out straight from Devil’s workshop WWE.

There’s no way this year will pass without the bride leaving first. And once it happens the restraints will be gone and all evil will run wild. And then next comes the Alien deception.

Over the years Hollywood and various secret organizations have nurtured us to believe in extraterrestrial presence. If you have noticed, the Pentagon has been showing extra zeal in releasing UFO clips making us buy into their alien propaganda.

Take no heed there are no aliens, only demonic entities. And after the Rapture, it will be their best card to play to mesmerize people into believing there is an unknown force who wants to kill us. This will also unite the masses but all for the wrong means.

Medea( the Greek goddess of deception) will be given the reins once again to make us buy into even greater deception than Covid.

The immunization of the Internet as mentioned by Executive chairman of WEF( World Economic Forum) himself Klaus Schwab. Now as you’re unable to access basic facilities without a Covid pass, similarly you won’t be able to access the internet without a digital ID. And how would they accomplish it, by propagating a worldwide cyber-attack?

I’m expecting it to happen by the second week of November. They want to take out everything against the mainstream narrative. And in order to cleanse the internet, a cyber attack is necessary. Not only do they want to reset the internet but the global economy as well. Hence the name’ The Great Reset’.

Only those who are fully vaccinated will be eligible for Digital ID. People will be shunned off from all aspects of life. And those refusing to follow the guidelines will be led straight to concentration camps.

All your health, academic and social records will exist on a blockchain. By which govt through AI will be to personally monitor you. The final nail in the coffin of privacy. Humans will be merged physically, biologically, and digitally.

With how fast they have carried out this vaccination campaign I don’t think it will take too much time to accomplish this plan. 2020 was the pandemic. 2021 is the year of the gene therapy vaccine. And, I think 2022 will be the year of ‘The Great Reset’.

Remember when all this is going on crime is running rampant. People are losing their livelihoods and food stores are running dry along with hyperinflation. As more and more countries go bankrupt political leaders will lose all confidence. Which is the plan from the start.

By the end of 2022 people will have no jobs, no food to feed their families plus there will be diseases never seen before due to the ill effects of Covid Vaccines. But wait, here comes the next event, World War Three. But before it begins ‘Antichrist’ will already be revealed to people. In what way or form that is up for speculation.

World war three was already prophesied by Albert Pike in the letter he wrote to Guiseppe Mazzini in 1872. It will start from Israel and spread to the entire world like a wildfire until each nation will be depleted of its economic resources. Why do I think it will happen by the end of 2022? Those proficient with history should know after the Spanish Flu, came a great depression in 1929 which was followed by World War Two. And history always repeats itself.

Tensions are already brimming. With the recent upheaval in Afghanistan and U.N accepting the authority of the New Talibani government. The largest terror state has been created and the U.S president calls it an overwhelming victory. China is ready to invade Taiwan. Israel and the U.S want a piece of Iran. There are too many to mention in this short article. The fact of the matter is the way of Palestine will be the way of the world because we have been living in ignorance for way too long.

A World war is also necessary for people to lose all confidence in their political leaders. So a new system could replace it. People have been dumbed down to believe that their governments will take care of them in case of crisis. People have forgotten their creator and must be taught a lesson. Some of them will take heed and realize this is all prophecy unfolding. For the rest, they will play straight into the hands of the devil.

World war three will be stopped by the Antichrist who would be later worshipped as a god. Masses who have lost everything, their homes, loved ones will search diligently for the last ray of light which they will find in the false Christ. This false messiah will weed out all governments and set up a new kingdom. Ten new kings will be anointed who will take control of the global populace.

Once he establishes himself in the hearts of the masses and people acknowledge his authority, the mark of the beast can finally be unleashed.

Mark of the Beast

Covid vaccines have already corrupted the human genome but you are still welcome if you accept Jesus Christ as Lord and savior. Mark of the beast will corrupt your spirit and there is no going back from it. This mark will come with various merits that the people won’t be able to refuse. No more vaccines, economic benefits for a lifetime, etc., etc. Under the pretense of peace and safety, your fate will be sealed. Your name will forever be erased from the god’s book of life.

16 And he causeth all, both small and great, rich and poor, free and bond, to receive a mark in their right hand, or in their foreheads:

But the most important thing is you have to go through none of these events. Understand this is a spiritual battle and pay attention to prophecies getting fulfilled before it’s too late. Pick up your Bible and follow ministries that are teaching the true gospel.

People are too consumed to look things up for themselves don’t be one of them. If you’re left behind after the Rapture you will face death and that’ll not be a pleasing experience. Believe in Christ’s sacrifice and the blood he shed for your sins. Ask him for forgiveness and repentance and start a new life.

UK Gov 2019 Report: Airports must close within 10 years, beef & lamb to be banned, and construction of new buildings must cease in the name of “Climate Change”

Global Blackout in Europe: It’s not IF but rather WHEN says Austrian Defense Minister