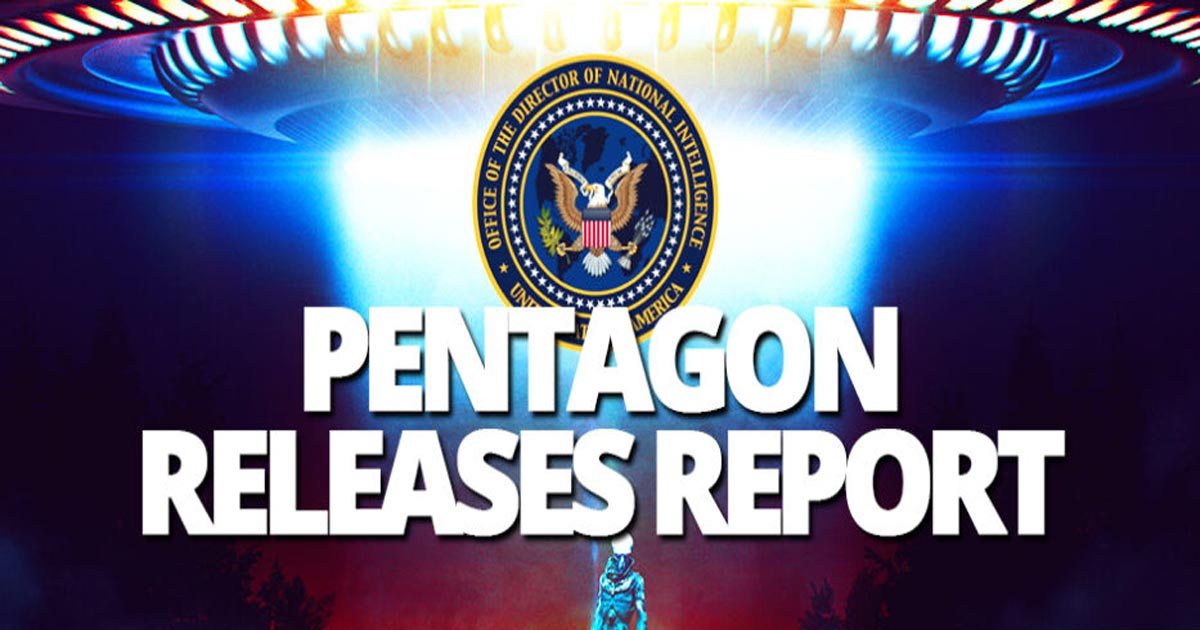 Is this the prelude to Rapture? Pentagon reports ‘We currently lack data to indicate any Unidentified Aerial Phenomenon is part of a foreign collection program or indicative of a major technological advancement by a potential adversary’ says a long-awaited report on UFOs.

Just moments ago, the long-awaited report by the Pentagon on 144 instances of UFOs, or as they say Unidentified Aerial Phenomenon, concludes that 143 of the cases looked at defied any sort of earthly explanation. They could not be connected to any military or technology program to any government of any nation on the face of the Earth. In short, the Pentagon has just admitted that UFOs existing outside of human technology do in fact exist.

This was their perfect moment to step up to the plate, and once and for all state that UFOs do not exist and that there is a reasonable and logical explanation for the dozens and dozens of sighting by USAF and Navy jet pilots. But they could not do that because there is no earthly explanation for what you see in those videos. In typical governmental fashion, they dodged the question at hand, refusing to answer it while at the same time refusing to put the issue to rest. This is a total win for our side, stay tuned, today’s report is only the beginning.

CLICK TO ENTER THE NTEB ARCHIVE ON UNIDENTIFIED FLYING OBJECTS

FROM THE US OFFICE OF NATIONAL INTELLIGENCE: The limited amount of high-quality reporting on unidentified aerial phenomena (UAP) hampers our ability to draw firm conclusions about the nature or intent of UAP. The Unidentified Aerial Phenomena Task Force (UAPTF) considered a range of information on UAP described in U.S. military and IC (Intelligence Community) reporting, but because the reporting lacked sufficient specificity, ultimately recognized that a unique, tailored reporting process was required to provide sufficient data for analysis of UAP events.

In a limited number of incidents, UAP reportedly appeared to exhibit unusual flight characteristics. These observations could be the result of sensor errors, spoofing, or observer misperception and require additional rigorous analysis.

There are probably multiple types of UAP requiring different explanations based on the range of appearances and behaviors described in the available reporting. Our analysis of the data supports the construct that if and when individual UAP incidents are resolved they will fall into one of five potential explanatory categories: airborne clutter, natural atmospheric phenomena, USG or U.S. industry developmental programs, foreign adversary systems, and a catchall “other” bin.

UAP clearly poses a safety of flight issue and may pose a challenge to U.S. national security. Safety concerns primarily center on aviators contending with an increasingly cluttered air domain. UAP would also represent a national security challenge if they are foreign adversary collection platforms or provide evidence a potential adversary has developed either a breakthrough or disruptive technology.

Consistent consolidation of reports from across the federal government, standardized reporting, increased collection and analysis, and a streamlined process for screening all such reports against a broad range of relevant USG data will allow for a more sophisticated analysis of UAP that is likely to deepen our understanding. Some of these steps are resource-intensive and would require additional investment. CLICK TO READ THE FULL PDF REPORT