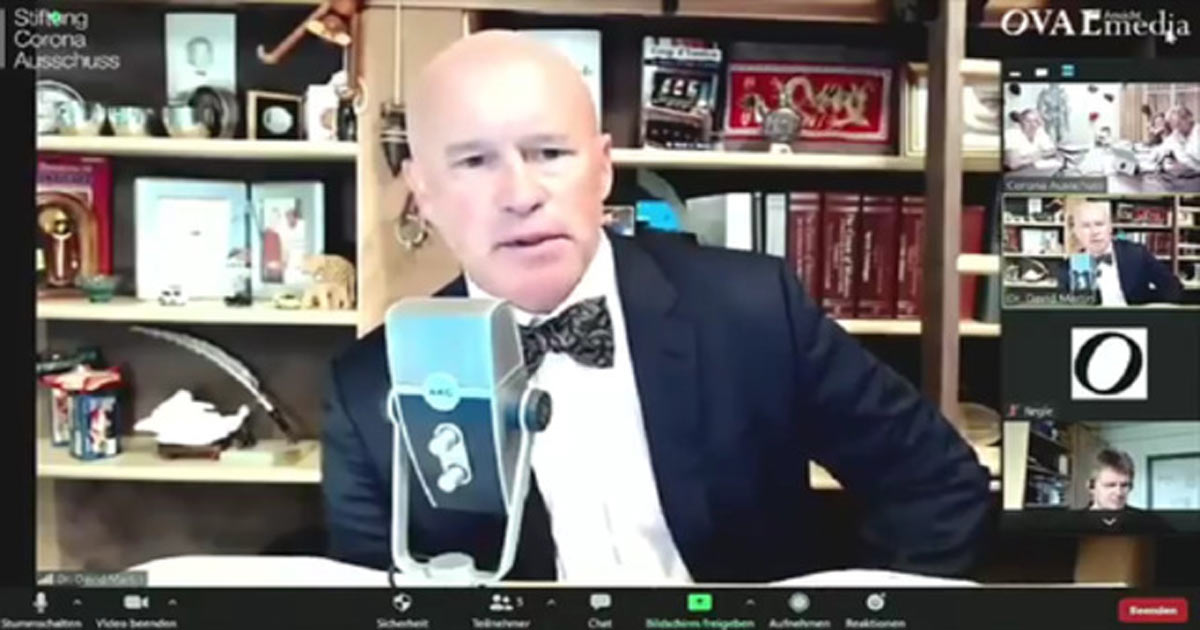 There appears to be nothing novel about the Coronavirus as Dr. Martin explains in this July 9 interview with lawyer Dr. Reiner Fuelmich. There are 73 patents covering every aspect of the virus going back 21 years. Some were filed as early as 2000. The CDC even paid extra money (from US taxpayers) to ensure some patents were not visible to public scrutiny, Some people are making enormous amounts of money from this criminal enterprise and it is a delusion to believe the virus escaped from a Chinese laboratory and spread all over the world.

The script for this pandemic was written in 2004 at a conference called ‘Sars and Bioterrorism’, held on January 6th by Merck where the phrase ‘The New Normal’ was first coined and adopted by the WHO for the propaganda campaign, along with the idea of a universal vaccine.

Moderna knew they were slated to have a significant part to play in the development of the vaccine in March 2019 as they suddenly amended a series of failed patent filings; a very bizarre behavior to specifically mention a ‘deliberate release’ of Coronavirus. They amended 4 patents to begin the vaccine development. Moderna didn’t own all the technology which was a problem, so they negotiated with the 2 companies that owned this technology – Arbutus and Accuatus Pharmaceuticals who owned the lipid nanoparticle envelope process which delivers the mRNA fragment.

In November 2019, Moderna entered a research agreement with the University of North Carolina, Chapel Hill to develop spike proteins to put inside the lipid nanoparticle for the vaccine. This was before the virus allegedly even “emerged” and therefore meant that a candidate vaccine had ALREADY existed for it. What makes this even worse is that Dr. Fauci in every board meeting of the NIAID between 2016 and 2019 lamented the fact that there wasn’t a way to make EVERYONE take a universal flu vaccine. But there was an ‘epiphany with these amended patents in March 2019 in that:

What if there was ‘an accidental or intentional release of a respiratory pathogen?’

What is problematic here is that the same phrase is used in a book called ‘A World At Risk’ written by the World Health Organization in September 2019, months before the virus emerged. It says we need a ‘coordinated global experience of a respiratory pathogen release ‘ which by September 2020 must have in place a universal capacity for public relations management, crowd control, and the acceptance of a universal vaccine.

Ken, this is nearly an hour into the video and the material is deep and precise – which is great for anyone who wants to search for the truth of what is happening. I think it completely exposes the pandemic as a criminal scam and those with legal and evidence-based brains would find this information invaluable.

There are lots more as the video lasts for 1 hour 51 minutes and includes some German as Dr. Fuellmich translates some of what Dr. Martin is saying into German, presumably to be used as expert testimony in his legal challenge to the German Government. I hope he succeeds.

Dr. Zelenko on why enemy’s strategy to keep us in fear works like a charm(video)