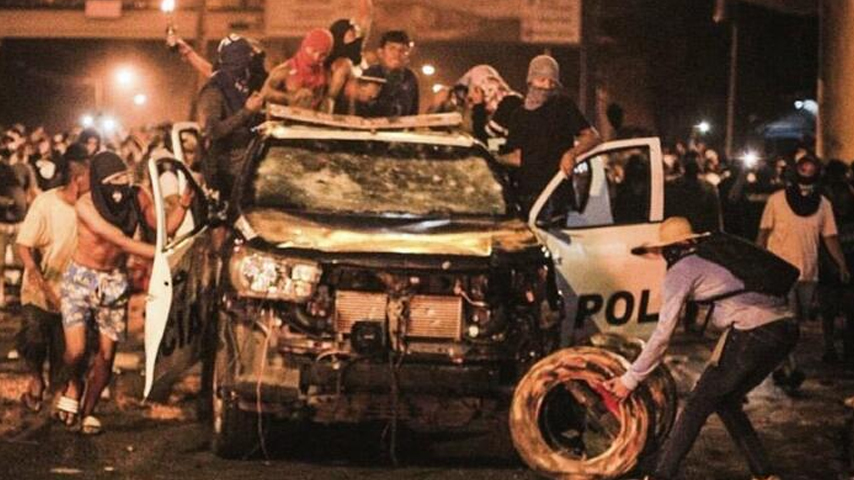 It started as a teacher’s strike to protest the high cost of gas, but it’s now the largest civil unrest in Panama since the end of dictator Manuel Noriega’s reign in 1989.

With fiery roadblocks disrupting commerce and causing shortages of food, fuel and other supplies, the Panamanian government has entered a new round of talks meant to placate the masses and avoid further economic damage, which some assess at $500 million and counting.

Panama is heating up (literally). They are protesting corruption and high prices. pic.twitter.com/oZWdge4muv

President Laurentino Cortizo had already made two major moves to quell the unrest, only for it to continue.

On June 11, he widened subsidies to extend a freeze on gas prices to all consumers, capping the price at $3.95 a gallon, which was 24% lower than the end-of-June price. He also promised to pursue price caps on 10 basic goods, including pasta, beef loin, vegetable oil and canned sardines.

With protestors demanding economy-wide price cuts and increased spending on education and health care, the demonstrations continued, not only in the form of marches and strikes but also roadblocks of major highways, including the internationally-critical Pan-American Highway. The Panama Canal has thus far escaped disruption; strikes by canal workers are illegal.

Last weekend, Cortizo announced a deal by which the government would reduce the price of gas again — this time, to $3.25. That price cut was offered in exchange for an assurance that the roadblocks would be cleared while discussions of price relief on medicines and other essentials continued.

However, on Monday, leaders of the National Alliance for the Rights of the Peoples (Anadepo), a protestor coalition representing labor unions, civic organizations and indigenous people, announced they were breaking their commitment, saying they had made the deal under pressure. Some groups said they weren’t represented in the negotiations.

The Cortizo administration agreed to return to the negotiating table yesterday, with more talks mediated by the Catholic archbishop of Panama. Toribio García, a leader of a semi-autonomous region, said any gas price over $3.00 was “not negotiable.”

Protesters in Panama take control of the Pan-American highway at Santiago de Veraguas, expressing rejection of the government's repression against the people, two weeks into mobilizations over the economic crisis. pic.twitter.com/Rr7RiZrX98

Price inflation isn’t the only driver of the protests. As the Spanish international news agency EFE reports:

The protesters also have focused much of their ire on graft, shouting slogans demanding an end to the “theft” of public money; for his part, acclaimed Panamanian singer-songwriter and activist Ruben Blades wrote in a communique that the problem is pervasive within a state apparatus that has “institutionalized corruption.”

In remarks to Efe, Jose Eugenio Stoute, a member of the organization Poder Ciudadano, echoed those sentiments, saying that entire families of lawmakers are benefiting from bloated public contracts and receiving exorbitant salaries.

At the same time he announced the first gas price reduction, President Cortizo said public institutions would begin cutting payrolls by 10%, while instituting budget reductions and restrictions on foreign travel by government employees.

That may not be enough to prevent the upheaval from turning into an all-out revolution against a government seen as living well on the backs of common people. Earlier, members of the ruling Democratic Revolutionary Party threw fuel on the fire when photos captured them drinking $340 bottles of Macallan whisky while celebrating the start of a new legislative session.

"The protests … began at the end of June. They were partly fuelled by a video circulated on social media in early July that showed ruling party lawmakers celebrating the beginning of the legislative period with $340 bottles of Macallan whisky." FT #HuelgaPanama2022 pic.twitter.com/IbcaJGYoJK

This week, Panama City mayor José Luis Fábrega is under fire after he was photographed shopping in a pricey store in an exclusive part of Madrid, while unrest gripped his city. Earlier in the week, a journalist said he contacted the mayor’s office asking to confirm he was leaving the country. The staff told him, “It was the brother. It looks a lot like him.” Now, the mayor’s office says Fábrega is indeed in Spain — to see a doctor.

With a currency pegged to the U.S. dollar and steady revenue from its vital canal, Panama has been a stable country for decades. Now, however, Panama is a canary in a coal mine, showing that much broader global unrest may soon be upon us.

Protests happening in Ecuador over increased gas and food prices. Not that anyone would know about it since our media is pretending like the whole world isn’t rising up against the global elite. pic.twitter.com/8jhWeSvpkE

After Sri Lanka and Panama, a riot broke out in the African nation of #Malawi to protest fuel price hikes pic.twitter.com/Q3nmpQssg0