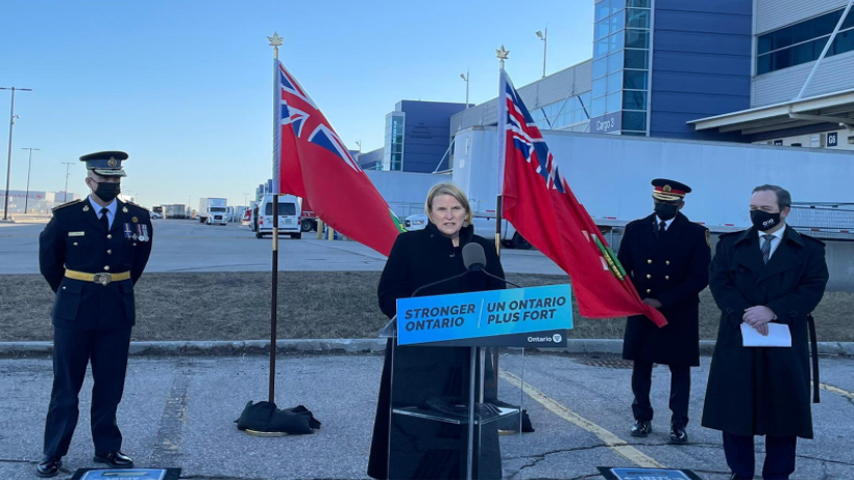 The Government of Ontario has explained: “The Keeping Ontario Open for Business Act, 2022 includes legislative measures to enable police officers to better protect international border crossings, which are important to Ontario’s economy and international trade.”

It adds: “The intent of this act is to protect critical transportation infrastructures such as international bridges and airports from unlawful disruptions that, as demonstrated by recent events in Windsor, hurt people and businesses.”

The “recent events” refer to a week-long, anti-vaccine and anti-lockdown protest in February that shut down the Ambassador Bridge between Windsor, Ontario and Detroit, Michigan.

They write: “It’s one of the oldest plays in the book. A crisis is followed by new laws that are intentionally broad enough to be applied to just about anybody who’s considered inconvenient.”

Teklu, Zwibel and Hahn further note: “We’re worried this legislation will mostly end up criminalizing workers, Indigenous, Black and other racialized people who criticize the government, bad bosses, and the rich and powerful.”

And they conclude: “There are no guarantees [that the expanded police powers granted under this Act] won’t be used against those of us calling attention to injustice, to racism and colonialism, and to economic exploitation.”

A similar piece of legislation passed in Alberta protects essential infrastructure from damage or interference caused by a protest. It came into effect in June of 2020 and was almost immediately challenged by the largest union in Western Canada.

CTV News has reported: “A similar piece of legislation [Bill 1, the Critical Infrastructure Defence Act] passed in Alberta that protects essential infrastructure from damage or interference caused by a protest. It came into effect in June of 2020.”

That article adds: “The legislation was introduced following a series of nation-wide protests that blocked railway lines in support of the Wet’suwet’en hereditary chiefs’ opposition to the Coastal GasLink Pipeline Project in British Columbia.”

The Alberta Union of Provincial Employees (AUPE) challenged Bill 1 in court. That claim was dismissed in December 2021. The AUPE is now seeking a decision from the Supreme Court of Canada.

CTV also notes: “In Manitoba, the government is looking at legislation that would tighten security at the legislature and ban certain activities from the grounds. Security officers would have the power to evict people or fine them up to $5,000 for not complying.”

That article further explains: “The legislation was proposed after two encampments—one that took place after the discovery of unmarked graves at former residential schools and the other against COVID-19 restrictions—were disbanded.”

The text of that legislation can be read here.

In contrast to these bills in Ontario, Alberta and Manitoba, Global Witness has highlighted that governments should: “guarantee that defenders’ human rights are protected”, “legally legitimize the role of land and environmental defenders” and “safeguard the rights of defenders and protesters to free assembly and speech, as well as potential recourse to civil disobedience.”