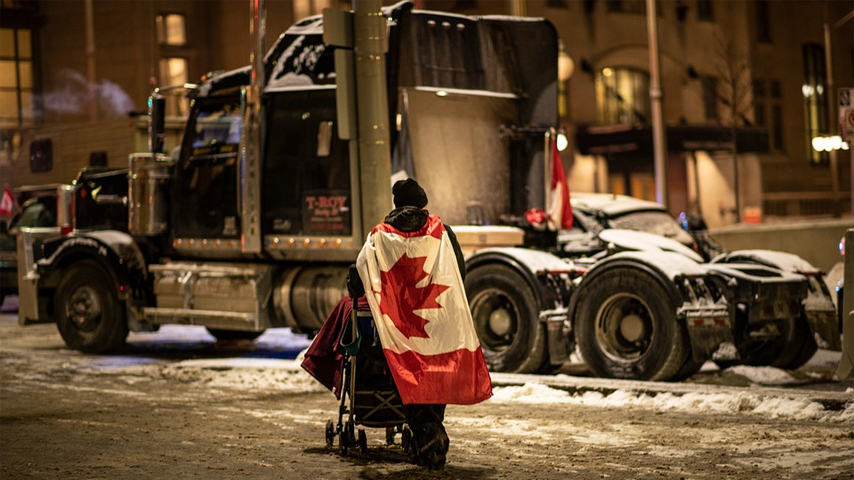 Anybody who decides to go against the govt will be PUBLICLY SHAMED!

Locations of the Freedom Convoy donors in Ontario, Canada, have been published on Google Maps after the names of those who gave money to the crowdfunding platform GiveSendGo were leaked online.

The Google Maps link contains thousands of pins pointing to locations of donors throughout the Canadian province, with each pin listing their names, donor ID, email address, and the amount they donated, including those as low as $10.

I’m not going to post the actual url out of respect for those people but trust me, it’s real and a lot of data.#abpoli #canpoli pic.twitter.com/wCcus5o1gG

Who published the donors and how the list was obtained from GiveSendGo still remains unknown. Last week, the Christian crowdfunding platform GiveSendGo had its data reportedly hacked to reveal the names of donors supporting the truckers protesting the vaccine mandate. Once the names were publicly leaked, the Canadian Broadcasting Corporation (CBC) reportedly began to harass people on this list. Shortly thereafter, Breitbart News received the following email that an Ottawa-based Canadian received from CBC Ottawa’s David Fraser and Guy Quenneville titled, “CBC Ottawa interview request: donating to Freedom Convoy protest in Ottawa”:

This is David Fraser and Guy Quenneville from CBC Ottawa.

We’re working on a story about the people who allegedly contributed funds, through GiveSendGo, to the ongoing Freedom Convoy protest in Ottawa, according to the public release of hacked data from the site.

We’re reaching out to you because your name and information appeared on the list, and we’re interested in interviewing you both about why you may have donated to the cause, but also how you feel about having had your personal information leaked.

We should stress: we are not automatically identifying anyone by name in our story. We need to verify with people that they indeed contributed, as a first step.

The second step is seeing if people will share their story with us.

If you’re interested, please write us back as soon as possible.

Many other Canadians reported receiving similar emails as various Canadian journalists began to publicly share the list, with the Washington Post writing a “lengthy thread singling out the biggest donor and a map showing where the donations came from in the U.S,” according to Fox News.

Email provided to me by a source pic.twitter.com/qbzebYyHiP

If this was not enough:

Photos surfaced online showing threatening posters that were hung up all over the streets of Ottawa, calling for people to “thank” their “local convoy donators” – presumably in the most aggressive fashion possible.

The poster was titled “Know Thy Neighbor,” and included a list of donors’ names, email addresses, and the amount given.

There were even some Twitter users who reported that the fliers also showed up on the front doors of some of the listed donors’ houses, which is absolutely horrifying – the people who would do this are completely unhinged.

The apocalypse is near! Food production collapse! Soaring wheat prices from the U.S. to Russia are raising bread costs