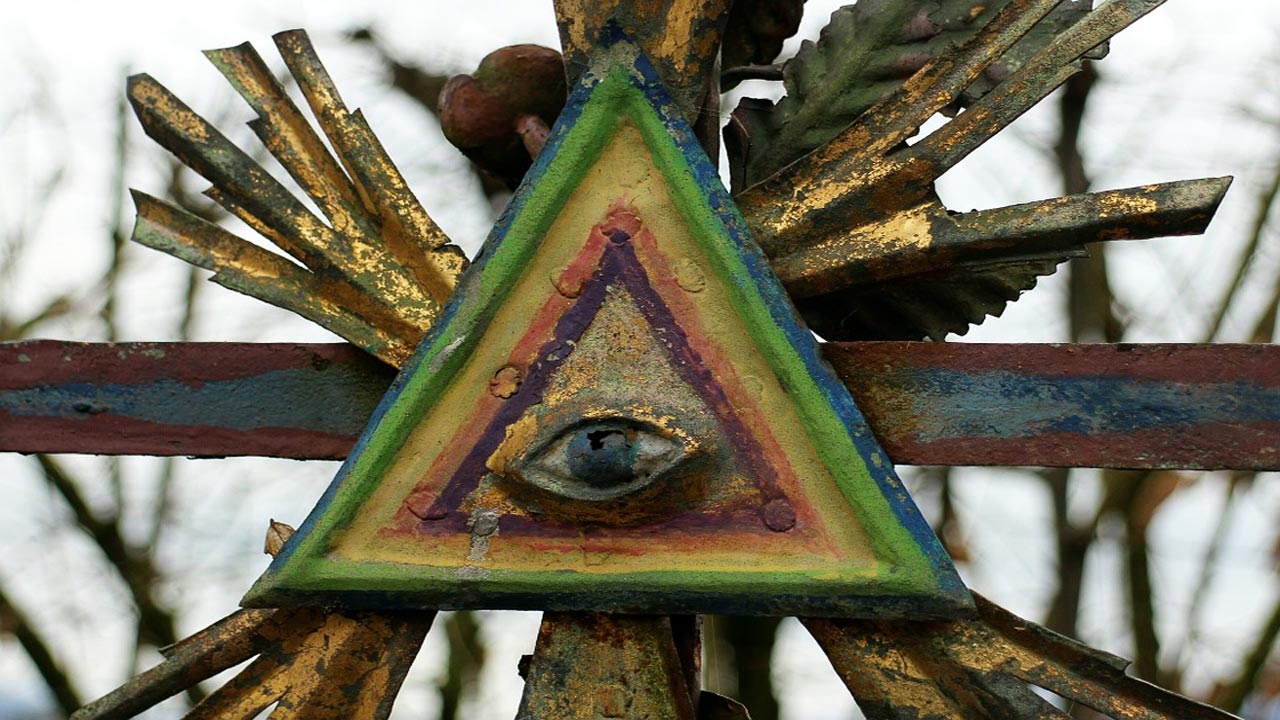 Omicron comes from the Phoenician letter ayin, meaning eye. The symbol representing Delta is a triangle.  Yes, it appears the Luciferian Elite is displaying their COVID-19 calling card.

A delta is a triangle. For example, the Nile Delta gets its name from its triangular shape.  For Freemason’s the triangle symbolizes the Greek capital A, also referred to as the “Shining Delta.” The base of the triangle represents duration, and the two sides are depicted as equal qualities of male and female, light and darkness.

Within the mystery religion of Freemasonry, the delta or triangle is the symbol of the Supreme Architect, who is Lucifer, The Light Bearer. Both the square and the compass form a triangle. a symbol of stability and the spirit world. Thus the delta is hidden from our material world. Just as the supposed Delta Variant is an offshoot of the covid-19 virus which cannot be seen.

The inverted triangle or delta is the symbol of the first degree of witchcraft. The second deeper degree of witchcraft is represented by the upright triangle. Witches and wizards traditionally write their names, followed by the number of delta’s conferred their level in the craft.

The anagram for Omicron Delta is Media Control. Is anyone surprised? The esoteric mystery religion is Satanism and one of their methods of secretive communication is the anagram. Luciferians believe a word retains the same meaning, regardless of the letter arrangement. For example, the anagram for Santa is Satan.  Lucifer was cast out of heaven which is located in the North. Santa resides at the North Pole. Nicknamed “Old Nick” derived from Saint Nicholas, often associated with fertility cults. Medieval belief indicates the Devil was most feared to enter the home via the chimney.

Almost sixty years ago the Italian sci-fi movie “Omicron” made its debut. The plot revolves around an alien from Venus who possesses and resurrects the corpse of a blue-collar worker.  The creature known as Omicron inhabits the body in order to study the world, report his findings to Venus. Then return with his minions to destroy civilization.  The producer for the movie is “Lux” a Latin word translated as light.  A likely reference to the name “Lucifer” which means “light-bringer”.  During the opening scene of Omicron, the doctors examining the corpse find an acupuncture mark where the alien could have penetrated the body.  Quite an odd reference considering the current Omicron variant is likely an effect from the jab.

The origins of the esoteric mystery religion go back thousands of years. The first pagan trinity established on earth was Nimrod God of the Sun, Semiramis Goddess of the moon, and Tammuz son of the stars.  Semiramis was declared the Holy Mother and Queen of Heaven. Tammuz the Divine Son, was the reincarnated child of Nimrod.  And keeping with the holidays,  Semiramis gave birth to Tammuz on December 25th.

Christmas is a Roman Catholic holiday disguised as a Christian celebration of Jesus Christ’s birth. In the third century, Constantine decreed Christianity as the state religion of the Roman Empire. In order to placate the Babylonian pagans the birth of Christ was moved to December 25th so each religion could celebrate their “Son/Sun” God.

Contained within the three worlds – divine, humane and elemental is the number three, as in a three-sided delta. And why it is represented in so many religions, each having its own trinity:  Satan, Antichrist, False Prophet/ Father, Son, Holy Spirit/ Brahman, Visnu, Shiva/ Nimrod, Semiramis, Tammuz/ Osiris Isis and  Horus.

Freemasonry unites all these gods in their oaths by identifying them with the delta. The three-sided triangle represents the entire man – body, soul and spirit. The Masons’ great work is perfecting the masterpiece, represented by the cubic rock and crowned by the pyramid-shaped stone.

The Great Pyramid of Giza contains the burial tomb of Osiris, Egyptian God of the underworld of death, life and resurrection. He was the brother and husband of Isis. Firstborn after the creation of the world. Osiris was murdered by his younger brother Set and reincarnated by Isis, his widow/sister. After Set drowned Osiris, Isis recovered his body, only to have it stolen by Set, who then chopped it into fourteen pieces. Isis found and reassembled the thirteen body parts of  Osiris… everyone except his phallus. By the invocation of black magic, Isis became pregnant,  eventually giving birth to her son Horus, who was her reincarnated former husband and brother Osiris.

The pure white capstone symbolizes the Light Bearer.  White is the color of light, completion, resurrection and the alchemical combination of the seven color spectrum – red, orange, yellow, green, blue, indigo and violet. These are illuminated as the seven levels of the Chakra system. White, black and red represents the colors of Freemasons. Red and black are the preferred colors of Satanists. Red equates to blood sacrifices. Black equals death.

The Washington Monument and St. Peter’s Square symbolically commemorate Osiris’ missing phallus. The US Capital and Vatican Dome honor Isis’ womb. Encased in a triangular capstone on the dollar bill, the Eye of Horus is the resurrected Osiris/Apollo/ Nimrod/Anti-Christ.

Black Cubes are an imitation of the holy or holies located in Solomon’s former temple. They are strategically placed in Manhattan, Santa Ana, Australia and Denmark. Islam’s centerpiece of veneration, the Kabba, is also in the shape of a black cube. All have six surfaces and a mysterious seventh point, the most important symbol in  Freemasonry. These six surfaces are the directions and elements. North-South-East-West, up-down-front-back, right-left-above-below, earth-fire-air-water-spirit and matter. Spiritually, in the middle of the black cube stands the new Adam, trans-human and radiating six pyramids.  Superman or Trans-human Adam 2.0 is the embodiment of perfection. Upgraded from a mortal double-helix DNA genome into an immortal triple-helix DNA genome. Grafted into Lucifer’s image.

Freemasonry’s mission is control of Jerusalem, ushering in the Anti-Christ’s fourth kingdom of iron and clay, and the establishment of paganism as the final religion.

Daniel Chapter 2, Verse 43 says, “As you saw the iron mixed with soft clay, so they will mix  with one another in marriage, but they will not hold together, just as iron and clay do not mix.”

A fresco of Mason George Washington’s ascension into divinity is stamped on the US Capital Dome, a homage to the sea firmament dome. The Taj Mahal, St. Basil’s Cathedral, and the Dome of The Rock are other examples of dome shines. Freemasons believe their work will continue after apotheosis. The detached capstone setting above the pyramid on the dollar represents this unfinished work.

When the Freemasonic symbols of the square and compass are placed over the pyramid, it spells Mason. The thirteen stars on the Great Seal form the six-pointed hexagonal star. This is a symbol of  Saturn, Black Cube, and Satan. Saturn is the sixth luminary from the white Sun. Male images 37 represent the sun. Females embody the moon.

In 1776, Adam Weishaupt founded the Bavarian Illuminati, which propagated the abolition of all governments and religions, setting the template for Anti-Christ’s seven-year rule. An  inscription above the illuminated eye of Horus states Annuit Coeptis, which means ‘He favors us.’ The ribbon under the pyramid states, Novus Ordo Seclorum or ‘New Order for the Ages.’ Pluribus  Unum means ‘Out Of Many, One.’

The Giza pyramid is a tribute to the Tower of Babel and Nimrod, who was the first Nephilim Sun king who rebelled against God. Luciferian’s believe he rises from the abyss, resurrected as the Anti-Christ.  After his ascension, the capstone eye will be set on the pyramid of the New transhuman temple, transcending from mortal to immortal. Reflecting the image of Lucifer.

The Protocols of Zion – Preface, Introduction, Who are the Elders?