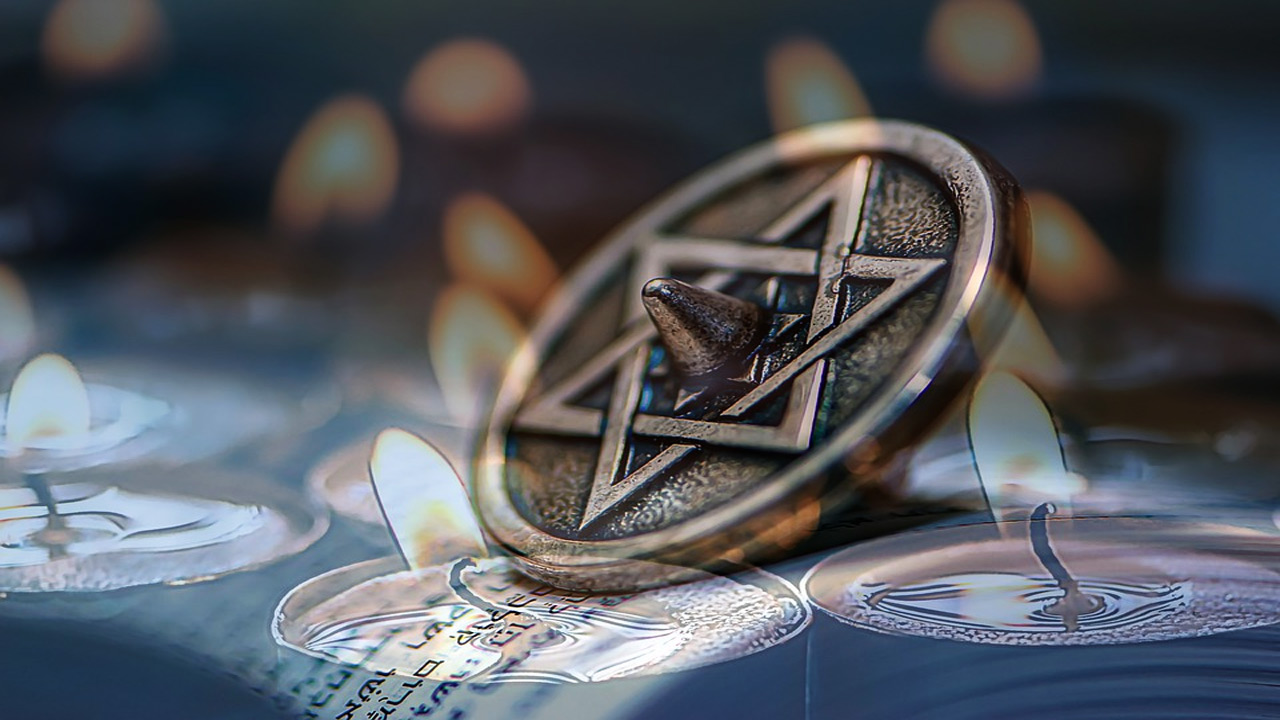 The molecular structure of graphene is in the shape of the Star of David hexagon, a symbol of Israel, also known as the Seal of Solomon, the signet ring associated with King Solomon, mysticism and Jewish/Islamic occultism.

As Confucius once famously stated, ” Signs and symbols rule the world, not words nor laws.”

Believed to be the primary compound contained within the covid injection, graphene oxide nanoparticles have sharp edges capable of cutting blood vessels on a microscopic level, and is the lightest material on earth, measuring one atom. The strongest compound ever discovered, the best conductor of heat and electricity at room temperature. Graphene contains a capacity for ultra-wide bandwidth, giving it the ability to connect humans to an electromagnetic grid, and the Internet Of Things.

The hexagon is not only contained within Star of David/Seal of Solomon but also atop Saturn, known as Black Star, the planet of Satan, manifesting simultaneously as a six-pointed star and hexagon, the shape of graphene. In the occult, the symbol of two converging triangles is steeped in Bonpo, the Black Magic sect of Buddhism.  Saturn, the purple planet, represents Kali, the Hindu Goddess of death and time. Red and Blue are the alchemical primary colors of Freemasonry. Purple is the color of the royalty, worn by Jesus the day of his crucifixion.

The equilateral triangles in the Star of David/Seal of Solomon represent the duality present in all oriental religions. Similar to the Ying and Yang, the Seal of Solomon hexagon unites all things good and bad into one. During the reign of Solomon, Kabbalists purposed it as a conduit of occultic magic and the invocation of spirits.

During World War Two, the Nazis conscripted the Hebrews to wear the Seal of Solomon hexagon as a symbolic curse, mocking the chosen people of God. For Kabbalists, the Seal of Solomon is the number of The Beast. Six triangles, six points, six lines. Six, Six, Six. In spite of its spiritual connection to death, Israel adopted it as their national symbol.

Kabbalah is the Satanic mystery religion of the post-modern world. Rooted in Freemasonry, Kabbalah’s foundational doctrine is the apotheosis or resurrection of man, reflecting the image of Lucifer. Through the practice of Black Magic and the esoteric teachings of occult mysticism. Kabbalah reveals the God of the Bible as the Demiurge, the lesser God and creator of the material universe. However, inferior to Lucifer Morning Star, The Light Bearer.

Within the mystery religion, symbols illustrate the duality of chaos and restoration simultaneously. Points symbolize chaos. Stripes represent the coming Fifth Age of Aquarius.  Kabbalists espouse God as incomprehensible. Therefore, they are the Gods. Deifying themselves eliminates all connections to the Ancient of Days.

The Book of Daniel prophesied five separate ages, representing gold, silver, bronze, iron/clay and stone. We are living in the fourth age of iron/clay and Luciferian’s believe they will soon access the philosopher’s stone and its legendary alchemical substance Black Goo. Mixing the iron of technology, with the clay of an image, creates an eternal Trans-human. Could graphene be the compound to initialize the process of turning man into a hybrid of iron and clay?

Everything dominion Lucifer establishes in the first and second heaven is a mimicry of God’s creation. As above, so below illustrates the lie of duality and confusion. Freemasons and Knights of The Templar believe the Demiurge and Lucifer are both Gods, as demonstrated in the black and white trestle floor of  Masonic Halls and Ying and Yang of Chinese philosophy.

The systemic lie of Kabbalah postulates that God is the total of everything: good and evil,  knowable, unknowable, limitless, limited, merciful and cruel. In the beginning, Kabbalists believe God sent out an emanation of himself in the form of ten lights called the Sephiroth or Tree of  Secret Knowledge. This equates to the name I Am. The universe is comprised of layered spheres of frequencies, with the Ancient of Days ruling from the ninth dimension/heaven.

To be one with the Light Bearer, disciples must pass through the nine guarded spheres, which are protected by angels and devils. Only those who know the guardian’s passwords can pass through the nine spheres. Gnostic knowledge enlightens the soul as it ascends the ladder of the Sephiroth, attaining apotheosis. The ten Sephiroth spheres are the driving forces that move all of creation.

According to The Book of The Secrets of Enoch, there are ten heavens in the multiverse.

Kabbalists divide the universe into four worlds, each consisting of ten spheres, set and arranged into the Sephirothic Tree or Tree of Secret Knowledge. The secret philosophy is hidden within the systemic structure of the Sephirothic Tree, revealing the mysteries of the Old and New  Testaments.

The Book of Enoch, Chapter 24, Verses 9-11 says, “And that tree of an agreeable smell, not one of carnal odor, there shall be no power to touch, until the period of the great judgment, when all shall be punished and consumed forever. this shall be bestowed on the righteous and humble.  The fruit of this tree shall be given to the elect. For towards the north life shall be planted in the holy place, towards the habitation of the everlasting King. And I blessed the Lord of glory, the  everlasting King, because He has prepared this tree for the saints, formed it, and declared that He  would give it to them.”

With arms and legs extended, man is the embodiment of the Superman/Trans-human of the  Sephirothic Tree. Comprised of ten globes, the Tree of Secret Knowledge has three vertical columns connected by twenty-two channels. This represents the perfected Adam. In his original  Trans-human body, Adam displayed his spirit on the outside of his body. Spiritually, The Sephirothic Tree symbolizes Adam reflecting the light of Lucifer.

Three steps inside the front door of every Freemasonic lodge are two pillars representing duality. Each column is adorned with pomegranates and a sphere. One pillar is topped with a round earth and the other with a blueprint of the universe. The right column, Jachin, is the mysterious pillar of mercy. The left column, Boaz, is the pillar of severity. These Hebraic columns are the entry point to the place of mystical transformation, as represented by the Egyptian God  Amon-Ra. The third middle column represents Equilibrium, defined as wisdom, strength and beauty.

The Masonic Lodge is eminently different from the Hebrew temple of Solomon. Between the pillars of Jachin and Boaz is an altar showcasing the Compass, Square and Bible. These are known as the Great Lights of Freemasonry.  Adjacent to these lights is the three candelabras or three lesser lights. Together they form a triangle, symbolic of the Sun, Moon and Master Hiram Abiff, the first immortal master Mason and original designer of Solomon’s temple.

The floor surrounding the altar is covered with white and black tiles, arranged like a  chessboard., symbolizing the duality of life. A flaming star sits prominently above the alter. The triangle contains the square, compass and the letter G in the middle. The Masonic Temple’s ceiling is adorned in blue, signs of the zodiac, and a chain of rope, illustrating the unity of Masons across the earth. From the main room, a door leads into a blackened meditation room. Displaying drawings of skeletons, skulls, salt, black bread, writing paper, a glass of water, and a black table. In the final inner room is a skeleton inside a coffin.

The Masonic Lodge was constructed as a tribute to Osiris.  The Egyptian Trinity of Osiris, Isis and Horus form the spiritual foundation of both The Great  Pyramid of Khufu and the Freemasonic Temple. 28 Truth is found in numbers. In the Hebraic dialect, Jehovah is written by connecting twenty-four dots. Twenty-four elders are constantly before the throne of the Demiurge. The power of evil is the sign of Jehovah inverted. And the true word of a Mason is found in the name of the deity. Truth in secret. Even the Druids knew there was a spiritual power in numbers, as December twenty-fifth is celebrated as the birth of the Sun God Ra.

Nineteenth-century French occultist and ceremonial magician Eliphas Levi postulated that man could discover all that is knowable and hidden concerning the Ancient of Days by comprehending the dynamic between the ten globes of the Sephiroth Tree and the twenty-two letters of the Hebraic language. The twenty-two channels are an illustration of the most important trump card in the Tarot deck of cards. Ten globes and twenty-two letters equal the occultic number thirty-two. Luciferian’s believe there are thirty-two paths of wisdom. This is the secret system of arranging the mysteries of creation that are hidden in the thirty-second degree of Freemasonry. Thirty-two teeth in the mouth, nerves connecting the brain. And thirty-two spinal segments to the skull. Thirty-two is the number of times the name I Am occurs in the book of Genesis. Follow the numbers. Formerly known as the brotherhood of death, Skull and Bones 3:22 derive their numbers from the Book of Genesis.

Genesis 3:22 says, “Then the Lord God said, ‘Behold, the man has become like one of us, to know good and evil. And now, lest he put out his hand and take also of the tree of life, and eat,  and live forever.’”

The Creepy Christian Cabal that Controls the World