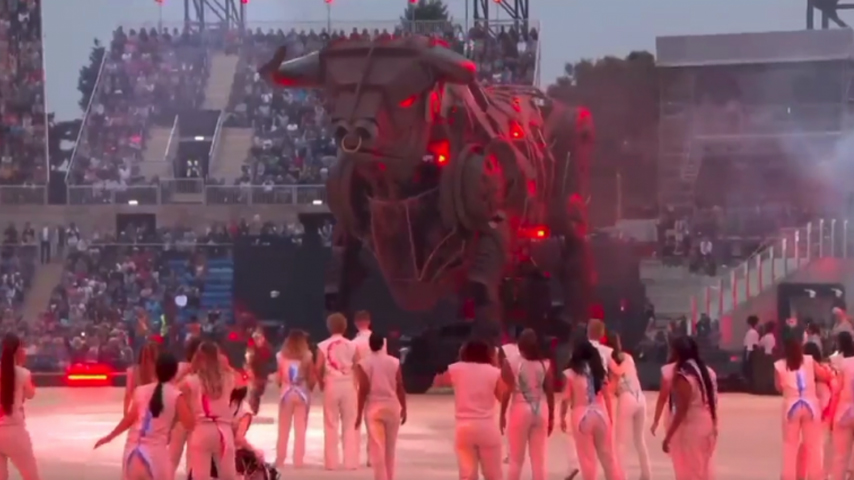 They aren’t even trying to hide it anymore.  During the opening ceremony of the Commonwealth Games in Birmingham, England on July 28th, a giant mechanical bull with glowing red eyes was rolled out into the center of Alexander Stadium.  The bull was approximately 10 meters high, and it took more than five months to build.  It had been given the nickname “Raging Bull”, and it absolutely dwarfed all of the human participants that were involved in the performance.  The “hero” of the opening ceremony, a character known as Stella, calmed the creature down and then all of the human performers gathered around the giant bull and literally began to bow down and worship it.  I have seen a lot of really weird things in recent years, but I have never seen anything quite like this.

A total of 72 nations participate in the Commonwealth Games, and so this opening ceremony was being viewed on countless television screens all over the planet.

The symbolism in this “ritual” was well planned in advance, and the organizers knew exactly what they were doing.

But they were also counting on the fact that the vast majority of the general population would not consciously catch on to what was actually taking place.

The bull has always been a symbol of an ancient deity from the Middle East known as “Baal”.  The following comes from Christianity.com…

In artistic depictions and archeological finds, Baal took the shape of a bull or ram and had associations with fertility.

This god also, apparently according to Canaanite lore, defeated El and had associations with the sun and thunder. And of all the foreign gods the Israelites came into contact with, they appeared to struggle the most with worshipping this one.

If we could go back thousands of years and roll out a giant bull with glowing red eyes for the people of the ancient Middle East, they would instantly understand what was going on.

Nobody would need to tell them that it was a statue of Baal and that they were intended to worship it.

An article that was posted on WorldHistory.org details the period of time in which the symbol of the bull first started to become associated with Baal…

Baal Hadad originated in Mesopotamia under the names Adad in the north and Iskur in the south. He is attested as early as the time of the Akkadian Empire (2334-2218 BCE) but became more popular after the fall of the Third Dynasty of Ur (2047-1750 BCE) during the First Babylonian Empire (c. 1894 to c. 1595 BCE). Even so, at this time, he was not a major deity and was often associated with the storm god Ninurta as a subordinate or with the great god Enlil as a kind of personal secretary. It was during this time, however, that he came to be associated with the bull as his sacred animal, which would become a prominent aspect of his iconography later.

In addition to sexual rituals, Moloch worship included child sacrifice, or “passing children through the fire.” It is believed that idols of Moloch were giant metal statues of a man with a bull’s head. Each image had a hole in the abdomen and possibly outstretched forearms that made a kind of ramp to the hole. A fire was lit in or around the statue. Babies were placed in the statue’s arms or in the hole. When a couple sacrificed their firstborn, they believed that Moloch would ensure financial prosperity for the family and future children.

With all of that in mind, I would like for you to watch this video of the moment when the giant mechanical bull was rolled out into the center of Alexander Stadium…

It was being reported that music from Black Sabbath was being played as the colossal beast was being brought out.


Why do they have to perform some sort of incredibly bizarre ritual in which they bow down to the beast?

We are obviously meant to understand that the performers are worshipping the bull.

If people from the ancient Middle East were to watch this spectacle, they would immediately identify it as Baal worship.

After the bull is calmed down, at one point three women are lifted up to ride on top of the bull.

When I saw this, I instantly thought of a passage from Revelation chapter 17…

3 Then he carried me away in the Spirit into the wilderness. I saw a woman sitting on a scarlet beast which was full of blasphemous names, having seven heads and ten horns. 4 The woman was arrayed in purple and scarlet, and adorned with gold and precious stones and pearls, having in her hand a golden cup full of abominations and the filth of her sexual immorality. 5 On her forehead a name was written:

MYSTERY,
BABYLON THE GREAT,
THE MOTHER OF PROSTITUTES
AND OF THE ABOMINATIONS OF THE EARTH.

When I saw her, I marveled greatly.

One of the announcers on television suggested that this giant bull will have a permanent place in Birmingham once the games are over.

I haven’t seen any confirmation of this, but it would be extremely alarming if it is true.

The elite love to use opening ceremonies, awards shows and other public spectacles to mentally and emotionally condition us.

And when they pull stunts like this, they know that only a very small fraction of the general population will ever object.

We live in very strange times, and I believe that they are only going to get weirder.

Unfortunately, the vast majority of the population is still dead asleep.

They have no idea what the elite are doing, even though it is happening right in front of their eyes.