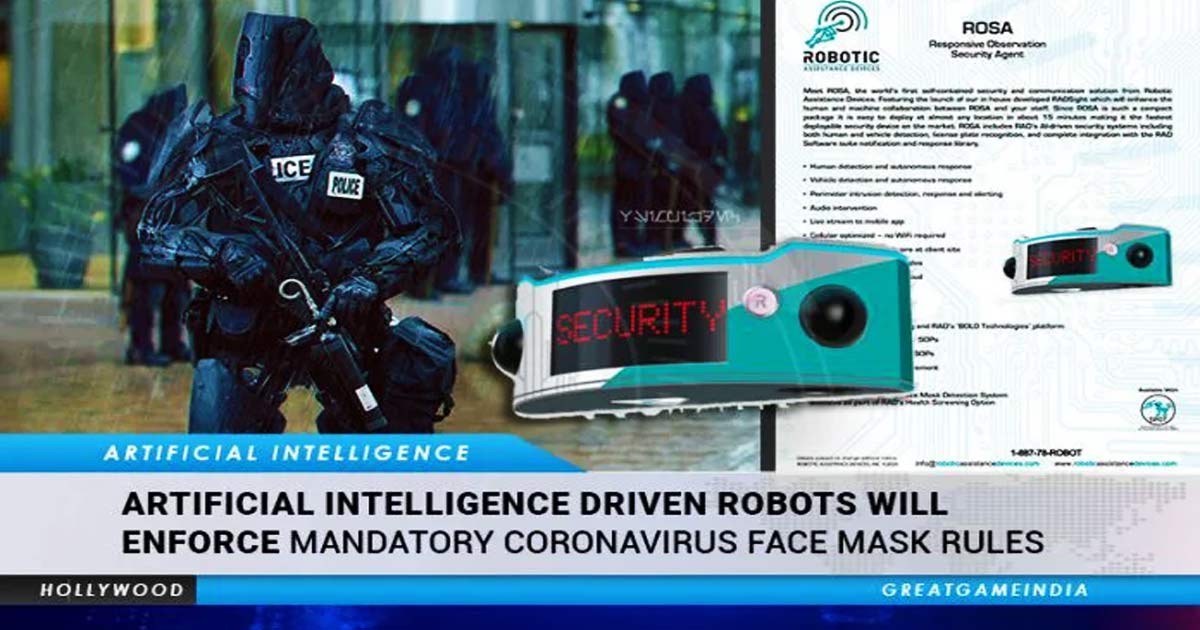 Now AI driven face-detection robots will enforce mandatory face mask rules. The AI robot can also keep a record of violators and repeat offenders of those who fail to wear masks. What will be the consequences for mask offenders has not been revealed yet.

As RAD puts it, ROSA is an “AI-driven security system including both human and vehicle detection, license plate recognition, and complete integration with the RAD Software suite notification and response library.”

Credited with the “ultimate autonomous response device,” ROSA utilizes powerful AI software and sensors in “a 180° field of view”. This is to ensure that masks are worn by everyone, and to enforce mask-wearing.

“This is a game-changer for us,” said Corey English, COO of GSG Protective Services, the RAD dealer who sold both ROSA devices.

“Face mask enforcement in this environment is challenging, and the RAD lineup allows reinforcement of critical regulations that are in place for everyone’s safety – without bias and without confrontation,” English said.

Record of violators and repeat offenders

Steve Reinharz, Founder and CEO of RAD, said ROSA keeps a record of violators and repeat offenders of those who fail to wear masks.

“The ability to record violators, and particularly repeat violators, gives high profile end-users such as this one options for enforcement and general security,” said Reinharz. “It’s great to see the first order specifically for this technology come within a very short period of time from when we announced it.”

If ROSA becomes popular in Hollywood, a much wider and grand release of this wall robot is expected, since slowly mask requirements are being made mandatory globally. Though this monitoring work is ongoing, the press release however didn’t state any particular consequences for mask offenders at the studio.

Digital Identity based on your Vaccination history

#TrustStamp funded by #BillGates & implemented by Mastercard & GAVI will soon link your biometric digital identity to your vaccination records for predictive policing. Those who dont wish to be vaccinated maybe locked out of system based on trust score.https://t.co/Gnzz870DfS

The program said to “evolve as you evolve” is part of the Global War on Cash and has the potential dual use for the purposes of surveillance and “predictive policing” based on your vaccination history. Those who may not wish to be vaccinated may be locked out of the system based on their trust score.