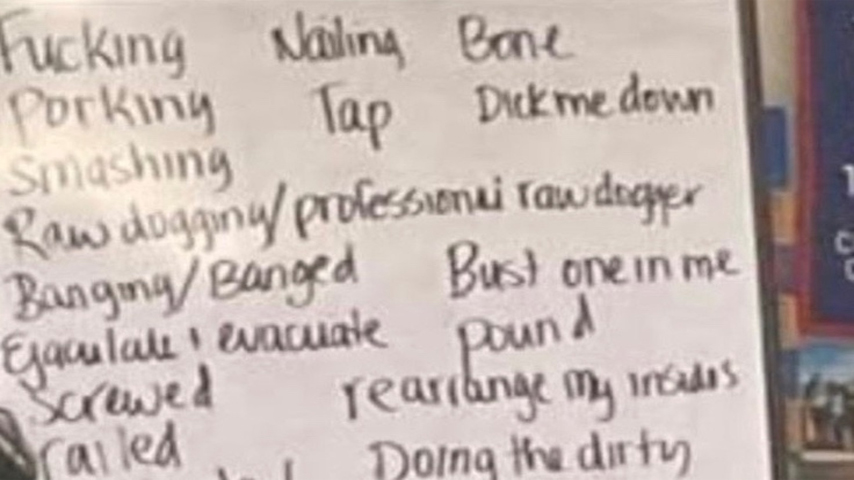 A New York school district is standing by a sex-ed lesson that instructed students to discuss terms such as “face fuck,” “coochie slayer,” and “professional raw dogger.”

The Croton-Harmon school district says its teachers should discuss these sexual terms, which were part of a lesson plan this month for a district high school’s 10th-grade health class so that students can learn “the importance of using respectful language” about sex. A photo of these phrases on a classroom whiteboard, which also included “ejaculate and evacuate,” “bust one in me,” and “rearrange my insides,” circulated on social media, sparking outrage from parents. The school district, however, is refusing to back down.

Look what's being taught in 10th grade at a Westchester HS & in schools around NY, according to many concerned parents who contacted me. Inappropriate, vulgar & criminal sexual content needs to be banned from classroom. Stick to core academic subjects. #revengeofthenormalpeople pic.twitter.com/XBmYvBhQ69

“Learning experiences such as this one are important for our students, and we trust our highly trained, dedicated, and passionate professionals in their facilitation of these experiences,” the district said in a statement last week.

Some of the phrases appear to be obscure slang for graphic descriptions of sex: One of the terms—”charzarding”—is defined only in Urban Dictionary.

The Croton-Harmon school district did not respond to a request for comment.

The incident marks the latest in a series of controversies over how sex education is taught to schoolchildren around the country. Liberal advocacy groups funded by Democratic Party donors, including the Sexuality Information and the Education Council of the United States, have pushed school districts nationwide to teach elementary school students about gender identity and transgenderism, the Washington Free Beacon reported last year.

The Westchester County school district’s sex education plan sparked heated debates at a June school board meeting. One parent whose daughter was in the classroom said, “I frankly do not see the connection between using this level of vulgarity in the classroom and teaching the concepts that the administration says are the goals.”

Some state Democrats, meanwhile, have come to the school district’s defense. Peter Harckham, a New York state senator present at the meeting, defended the school and thanked its teachers for their “sensitive conversations and professionalism.”

The health curriculum for district high schoolers includes a Planned Parenthood-produced video about consent that only portrays same-sex couples. The Trans Student Educational Resources’ popular “Gender Unicorn” graphic, which claims that “gender identity” and sexual attraction are on a spectrum, is also listed in the curriculum. The middle school curriculum, meanwhile, includes several lessons about transgenderism and an activity in which students create an exhibit on LGBT issues for the Museum of Natural History.

The New York district’s push for sexualized health lessons comes as the Biden administration advocates in favor of sex transitions for children through hormones and surgery. The White House in June released a plan to counter Republican states that attempt to ban transgender hormone treatment for minors, which has already been met with lawsuits from LGBT groups and the American Civil Liberties Union.

Rob Astorino, a New York Republican gubernatorial candidate who shared the photo of the vulgar terms, said he is concerned parents are unaware of the growing instances of overly sexualized lesson plans.

“Kids who can’t get into a rated-R movie are now learning about twisted and dangerous sex acts,” Astorino told the Free Beacon. “If someone was caught teaching kids this stuff in a park, he or she would be arrested as a sex offender.”