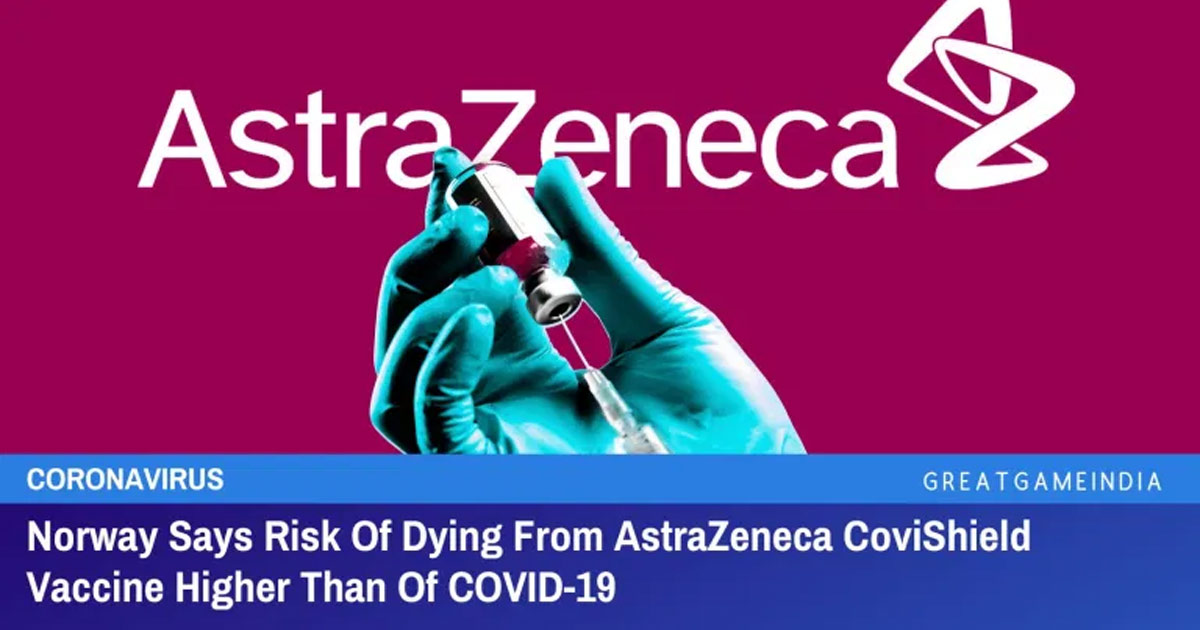 Norway has announced that you are at a greater risk of dying from the AstraZeneca vaccine branded as Covishield in India than from COVID-19. While waiting for the final decision on the controversial vaccine, Norway has meanwhile decided to offload its stock of AstraZeneca to fellow Nordic countries that actually want to use them despite the associated risks.

Norwegians run a greater risk of dying from being inoculated with AstraZeneca’s vaccine than from COVID-19, the National Institute of Public Health (FHI) concluded in its analysis, recommending the vaccine, previously linked to serious complications in the form of rare blood clotting and hemorrhage amid low platelet counts.

Abstaining from the vaccine could possibly prevent up to 10 deaths related to side effects, the FHI said, according to the newspaper Verdens Gang.

So far, Norway has seen five cases of serious incidents reported shortly after vaccination, with three fatalities. FHI has calculated the mortality rate from the AstraZeneca vaccine as 2.3 people per 100,000 vaccinated.

The FHI stressed that continuing to inoculate will by contrast expose younger women to an “unreasonably high risk”, given the current relatively levels of infection in Norway.

Furthermore, the institute is against offering the vaccine on a voluntary basis, which has been proposed both in Norway and fellow Scandinavian nations.

“We believe that such an alternative may appear unethical and with a high risk that those who make such a choice have not fully understood the risk to which they are exposed,” the institute said.

The FHI also ventured that recommending the AstraZeneca vaccine for further use could lead to lower confidence among the population in vaccination programmes in general.

A recent survey by the FHI in collaboration with Mindshare and Norstat indicated that 76 percent of the respondents were sceptical of at least one of the vaccines, even though 82 per cent were initially positive about getting vaccinated. Of the vaccines, AstraZeneca gained the highest level of scepticism at 99 percent, compared with Moderna (9 per cent) and Pfizer (8 per cent).

Pending a final decision, however, Norway has decided to distribute its stock of AstraZeneca to fellow Nordic countries that actually want to use them.

Moreover, this comes at a time when numerous European countries have stopped or suspended the use of AstraZeneca’s vaccine for causing blood clots and are launching lawsuits against the company.

German scientists have found out how the broken parts of Johnson & Johnson and AstraZeneca COVID-19 vaccines branded as Covishield in India mutate to trigger blood clots in recipients.

Scientists say the vaccine is sent into the cell nucleus instead of surrounding fluid, where parts of it break off and create mutated versions of themselves. The mutated versions then enter the body and trigger the blood clots.

Earlier, German scientists found the exact 2 step process of how the COVID-19 vaccine causes blood clots in recipients. They describe a series of events that has to happen in the body before the vaccines create these large clots.

Meanwhile, the European Medicines Agency’s (EMA) safety committee has added another blood condition to the potential side effects of AstraZeneca’s vaccine branded as Covishield in India – the Capillary Leak Syndrome.

Capillary leak syndrome is a condition that causes fluid to leak out of blood vessels and could cause very low blood pressure, leading to pain, nausea, and tiredness or, in the worst case, kidney failure and strokes.

CDC report admits 74.2 million people in the USA have not had a single dose of a Covid Vaccine, & another 157 million have refused a 2nd or 3rd dose