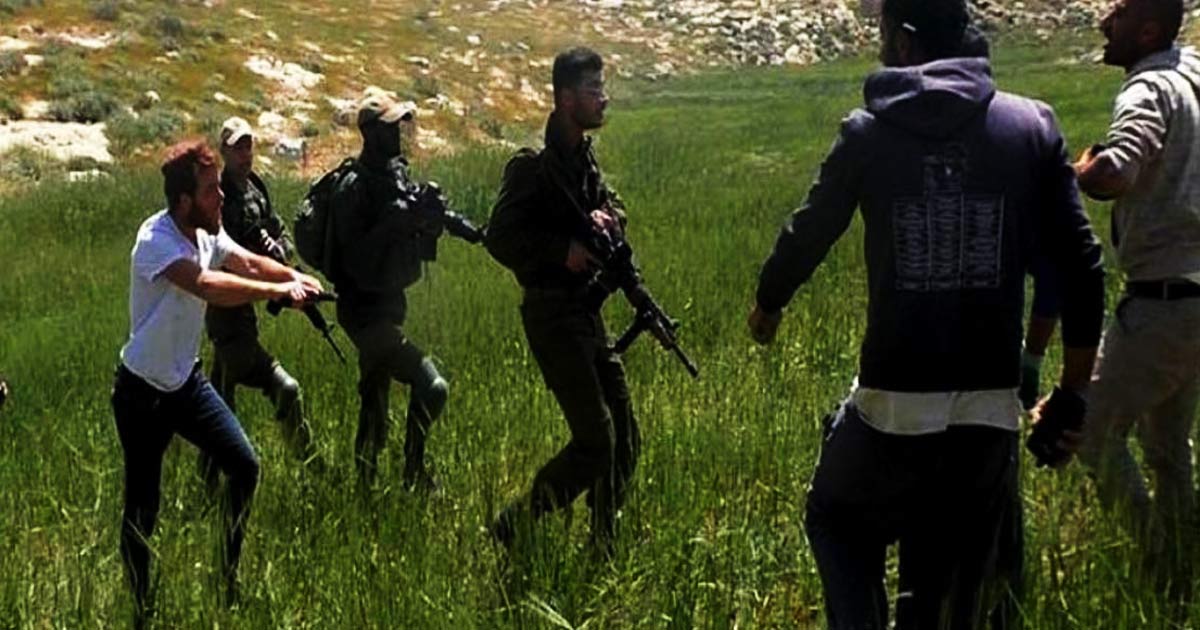 Israeli rights group B’Tselem has revealed exploitation of Israeli settlers of coronavirus to increase their violence against Palestinians, noting this violence is protected by Israeli occupation forces.

“Since the start of the corona crisis, Israeli settlers have ramped up attacks against Palestinians throughout the West Bank, with full state backing,” a report posted on B’Tselem’s website announced.

“The attacks have increased despite the movement restrictions, lockdowns and social distancing measures introduced to battle the pandemic,” the report added.

According to the report, B’Tselem documented 23 settler attacks against Palestinians during the first three weeks of this month – 22 April, compared to: “23 incidents were documented in March, 11 of them after the severe restrictions on movement and social gatherings were imposed mid-March. In comparison, 11 attacks were recorded in January and 12 in February.”

The Israeli NGO stated that some of the Israeli settlers carry firearms, and physically assault Palestinians with the aid of clubs, axes, electroshock weapons, stones and assault dogs, in some cases causing severe injury.

The NGO added: “Settlers also harass Palestinian shepherds almost daily in the Jordan Valley, near the settlements of Rimonim and Kochav Hashahar, and in the South Hebron Hills.”

It also noted that the Israeli settlers: “Graze their cattle and sheep in Palestinians’ cultivated fields, mostly in the Jordan Valley, on a daily basis,” adding that these routine acts of harassment and vandalism are not included in the report.

Regarding the physical assaults on the Palestinians, the NGO stated, as an example, a: “Serious incident took place on 16 April, when brothers Issa and Musa Qatash from Al-Jalazun Refugee Camp were attacked by settlers while out for a walk in their family plots near the village of Jibya. The brothers were beaten so severely that they required medical attention.”

“The assault on Issa Qatash was prolonged and resulted in a fractured bone in his leg and two broken front teeth. The settlers also spat at Qatash, which forced him to enter isolation in a Palestinian Authority facility for fear of corona infection, keeping him away from his family for several days after the traumatic event. He was released on 22 April and is now self-isolating at home.”

B’Tselem confirmed that: “These actions are part of a joint strategy by the settlers and Israeli authorities to systematically block Palestinian access to land – one acre, field, fertile plot, grove or pasture at a time – for decades on end, and take effective control of it.”

The Israeli NGO stated that: “This way the state [of Israel] transfers the means of livelihood of Palestinians into the hands of Israelis. Settler violence is the state’s unofficial, privatised arm that serves to gradually achieve this goal.”

According to B’Tselem, Israel’s: “Full support for this violence is evident in the actions of Israeli security forces on the ground,” pointing out that “five of eight attacks on Palestinian homes in March occurred in the presence of soldiers, who not only allowed the settlers to do as they pleased but took action against Palestinians trying to protect their families and homes.”

Giving examples, the rights group mentioned an: “Incidents occurred in April, with soldiers firing rubber-coated metal bullets and tear gas canisters at residents, as has happened in the villages of Qusrah and Ash-Shuyukh on 6 April.”

Concluding its report, B’Tselem elucidated: “For years, Israel has allowed settlers to attack Palestinians and damage their property virtually unimpeded, as a matter of policy. This includes provision of military protection for the attackers, and in some cases soldiers’ active participation in the assault. The police, meanwhile, hold back from enforcing the law on the offenders.”

B’Tselem stressed that: “This is part of Israel’s strategy to encourage the dispossession of Palestinians from growing areas throughout the West Bank, which paves the state’s way to take over more land and resources.”

It stressed that: “The fact that this violence has exacerbated during a global pandemic adds another layer of brutality to Israel’s policy.”

Rapture Watch: False Prophet Pope Francis arrives in Iraq to claim ABRAHAM as the Foundation of One World Religion CHRISLAM