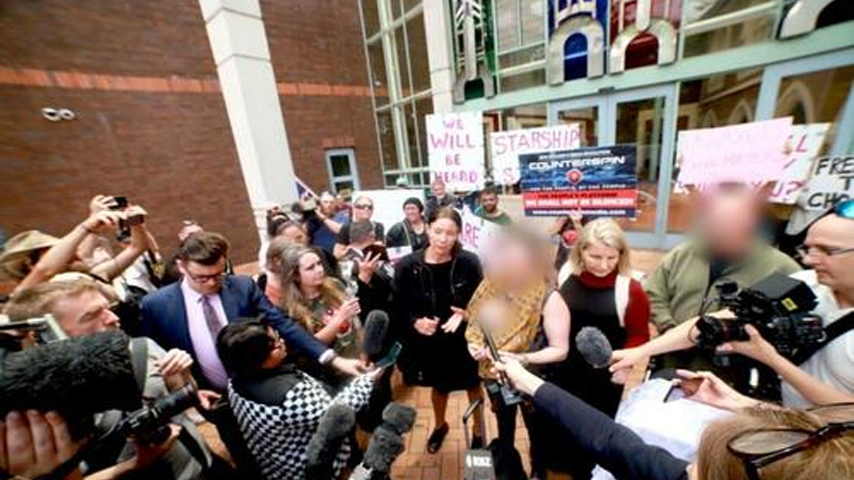 Te Whatu Ora is taking a case against parents who are refusing to allow blood from vaccinated people to be used during their baby’s life-saving heart operation. Photo: RNZ / Mohammad Alafeshat

Over 100 anti-vaccination protests showed up in New Zealand to support the parents of a critically ill 4-month-old baby in New Zealand who demanded that the hospital provide supplementary blood from unvaccinated donors before the child goes under the knife for pulmonary valve stenosis, a heart valve disorder.

The boy’s mother says she wants “safe blood” to be used, which her lawyer described as a fear of blood containing traces of vaccines using mRNA technology.

The request has been denied by the New Zealand health service, which says vaccines pose no risk to donor supplies, according to RNZ. On Tuesday, the Auckland High Court will decide whether to grant a request to remove the child from the family to perform the surgery.

Paul White, a lawyer for Te Whatu Ora, aka Health New Zealand, described the baby as “getting sicker with every heartbeat.”

Te Whatu Ora is making an application under the Care of Children Act regarding the baby who needs open heart surgery.

It is asking that the baby be placed under the guardianship of the court.

According to White, a child with this condition would have been treated by now.

Sue Grey, a lawyer for the family, said the doctors are dismissing the parents as conspiracy theorists and ignoring their concerns.

A full hearing on the matter will be held on Tuesday.

One supporter of the family, Sarah McNaulty, said she was standing up for freedom of choice.

“There’s so many people lined up to give their blood freely,” she said, adding “That is where tyranny starts. When the state provides us with not being able to give blood freely to a patient that needs it.”

According to officials, the Blood Service does not segregate blood from vaccinated and unvaccinated donors, and there is no risk from the Covid-19 vaccine.