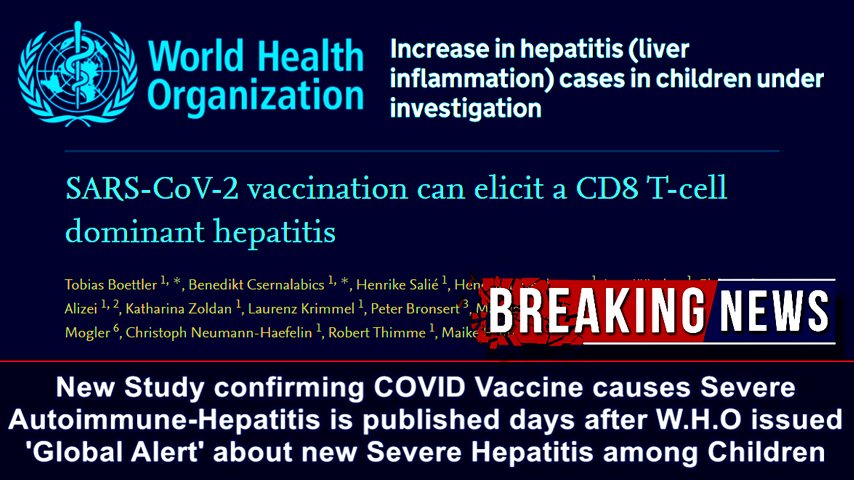 The findings come just days after the World Health Organization issued a ‘global alert’ about a new form of severe hepatitis affecting children; and after the UK Government announced it was launching an urgent investigation after detecting higher than usual rates of liver inflammation (hepatitis) among children, after having ruled out the common viruses that cause the condition.

On April 15, 2022, the World Health Organization issued a global alert about a new form of severe acute Hepatitis with an unknown aetiology (cause) affecting previously healthy children in the UK over the last month. Cases have also been notified in Spain and Ireland. Tests have excluded all previously known Hepatitis viruses.

As of 25th April, the hepatitis infections had been confirmed to have hit children in twelve different countries, with the majority of those cases spiking in the UK. At least 169 cases had been reported by this date, and 17 children had required a liver transplant. Sadly, as of 25th April, 1 child had unfortunately lost their life.

Hepatitis is a condition that affects the liver and may occur for a number of reasons, including several viral infections common in children. However, in the cases under investigation, the common viruses that cause hepatitis have not been detected.

A previous study conducted on behalf of Pfizer in the latter half of 2020, found that the contents of the Covid-19 injections and the spike protein that they instruct a person’s cells to produce, do not remain at the injection site, and instead circulate to all parts of the body for a minimum of 48 hours. However, the time that they circulate/accumulate could be much longer, but the scientists who conducted the study only took observations for 48 hours.

Now, a new study, published on 21st April 2022, has concluded that Covid-19 vaccination can elicit a CD8 T-cell dominant hepatitis.

The abstract of the new study reads as follows –

“Autoimmune hepatitis episodes have been described following SARS-CoV-2 infection and vaccination but their pathophysiology remains unclear. Here, we report the case of a 52-year-old male, presenting with bimodal episodes of acute hepatitis, each occurring 2-3 weeks after BNT162b2 mRNA vaccination and sought to identify the underlying immune correlates.”

The scientists conducted the study via the following method –

The results were as follows –

Leading the scientists to conclude –

In Layman’s terms, what the scientists discovered is that liver inflammation (hepatitis) can occur in some individuals after vaccination and shares some typical features with autoimmune liver disease.

This is caused by highly activated T cells (also called T lymphocyte, a type of leukocyte [white blood cell] that is an essential part of the immune system) accumulating in the different areas of the liver.

Within these liver infiltrating T-cells is an enrichment of T-cells that are reactive to SARS-CoV-2, suggesting Covid-19 vaccine-induced cells are contributing to liver inflammation.

The NHS began rolling out the Pfizer Covid-19 injection to five million 5 to 11-year-old children in the UK at the beginning of April 2022. It had previously been administered to young children deemed vulnerable since the end of 2021.

Is it just a coincidence that a mere few weeks later an extremely concerning number of children are suffering hepatitis of unknown cause? A form of hepatitis so severe that children are requiring liver transplants, and losing their lives.

Too much time and money have gone into insisting the Covid-19 injections are extremely safe and effective for the authorities to now admit that they were wrong. And they also have far too much money tied up in Big Pharma to risk losing it all by doing so.

But with studies concluding the Pfizer Covid-19 injections can cause severe hepatitis, surely this is one of the first places the World Health Organization and UKHSA should be looking in order to prevent any more children sadly losing their lives.

The White House is now your doctor!