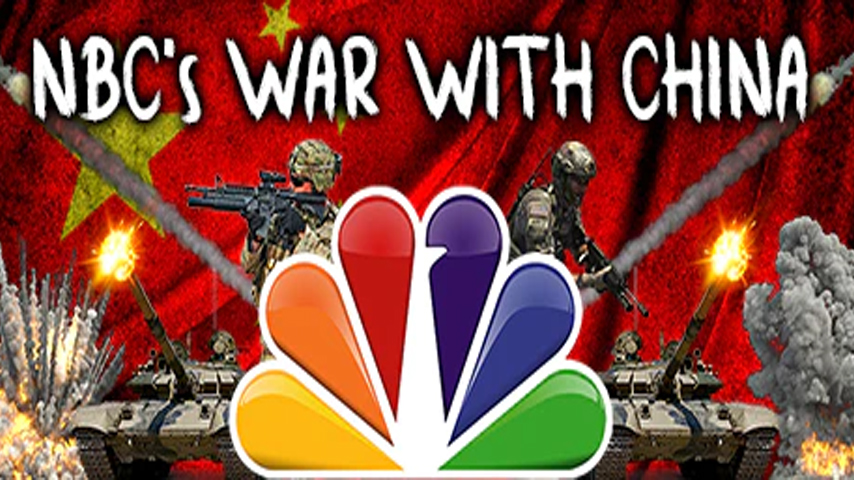 NBC News’ Meet The Press offered their viewers a special treat earlier this month. Under the snappy title “War Games: The Battle For Taiwan,” the “news” channel staged a simulation gaming out what would happen in a full-scale military confrontation between the US and China.

Want to know what happened? Let’s answer the 5 Ws of NBC’s war with China.

WHO Staged the Simulation?

The simulation took place at NBC News’ Washington Bureau, but it was staged by the Center for a New American Security (CNAS).

The CNAS is a Washington think tank that describes itself as a “independent, bipartisan, nonprofit organization that develops strong, pragmatic, and principled national security and defense policies.” As usual, though, if you want to know what the think tank is really about, you’ll have to follow the money. In this case, you’ll find its top two funders are Northrop Grumman and the US Department of Defense (with Palantir, Raytheon, Honeywell, Booz Allen Hamilton and all the usual suspects not far behind), which might explain why it recommends “strengthening nuclear deterrence“; cheerleads the Department of Homeland Security‘s efforts against “domestic terrorism”; ponders how AI and other future technologies can be effectively weaponized; advocates for “enhancing” NATO and bolstering America’s Transatlantic security ties; and fearmongers about China and other bogeymen of the American empire.

WHERE Did the Simulated Conflict Take Place?

As mentioned above, the war game took place at NBC’s Washington studios, but the simulation itself centered on Taiwan.

Described by Meet The Press host Chuck Todd’s as a “self-governed island a little bigger than the state of Maryland that sits about 100 miles off the coast of mainland China at the junction of the East and South China Seas,” the choice of Taiwan for the subject of such a war game is unsurprising. Taiwan’s exact political status has been a point of contention since 1949, when Chiang Kai-shek and the Kuomintang fled there after a series of defeats at the hands of the Chinese communists during the Chinese Civil War. The breakaway Republic of China—with Taipei as its temporary capital—claims to be the rightful government of China. The communist People’s Republic of China, however—led by President Xi in Beijing—claims Taiwan under its “one China” policy.

As those familiar with the Asia-Pacific know, US military planners have long focused on a Chinese invasion of Taiwan as a likely flashpoint for war in the region. This latest war game is just the latest example.

WHEN Was the Simulation Set?

The game, formally titled “Dangerous Straits: Battle for Taiwan 2027,” takes place in (you guessed it!) 2027. Specifically, as Todd explains in the pre-amble to the broadcast:

“CNAS drafted the terms of the hypothetical conflict, set five years from now in 2027. With China poised to launch a direct attack on Taiwan to force unification after Taiwan had elected new leadership increasingly defying Chinese pressure, how would the US respond?”

WHAT Happened in the Simulation?

The game consisted of three rounds, with a “game master” from CNAS “determining the reality on the ground after each move.”

In the first round, the “red team” (representing China) invaded Taiwan, first attacking its outlying islands and following that up with an air and missile strike on Taiwan and on US bases in Japan, Guam and the northern Marianas. The blue team (representing the US) responded with bomber attacks on Chinese ships in port and an air battle against Chinese aircraft over Taiwan.

In the second round, the red team launched cruise missiles and hypersonic weapons against Hawaii, taking out the command center on Hickam Air Force Base. The blue team, meanwhile, used submarine forces in the Taiwan Strait to attack China’s warships.

In the final round, the red team attempted to strike Alaska, San Diego and Hawaii and conducted a nuclear test over the Pacific to “make the United States take the nuclear option more seriously.” The blue team concentrated on the fighting on Taiwan specifically, pushing in some of its ships to support the US forces on the ground there.

WHY Was the Simulation Staged?

Ahhh, why did they stage this simulation. Now we get to the heart of the matter. Why indeed did they bother to stage a simulation like this for the cameras and broadcast it across America and around the world?

For those who are able to think two steps ahead, the question answers itself. But let’s examine the possible explanations by considering this question: What are war games like this actually for?

If we take them at face value, they are to help war planners understand their enemy’s position, their motivations, their strengths and any potential weaknesses. They also help to highlight vulnerabilities in the war planners’ own defense and helps them to think through the possibilities in various war scenarios and adjust their plans accordingly.

But as this is The Corbett Report, we won’t take this simulation at face value. So what other functions do war games serve?

For starters, they help to inculcate the idea that these events are likely or even inevitable in the minds of high-ranking officials and others in positions of power. It also helps to prepare those officials for their roles if and when such a situation does play out in real life.

We can look at a “simulation” like Event 201 as having served this purpose, for example, helping to prepare the various participants there (at least, the ones who weren’t in on the plot) for the coming coronavirus pandemic and the drastic moves that would need to be made in the wake of such an event. Notice, for example, that there was an entire session of Event 201 that was dedicated to “Communications Discussion,” which introduced the idea that “bad actors” would use the pandemic crisis to spread “mis- and disinformation” and that such moves as internet shutdowns and drastic censorship measures might be necessary to deal with these developments. If that idea seemed odd or “out there” to any Event 201 participants before they attended the simulation, it probably seemed more plausible—perhaps even likely—after the event.

One obvious way that military war games like this “Battle for Taiwan” could be used to predictively program their participants is to implant in their minds the idea that the threat of China (or whichever geopolitical rival is serving as the bogeyman du jour) is real and imminent. Behold! They could strike at any moment! They could go nuclear! Observe former Under Secretary of Defense Fluornoy’s remark halfway through this simulation that: “The key insight already in this game is: if you have not spent years preparing for this—pre-positioning munitions, getting the Taiwanese ready, pre-positioning your own forces, developing your dispersal bases—if you haven’t spent years preparing for this, then you’re going to be behind the eight ball the whole way.”

It isn’t hard to understand why a Northrop Grumman or a Raytheon might think it worth their money to sponsor organizations that help to put ideas like this in the minds of high-ranking government advisors.

But there’s another factor for consideration with this particular war game: this simulation was specifically staged for the NBC News cameras with the express intent of broadcasting it around the world. In this case, the primary target of the indoctrination was not the government officials or think tank insiders who were participating in the game—although surely they were indoctrinated, too—but the viewing public. And what is the message of this broadcast? War with China is coming! Be afraid!

And as bad as all of this is, it’s of course much, much worse. Keep in mind, this is just one simulation that was conducted on one day, and this game was actually meant to be seen by the public. In fact, these types of war games, military planning sessions and readiness exercises are happening all the time, they’re just usually not noticed by the public. Just this past week, our friends at the RAND Corporation released a “research report” exploring “Implications of a Coercive Quarantine of Taiwan by the People’s Republic of China.” These types of scenario planning documents serve to predictively program the future combatants of the coming ginned-up Great Power war. When armed conflict actually starts to unfold it will seem so familiar to them that no one will ever stop to consider how the war planners got it so right.

But here’s the real kicker: In one of those amazing coinky-dinks that just happen to take place around “simulations” like these, just days after the NBC-hosted war game took place the people who write Biden’s teleprompter script decided that now is the perfect time to stir up the hornet’s nest, drop their long-held policy of strategic ambiguity, and officially declare that the US is committed to defending Taiwan from the Chinese invasion that everyone knows is right around the corner.

Funny timing, that. I guess we’ll just chalk it up to the uncanny foresight of those galaxy brains over at CNAS and the fine folks at NBC News, hey?

30 Bioweapons Labs Were Commissioned By Pentagon In Ukraine