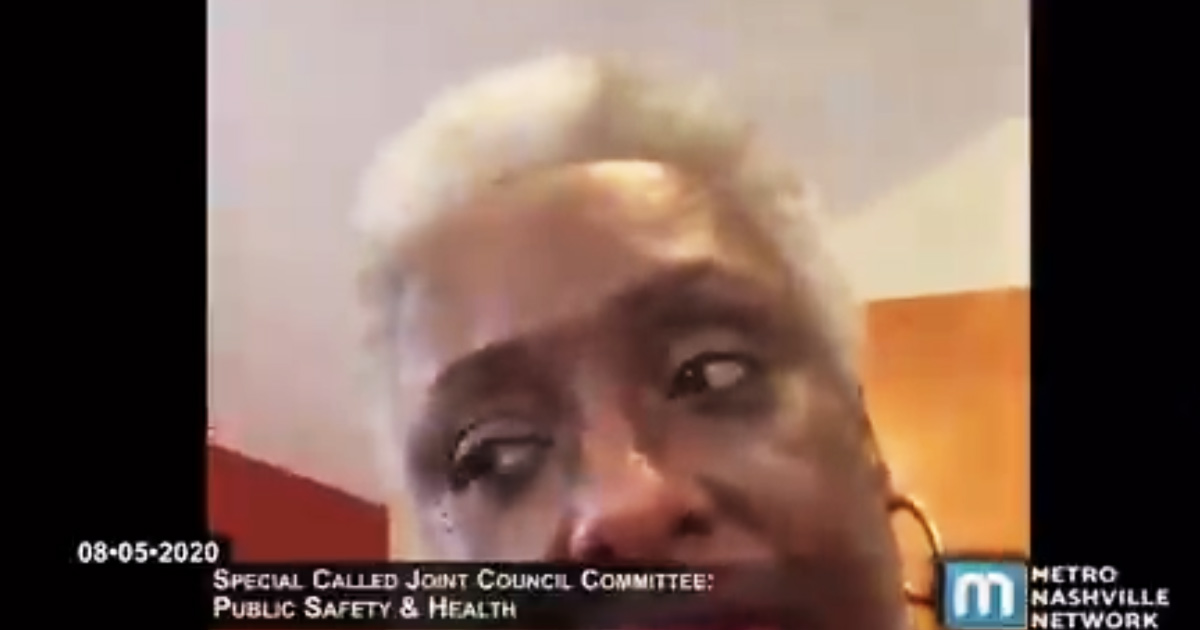 A councilwoman in Tennessee is suggesting extreme penalties for those who go out and about during the coronavirus pandemic without wearing a mask.

She thinks they should be charged with attempted murder, at least in some cases.

Nashville Metro Councilwoman Sharon Hurt made the suggestion at an Aug. 5 meeting of the city’s Public Safety, Beer & Regulated Beverages and Health, Hospitals, & Social Services committees, according to the Washington Examiner.

“My question goes back to legislation,” Hurt said. “But my concern is, you know, I work for an organization that if they pass a virus then they are tried for murder or attempted murder if they are not told, and this person who may very well pass this virus that’s out in the air because they are not wearing a mask is basically doing the same thing to someone who contracts it and dies from it.”

“It seems to me that we have been more reactive as opposed to proactive and a little too late, too little,” she continued.

This is an insane proposition.

This is particularly true when you consider that the vast majority of those who do contract the coronavirus will not only recover but will suffer only mild symptoms.

Moreover, with a virus as transmissible as the coronavirus, it is almost impossible to identify who transmitted it to whom.

It’s notable that while this city councilwoman wants to implement criminal penalties for failure to wear a mask, others on the left recently pushed for lighter penalties for those who knowingly and intentionally transmit HIV, a lifelong infection with no known cure.

That push had nothing to do with public health surrounding the disease: Rather, advocates wanted to reduce stigma related to the disease and LGBT individuals.

Second, while masks certainly reduce transmission of the coronavirus, their true efficacy is as yet unknown, not to mention largely dependent on the type of mask and whether it is worn correctly.

And now the experts are suggesting that even a medical-grade mask isn’t doing enough to stop the virus; earlier this month, Dr. Anthony Fauci, the director of the National Institute of Allergy and Infectious Diseases, said people should add goggles or face shields to their corona-wear.

Nashville Mayor John Cooper has even ordered the Metro Nashville Police Department to issue citations to people not complying with the local mask mandate, WSMV-TV reported. On Aug. 6, police issued 16 such citations, according to WZTV-TV.

Luckily, Jameson pushed back against Hurt’s ludicrous suggestion that potential penalties should include murder charges, albeit based on a legal technicality rather than a substantive argument.

“The council does not have the opportunity on its own to create criminal legislation; that is a state creature,” Jameson told Hurt, who expressed disappointment with his response.

It would be ridiculous to threaten people with decades in prison, not to mention a violent felony charge, simply for failure to wear a mask — something, it should be noted, no one in America was asked to do until just a few months ago.

There is perhaps no better example of government overreach than a decree stating “cover your face with a piece of cloth or face significant jail time.”