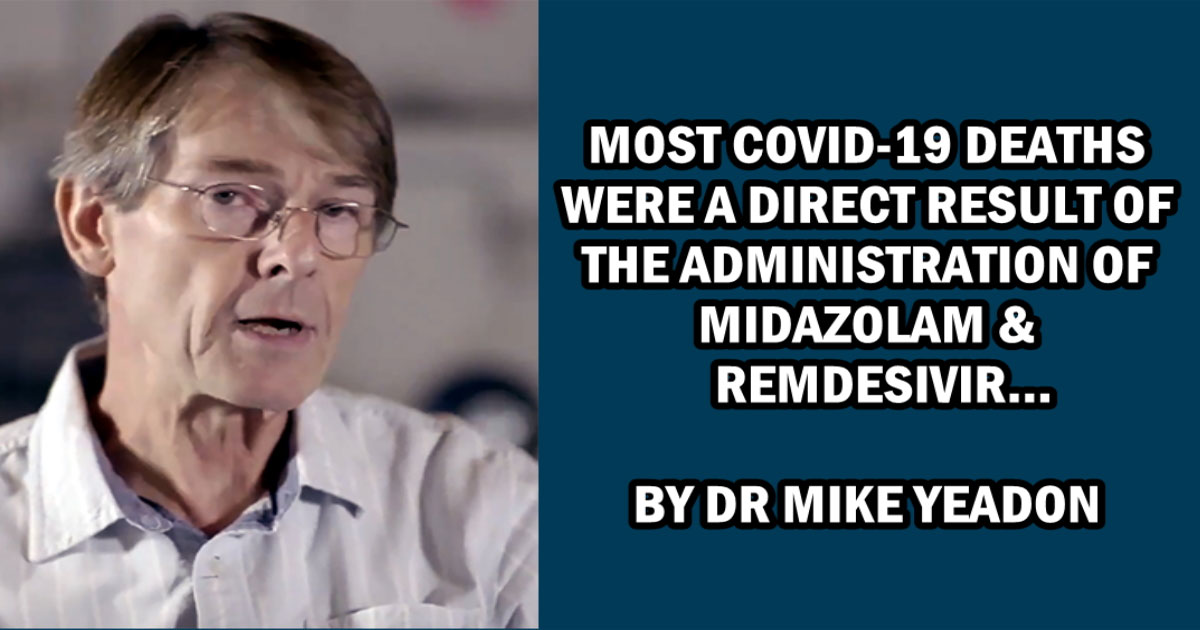 I often see Dr. Anthony Fauci on TV or quoted in newspapers. So it seemed a good moment to outline the part of the story that I know about.

Fauci is a ghastly inhuman person. Watch Cary Mullis’ last interviews. Scientifically, he drew a bead on Saint Fauci over the AIDS scandal. AZT (Wellcome) was a toxic drug from anti-cancer & immunosuppression research, being an analog of the bases used in genetics.

I recall being very surprised that its clinical safety profile was adequate to permit dosing in HIV/AIDS. I was a young post-doc, coincidently newly hired to research in Wellcome & watched it gain approval. I had lots of trust in institutions then.

Turns out that many American & European gay men were killed by this wretched drug (not so much of a surprise now) and billions were made, and I’m sure relationships were formed between Fauci, certain drug companies & regulators, which stood in profitable stead over subsequent decades.

The PCR test for viruses was a huge turning point. Mullis repeatedly stated that it isn’t an appropriate technique for diagnostics. I think it could be, under carefully calibrated conditions. But it certainly is not, used as it is around the world to diagnose Covid-19.

Fauci slid Remdesivir into treatment guidelines almost, it seems, based on his say so.

He hadn’t treated patients for decades if he ever did.

Remdesivir as ‘standard of care’ for Covid-19 resulted in huge numbers of avoidable deaths. How it is that medics appear not to know the characteristic toxicity (which includes renal function declines) & just put their patients on this stuff? I don’t know.

I’ve personally intervened in at least three cases where Remdesivir had been started in patients hospitalized with Covid-19.

I’m not a medic so my approach has been to recommend the anxious relative demand an immediate second opinion. They’re all alive. One is the husband of a friend of my sister’s.

Note also that respiratory viral illness isn’t obstructive. Patients can become distressed if their gas exchange is poor & they’re desaturating. But they don’t need mechanical ventilation coupled with sedation. Instead, an oxygen mask or nasal cannula will often help a lot, and if it doesn’t, your patient may be unsalvageable.

In the U.K. the early default was sedation with excessive doses of midazolam & ventilation. Very few people lived through that.

The U.K. Department of Health had purchased a two years supply of midazolam in spring 2020. The NHS had also stockpiled a year’s supply by hugely reducing prescriptions for it in 2018-19.

So during the Great Panic of spring 2020, they found it appropriate to burn through 3 years supply of midazolam.

Dodging protocols. they administered 10 times the usual dose. No wonder so many elderly men died.

Do you recall the debates in U.K. parliament about whether the NHS had enough syringe drivers? These were needed to administer the fatal & inappropriate medications.

So the PCR test was intrinsically unsuitable as a diagnostic and was used to over-diagnose “Covid-19”. Whilst most subsequent deaths were either in people whose imminent death wasn’t a surprise (age + pre-existing chronic illnesses) or occurred directly as a result of hopelessly inadequate medical interventions & drug treatments.

Virtually none died SOLELY because of infection with this virus. Many were murdered or at least due to unthinking medics “only following orders”.

Fauci was part of the suppression of emerging, effective pharmacological treatments like hydroxychloroquine & ivermectin.

How died he come to wield such power?

As director of the National Institute of Allergy & Infectious Diseases (NIAID), his external budget was for Research.

Over time, Fauci became the gatekeeper to huge sums which could make or break institutions in the US university estate.

That’s why very few speak out, such as Dr. Peter McCullough. He’s lost everything except his medical license.

All major corporates especially the media, tech titans, financial services & pharmaceuticals, are in on what’s happening even if they’re no real insights into why it’s happening.

Obviously, some actors do have excellent knowledge of what’s happened and are due to happen. Pharma made these fraudulent gene-based “vaccines” and cheated their way across the regulatory agencies to obtain Emergency Use Authorisations.

Fear mongering, lies, induction of mass psychosis in most populations, coupled with long-drawn-out “measures”, especially masks, primed huge proportions of the population to line up to receive their “vaccinations”.

Despite being horribly injurious & killing scores of thousands in the USA alone, they’re closing in on herding us onto a vaccine passport platform.

Many have worked out that vaccine mandates are absurd, since most people aren’t at risk from this virus, but they’ve no idea why.

A small number of us understand that this is about control & that if a Vaccine Passport is required to buy food, humans will have surrendered their freedoms, forever.

We’ll be required to line up for regular injections in order to retain any access to our old normal lives,

Ask yourself, is this the future you want for your children & grandchildren?

If you don’t, then I make this sincere request of you:

If unvaccinated, NEVER comply with their demands that you get vaccinated.

If vaccinated, I hope you do not experience adverse events. But if offered back some of your freedoms in exchange for your compliance with a Vaccine Passport scheme wherever you are, DO NOT COMPLY.

Whatever they’re up to, it’s completely illogical to mandate an experimental treatment that’s unable to prevent transmission of a virus that’s no threat to most people.

If we can prevent the establishment of a common Digital ID, aka vaccine passports aka VaxPass, the perpetrators can smash the economy but they won’t own or control us.