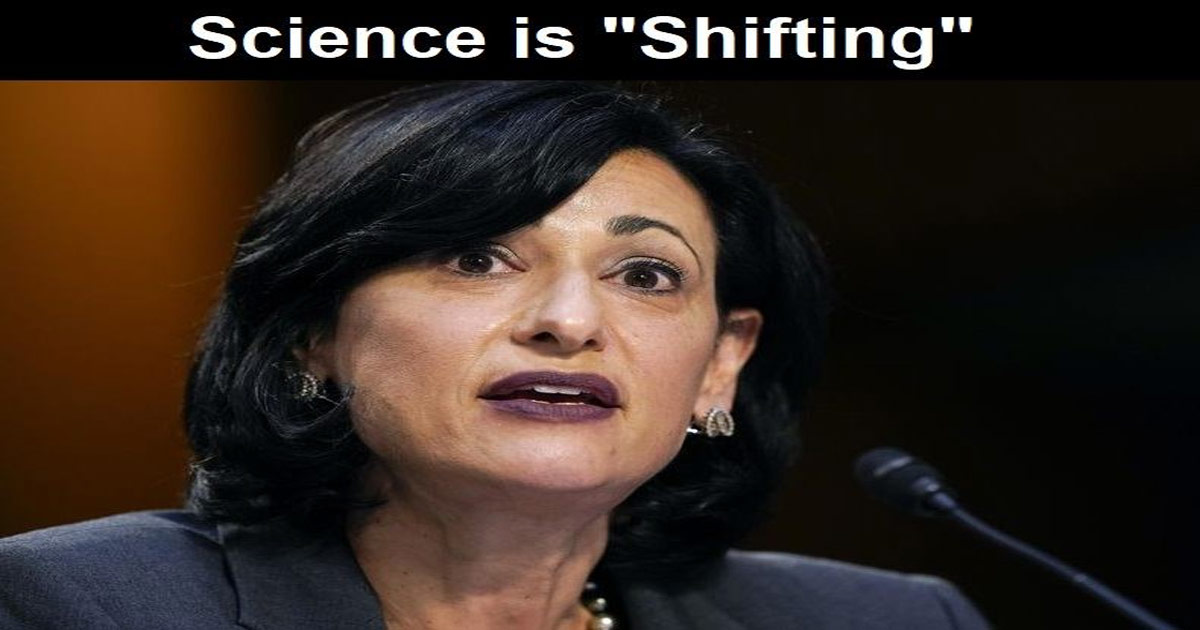 Those of us in the alternative media who have been exposing the dangers of vaccines for years, have had to deal with the attacks and ridicule from the vaccine believers who parroted the one statement that always ended any debate on the subject of vaccines, which they claimed were responsible for eliminating most of the world’s infectious diseases:

The science is settled. Vaccines save lives.

Writing and reporting on this topic for more than a decade now, I have constantly told our readers that this statement, “The science is settled,” is one of the most unscientific statements the health bureaucrat “doctors” at the alphabet letter agencies have ever made, because when is the “science” ever settled?

Never mind the fact that the rate of autism among our children has increased from one in ten thousand to one out of every 50 children in the U.S. as the CDC childhood vaccination schedule ballooned over the years. Never mind that the U.S. has the highest infant mortality rate in developed countries along with the highest amounts of vaccines injected into children from birth to age 18 among the developed countries.

So to all my fellow truth seekers in the alternative media who have been ridiculed for many years for publishing the truth about vaccines and the injuries and deaths they cause because “the science is settled,” we were all just vindicated yesterday by CDC director Rochelle Walensky, who announced to the world that people fully vaccinated for COVID-19 were spreading the “delta variant” and that it was now time to mask up again, just weeks after they announced that people fully vaccinated for COVID-19 no longer needed to wear masks, because: THE SCIENCE IS SHIFTING.

Imagine that. The “science” behind vaccines isn’t settled after all. We “conspiracy theorists” were correct all along, because the science is never settled, because the scientific method inherently can never prove anything, only provide theories that are subject to revisions as more data becomes available, and the universe is far too large for anyone to ever claim they have ALL the data, unless your name is “God Almighty, the Creator.” (More info here – and no Anthony, we didn’t just mention your name – go back to your adrenochrome stupor.)

In yesterday’s public address by the shifty CDC director Rochelle Walensky, not only did she announce that people fully vaccinated were spreading the COVID-19 delta variant to others requiring people to mask up again, she also stated:

“But the big concern is the next variant that might emerge, just a few mutations potentially away, could potentially evade our vaccines.”

Wow, sounds like it is time to admit these vaccines are a colossal failure and should be scrapped altogether, right?

Nope, instead she told America and the world that everyone who is not yet “vaccinated” needs to immediately go out and get one of the shots to stop the spread of this variant to make sure this doesn’t happen. And mask up again in the meantime.

Is this not the textbook definition of “insanity?” Is the United States just becoming one large asylum for the insane?

I did a search again today in the corporate media for “breakthrough cases” and could hardly believe what I found: Interviews with people who were fully vaccinated and had now become sick along with a COVID-19 positive test, and also spreading it to their friends and family members who are also fully vaccinated, and yet, they claim the vaccines “are working,” because if they had not received one of the COVID-19 injections, they would have been far sicker.

How could you even prove that?? But that’s what people are actually believing, as they follow the propaganda and shake their fists at those of us who are not vaccinated, blaming us for all these outbreaks.

Is this not insanity? Is anyone else waking up in the morning like I am, and asking yourself: “How could this all be real??”

Here is an example with an article published yesterday on NBC26 in Green Bay, Wisconsin.

‘Would have been definitely hospitalized’: Two fully vaccinated people share their stories of COVID-19 breakthrough cases

With COVID-19 cases rising nationwide, reports of breakthrough cases among the fully vaccinated can be a real concern.

Two fully vaccinated people who recently contracted the Coronavirus are currently in isolation and share their stories.

“I had these body aches and pains that I’ve never experienced before. My hands hurt, down to the fingertips and hands, they were sore and achy,” Ramseier said. “Had the teeth chattering chills and the sweats and all that.”

He said he left work early that day and the next morning he received the news he was dreading to hear.

“Sure enough Thursday morning I woke up, slept miserable that night. Had the teeth chattering chills and the sweats and all that. Awful Thursday morning and my phone rang at 11:03, it was my doctor. I answered and I said ‘uh oh’ and he says ‘yeah you’re positive and you’re the first one in our clinic here that has a breakthrough case,” Ramseier said.

Though fully vaccinated Ramseier still contracted the virus and passed it to his loved ones.

His wife who is also fully vaccinated got it along with his two small children who are not.

His mom who happened to be visiting for the first time since the pandemic also contracted the virus. She was fully vaccinated as well.

“It’s just like uhh this happened. There’s a lot of guilt with that I’ve had to process. I know its not as fair for me to feel that way but boy it was a weird pill to swallow knowing that we waited all this time and now we sit here and she has COVID,” Ramseier said.

His mom has multiple sclerosis so it was a real concern for their family.

“If she wouldn’t be vaccinated I just can’t imagine how bad it would have been for her or myself included. I don’t have MS but I also have an autoimmune disease and asthma, I certainly fall into the high risk category for this,” Ramseier said. (Full story.)

And just remember, the CDC and the corporate media are censoring the CDC’s own data from their own database that tracks reported cases of injuries and deaths following the COVID-19 injections. 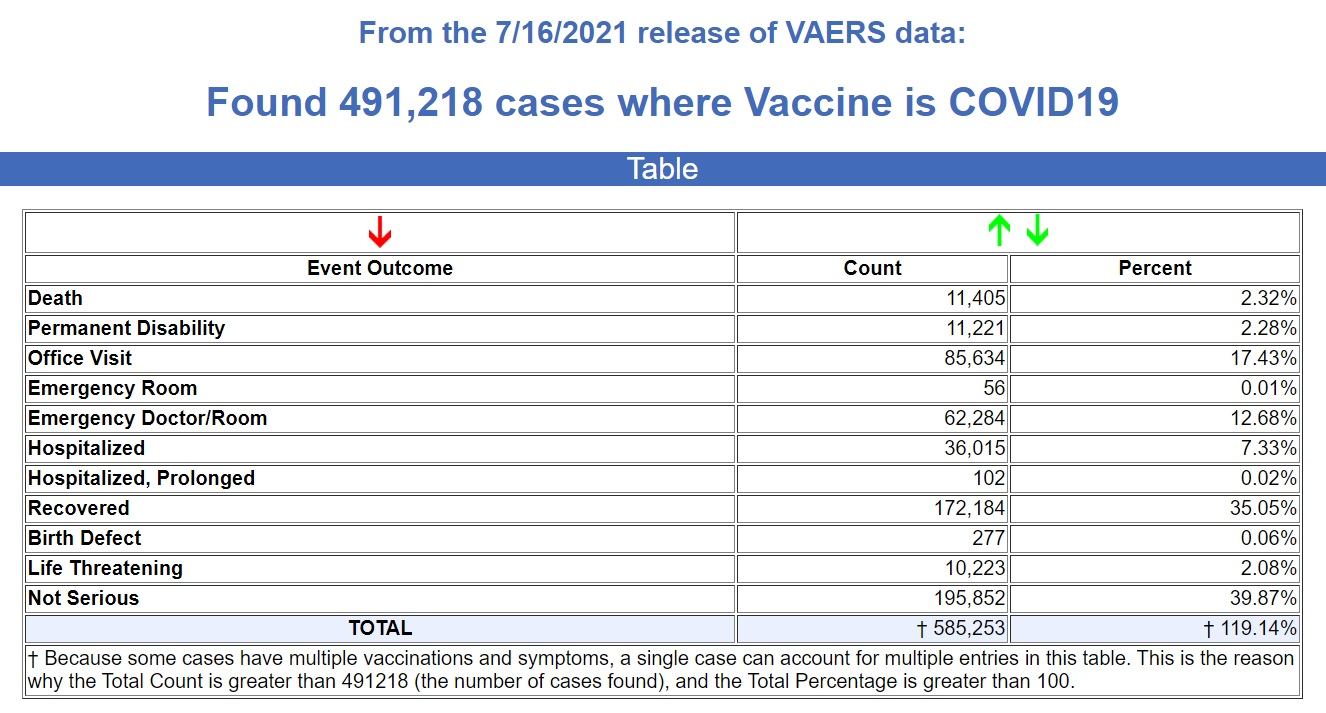 As of last Friday, the CDC’s own statistics list 11,405 deaths, 11,221 permanent disabilities, over 60,000 hospitalizations, and 10,233 life threatening injuries following the COVID-19 injections.

I saw a meme on social media today that gave me some hope that there are at least a few people left who have not been overtaken by the REAL pandemic, which is obviously a pandemic of the insane. 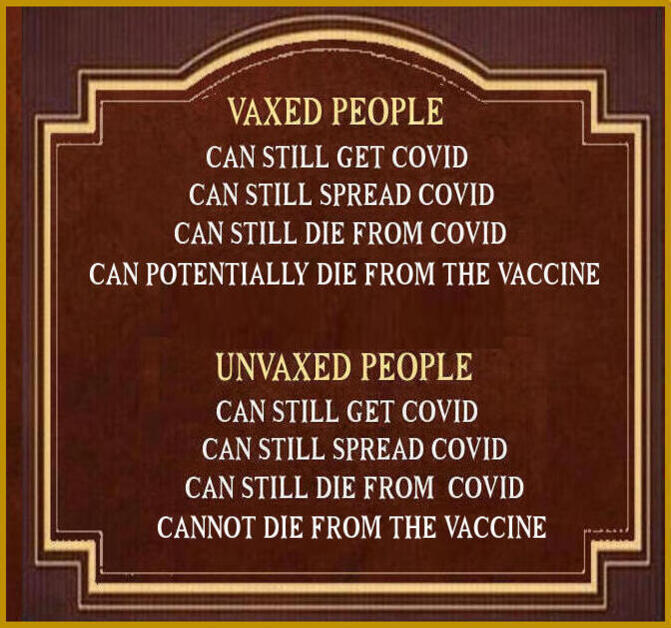 That looks like a meme from someone who is actually sane. What do you think?