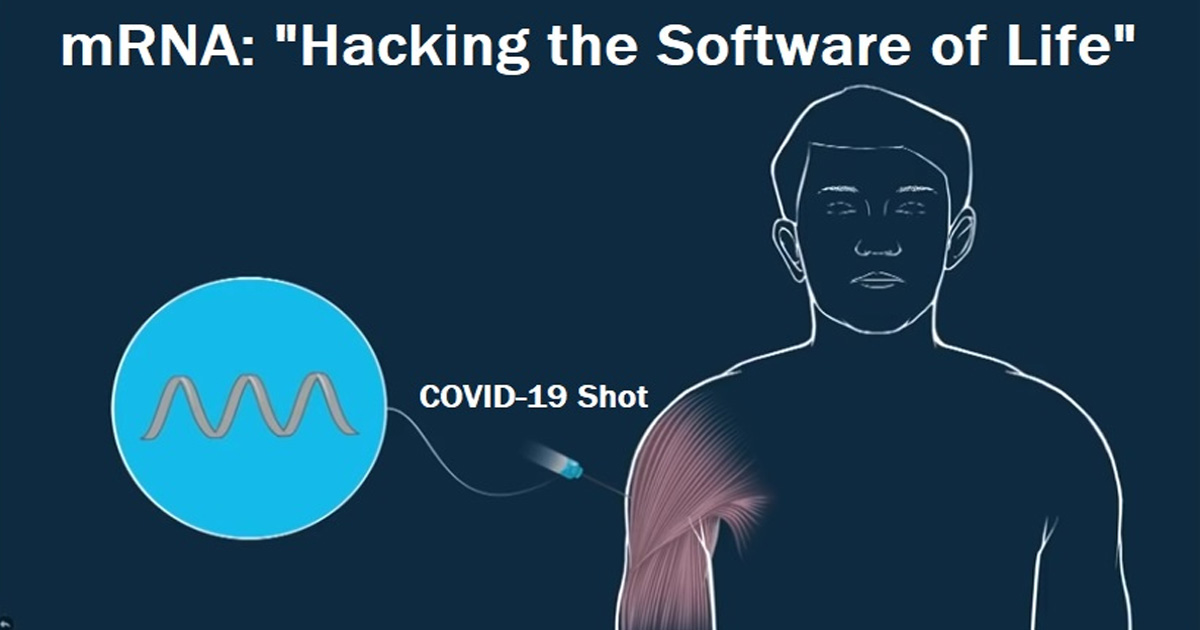 Veteran investigative reporter Leo Hohmann has discovered a 2017 Ted Talk presentation by Dr. Tal Zaks, the chief medical officer at Moderna Inc., where he clearly explains in layperson’s language just what the mRNA technology does in vaccines.

As Dr. Zaks clearly states, they are “hacking the software of life,” by injecting their own genetic code into humans.

What we are witnessing in this new class of “vaccines” is clearly the wedding together of digital technology born out of the computer age, with Darwinian biology and medicine.

In short, the new technocrats of medicine actually believe they can improve the design plan of human beings, replacing God.

This is not a conspiracy theory, as they are very arrogant and very open about just what they dream about achieving.

This is first and foremost a belief system, with very little to no science involved to back up their claims.

We are quickly moving from the realm of science fiction and entertainment, such as we see in Hollywood presentations such as Star Trek, where humans can be disassembled and transported (beamed) through space and miraculously put back together instantly, or food can be “replicated” at the push of a button, to real-life experiments based on these beliefs by Billionaire psychopaths who have nothing better to do with their wealth other than try to improve upon the human race.

Welcome to the brave new world of post-COVID, and the transhumanist agenda.

The software engineers of yesterday, who cannot even create a virus-free computer operating system, are now in charge of the “software of life” and working together with the Big Pharma criminal cartel. They also fund and control what is broadcast in the corporate media.

What could possibly go wrong?

Moderna’s Top Scientist: ‘We Are Actually Hacking The Software Of Life’

Dr. Tal Zaks, the chief medical officer at Moderna Inc., explained in a 2017 TED talk how the company’s mRNA vaccine was designed to work.

“we’ve been living this phenomenal digital scientific revolution, and I’m here today to tell you, that we are actually hacking the software of life, and that it’s changing the way we think about prevention and treatment of disease.”

He went on to explain [see video below] that the human body is made up of organs and organs are made up of cells.

In every cell there’s this thing called messenger RNA or mRNA for short, that transmits the critical information from the DNA in our genes to the protein, which is really the stuff we’re all made out of.

This is the critical information that determines what the cell will do. So we think about it as an operating system.


I reported on Feb. 4 that Moderna describes its new vaccine as “a computer operating system” but I was not aware at that time that Zaks had spoken three years ago about this, totally debunking the establishment media’s lie that mRNA vaccines don’t alter your genetic code.

He could not be more clear when he said “We are actually hacking the software of life.”

Zaks stressed that in 2017 his company was working on a vaccine that would not act like any previous vaccine ever created.

“Imagine if instead of giving [the patient] the protein of a virus, we gave them the instructions on how to make the protein, how the body can make its own vaccine,” he said.

Zaks said it took decades to sequence the human genome, which was accomplished in 2003, “And now we can do it in a week.”

Interestingly, one of the most potentially catastrophic side effects of the mRNA vaccine is its interaction with cancer cells.

According to a study at New York City-based Sloan Kettering Cancer Center, the mRNA has a tendency to inactivate tumor-suppressing proteins, meaning it can promote the growth of cancer cells.

Both the Moderna and Pfizer injections are experimental mRNA vaccines. The FDA has only granted these injections Emergency Use Authorization [EUA] and they will remain in trials through 2023, yet the government, media, and corporations are all promoting them as though they are guaranteed safe.

This systemic deception will, in my opinion, end up being judged in the rear-view mirror of history as one of the most reckless acts of medical treachery ever committed against the human race.

If this so-called vaccine does cause more people to get cancer, think of the possibilities from a purely business point of view.

Based on the predictions of Dr. Zaks, who oversaw the creation of the vaccine now being given to millions of people worldwide, the same Big Pharma companies that could potentially give people cancer with one vaccine could step forward later with another vaccine offering the cure for cancer.

If you are the CEO of a mega pharmaceutical who answers to profit-driven Wall Street shareholders, that’s a brilliant strategy!

But is it ethical from a medical point of view? That’s a question nobody is asking.

As I listen to Dr. Zaks lay out the achievements of his company in creating the mRNA vaccine, I cannot help but think of how incredibly arrogant it sounds.

That scientists think they can rewrite the genetic code [his words not mine for all you out there who still don’t believe these mRNA vaccines change the genetic code just because some ‘fact checker’ says they don’t], believing they can improve on a person’s God-given genetic makeup is entering dangerous territory.

Who’s to say they won’t correct one problem and create something far worse?

Zaks wrapped up his 2017 speech with the following words.

These scientists truly believe that the human body is nothing more than a machine that can be hacked into and reordered according to some programmer’s instructions.

The same ground-breaking nature of this research that excites some, is what horrifies others.

A person’s genetic makeup is, as Dr. Zak said, “the software of life.”

If this is true, then who should be the ultimate authority over each human being’s genetic software code?

If we truly live in a free society, wouldn’t it stand to reason that we would want to have an energetic debate over how to answer that question?

Shouldn’t it be the number-one issue being debated in Congress and the media?

Instead, nobody is allowed to even ask these questions without being threatened, censored, rebuked, de-platformed. Members of the corporate media who dare broach the question get fired.

Contrary to what some scientists believe, we are not machines. We are human beings with bodies, souls, and free wills.

Anyone who tries to mandate the acceptance of an experimental gene-altering treatment is going against the international Nuremberg Codes, which require the informed consent of any experimental treatment.

Dear readers: Please do not allow your employer, your government, your family, your friends, or anyone else to intimidate you, or in any way try to persuade you, to accept this experimental treatment if you do not want it.

You are your own health authority, period. If your employer threatens you with termination for rejecting this injection, please contact an attorney.

Sources: HealthImpactNews.com; LeoHohmann.com / Thanks to Patrick Wood of Technocracy News for publishing this.