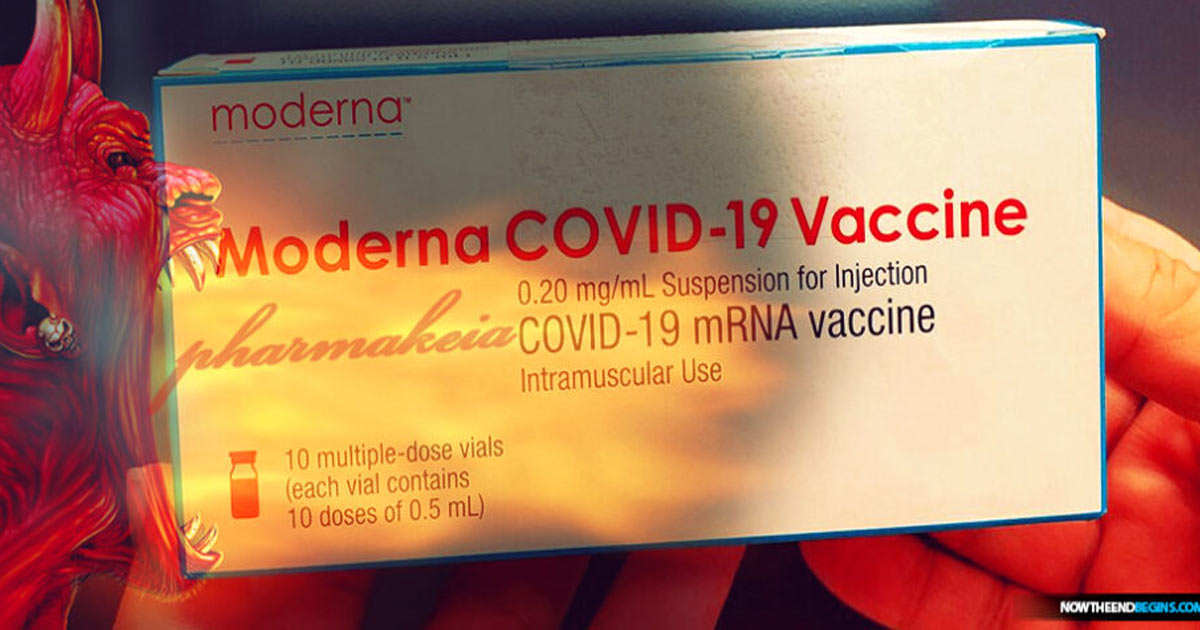 If you can hack the rules of mRNA, “essentially the entire kingdom of life is available for you to play with,” says Hoge, a physician by training who left a position as a health care analyst to become Moderna’s president in 2012.

If you don’t think that all these very rich biotech titans are not consumed with the idea of world domination, you would be very much mistaken.

Nearly every, single person who has become a billionaire in biotech also has a massive ‘messiah complex’ in which they rule all people and make them bow to their authority.

Moderna is one such company, and having received untold millions from the Bill and Melinda Gates Foundation, actively fantasize about using their new mRNA vaccine technology to ‘hack the kingdom of life’. But beware, there is ‘death in the pot’ for those who have ears to hear and eyes with which to see.

“And the rest of the men which were not killed by these plagues yet repented not of the works of their hands, that they should not worship devils, and idols of gold, and silver, and brass, and stone, and of wood: which neither can see, nor hear, nor walk: Neither repented they of their murders, nor of their sorceries, nor of their fornication, nor of their thefts.” Revelation 9:20,21 (KJB)

We find in Revelation 9, verses 2o and 21, the Greek word ‘pharmakeia’ is translated in the passage as ‘sorcery’.

Not coincidentally it is also the word from which we get the word ‘pharmacy’, as in a place where you can receive the COVID-19 mRNA vaccine jab.

Or, you can roll the dice, have them inject this sorcery into your body, and see what happens. It’s really that simple. But I would click here first before you do.

From ScienceMag: Moderna was founded on the idea that messenger RNA (mRNA), the molecule that relays genetic instructions from DNA to the cell’s protein-making machinery, could be re-engineered into a versatile set of drugs and vaccines.

These strands of instructions could teach our cells to make whatever was needed to treat or prevent disease—virus-slaying antibodies, waste-gobbling enzymes, heart-mending growth factors.

The willingness of pharmaceutical giants and investors to bet on that premise to the tune of nearly $2 billion has unleashed waves of both hype and skepticism.

Moderna has shared little detail in published papers about the technology it’s developing, though there are clues in its abundant patent filings.

Until recently, even the targets of drugs already in clinical trials weren’t publicized. But as more trials get underway, Moderna is gingerly opening up.

The company agreed to Science‘s request for access to some of its researchers and labs over the past few months.

And last month, at the annual J.P. Morgan Healthcare Conference in San Francisco, California, CEO Stéphane Bancel unveiled Moderna’s first round of drug candidates, which include vaccines for Zika and flu, and therapy for heart failure.

Expectations are high. Being a startup valued at more than a billion dollars — an anomaly that venture capitalists dub a unicorn — comes with scrutiny, and many wonder whether Moderna’s pipeline, consisting mostly of vaccines, for now, will expand to match the company’s original vision of mRNA as a broad treatment platform.

“There were a lot of really big promises made,” says Jason Schrum, a biotechnology consultant in San Francisco and a former Moderna employee.

“That’s what people latched onto; they want the promises to be true, and they want to see the investment really turn it into something meaningful.”

In other words, the trough of disillusionment, if it’s still ahead, threatens to be deep.

Hacking The Kingdom Of Life

The vision of an mRNA drug has beguiled scientists for decades.

“Any protein target where you can think of a potential therapeutic, you can approach that with mRNA.”

The single-stranded molecule sets up a temporary protein factory outside a cell’s nucleus and attaches to ribosomes.

This cellular machinery translates its sequence of four kinds of nucleosides — adenosine, cytidine, uridine, and guanosine — into a protein. Then it degrades within a day.

Assembling these chemical instructions could be a faster and more adaptable way to make drugs than manufacturing the individual proteins themselves in large bioreactors.

And it would allow scientists to deliver proteins that act inside cells or span their membranes, which are a challenge to introduce from the outside. An mRNA drug would also be easier to control than traditional gene therapy.

Like mRNA, gene therapy can induce cells to make therapeutic proteins, but it typically introduces DNA that can integrate unpredictably into the genome.

If you can hack the rules of mRNA, “essentially the entire kingdom of life is available for you to play with,” says Hoge, a physician by training who left a position as a health care analyst to become Moderna’s president in 2012.

“It’s what your genes would do if they were rational actors.”

Moderna now has more money to throw at those molecules than most biotechs can dream of, though it’s far from the only group chasing mRNA drugs.

The German biotech CureVac, for example, has brought mRNA-based vaccines for rabies and cancer to clinical trials, and Karikó now heads a research team at BioNTech in Mainz, Germany, that focuses on mRNA-based drugs.

But few companies have delved into nucleoside engineering the way Moderna has or pursued such a broad range of diseases from the start.

It has about 430 full-time employees, spilling across three buildings around biotech-dense Kendall Square. Higher-ups are identified by black-and-white headshots hanging at their office doors.

Holding its data close doesn’t seem to have hurt Moderna’s ability to raise money and advance its drugs.

But now that treatments are being injected into people, “there’s a certain obligation to patients to start to tell that story,” Hoge says.

The company has submitted several manuscripts to journals, and last month described the collection of drugs in its pipeline.

CRISPR/Cas9 gene editing creates massive DNA damage in living organisms and they still want to use it to get rid of Covid!