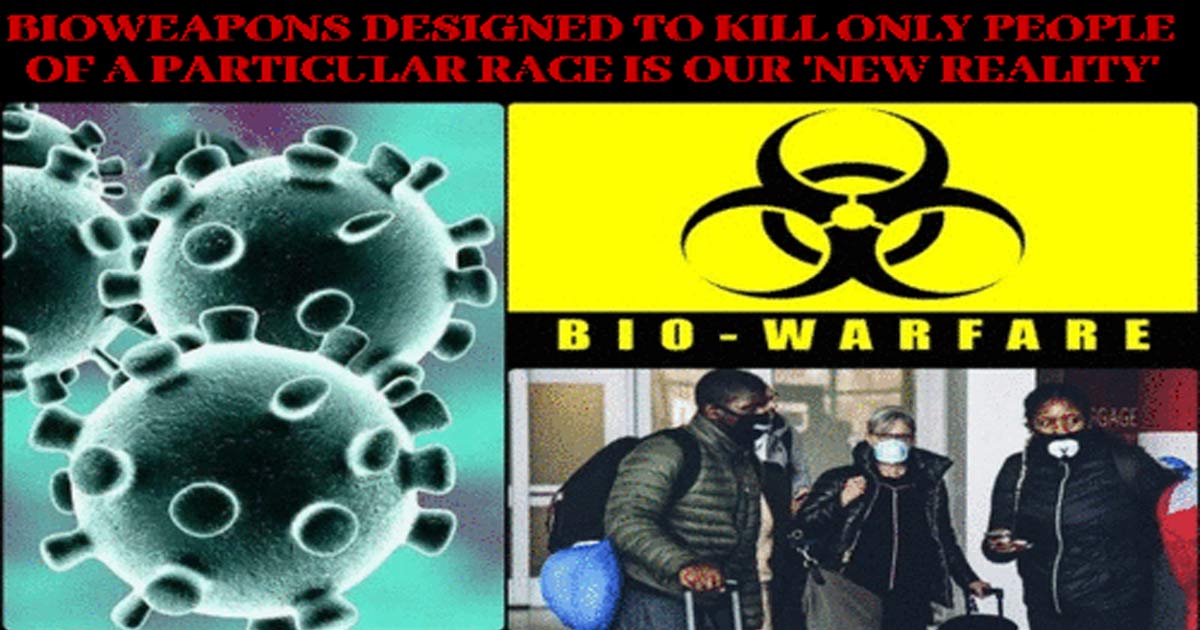 With federal authorities urging an immediate pause to the Johnson and Johnson single dose vaccine after several people were reported to become ill within weeks after getting the vaccine with what is being called ‘a rare blood clotting disorder’, we have to take a look back at an interview we posted in this April 11th ANP story titled “‘Eugenicists Have Control Of The Levers Of Power’ Former Big Pharma Insider Warns As World Is Herded Like Sheep To The Slaughter – Lethal Injections For All If The Globalists Get Their Way”

Reporting within that story that former Pfizer Vice President Dr. Michael Yeadon had recently given an interview to Life Site News on why Americans and people across the world should avoid ‘the jab’ at all costs, Dr. Yeadon brought up something that we absolutely have to dive into more deeply in this story, the relative ease of the globalists using bioweapons to directly and specifically target ‘a single individual’, ‘community’, ‘race’ or ‘ethnicity’.

Warning us: “If you wanted to introduce a characteristic (within the ‘vaccine’) which could be harmful and could even be lethal, and you can even tune it to say ‘let’s put it in some gene that will cause liver injury over a nine-month period,’ or, cause your kidneys to fail but not until you encounter this kind of organism [that would be quite possible], biotechnology provides you with limitless ways, frankly, to injure or kill billions of people.”

So with the very real possibility that people will become sick or even die at any point following their getting ‘the vaccine’, and we use that word lightly with these ‘shots’ actually being mRNA injections that may permanently alter ones DNA, Dr. Yeadon’s warning also ties in directly to Deagel’s forecast of a greatly depopulated America by the year 2025, the year they forecast America’s population to be down to 99 million people from the over 333 million people of 2020. So once again, from this absolutely critical Life Site News story before we continue.:

1) There is “no possibility” current variants of COVID-19 will escape immunity. It is “just a lie.”

2) Yet, governments around the world are repeating this lie, indicating that we are witnessing not just “convergent opportunism,” but a “conspiracy.” Meanwhile, media outlets and Big Tech platforms are committed to the same propaganda and the censorship of the truth.

3) Pharmaceutical companies have already begun to develop unneeded “top-up” (“booster”) vaccines for the “variants.” The companies are planning to manufacture billions of vials, in addition to the current experimental COVID-19 “vaccine” campaign.

4) Regulatory agencies like the U.S. Food and Drug Administration and the European Medicines Agency, have announced that since these “top-up” vaccines will be so similar to the prior injections which were approved for emergency use authorization, drug companies will not be required to “perform any clinical safety studies.”

5) Thus, this virtually means that the design and implementation of repeated and coerced mRNA vaccines “go from the computer screen of a pharmaceutical company into the arms of hundreds of millions of people, [injecting] some superfluous genetic sequence for which there is absolutely no need or justification.”

6) Why are they doing this? Since no benign reason is apparent, the use of vaccine passports along with a “banking reset” could issue totalitarianism unlike the world has ever seen. Recalling the evil of Stalin, Mao, and Hitler, “mass depopulation” remains a logical outcome.

7) The fact that this at least could be true means everyone must “fight like crazy to make sure that system never forms.”

With Dr. Yeadon warning also within that interview that we’re witnessing nothing less than a huge conspiracy between willing participants and willing governments to ‘lockdown the world’ and impose tyranny, and not just ‘convergent opportunism’, any ‘conspiracy’ between ‘ordinary Americans’ to ‘wipe people off the face of the planet’ would be hugely criminal, so why do the ‘global elite’ get a pass?

And as Dr. Yeadon also warns, should these globalists get their sinister way and legislate ‘vaccine passports’ into existence in America, Americans might soon need permission to leave their own homes. Once again, from this Life Site News story. in which Dr. Yeadon warns us about this ‘conspiracy’ that the globalists have planned for us with vaccine passports and an endless series of mRNA injections in our futures. Once again, we’re witnessing ‘incrementalism’ before our very eyes.

“And, yes, certainly crossing an international border is the most obvious use for these vaccine passports, as they are called, but I’ve heard talk of them already that they could be necessary for you to get into public spaces, enclosed public spaces. I expect that if they wanted to, you would not be able to leave your house in the future without the appropriate privilege on your app.

‘Conspiracy’ and not just ‘convergent opportunism.’

“But what I would like to do is talk about immune escape because I think that’s probably going to be the end game for this whole event, which I think is probably a conspiracy. Last year I thought it was what I called ‘convergent opportunism,’ that is a bunch of different stakeholder groups has managed to pounce on a world in chaos to push us in a particular direction. So it looked like it was kind of linked, but I was prepared to say it was just convergence.”

“I [now] think that’s naïve. There is no question in my mind that very significant powerbrokers around the world have either planned to take advantage of the next pandemic or created the pandemic. One of those two things is true because the reason it must be true is that dozens and dozens of governments are all saying the same lies and doing the same inefficacious things that demonstrably cost lives.

So we’ll absolutely take Dr. Yeadon’s excellent advice and fight like crazy to make sure vaccine passports aren’t a thing in our futures, nor are mandatory injections of an experimental big pharma concoction that Mike Adams of Natural News warned in this April 8th story may lead to our bodies churning out prions that ‘eat our brains like mad cow disease’. 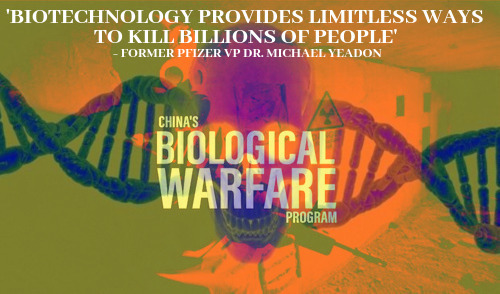 And as we mentioned previously above, what are called ‘ethnic-specific bioweapons’ are very real and not just something out of science fiction or a Hollywood horror movie.

With it relatively easy for someone in that field who has sinister intentions to design bioweapons to kill only people of a particular race or ethnic background, Americans or anyone else could become a target of such a weapon without even knowing it. From this 2019 story over at The Guardian.

Cambridge University warns world must prepare for biological weapons that target ethnic groups based on genetics.

Scientists warn that humans should be worried about being wiped out by a killer pathogen that is specifically designed to kill people of only a particular race, based on their genetic material/ Deoxyribonucleic Acid (DNA).

A new report from Cambridge University’s Centre for the Study of Existential Risk says that world governments have failed when it comes to preparing against threats like futuristic bioweapons powered by Artificial Intelligence (AI) and genetic manipulation. Such weapons would have to power to target specific DNA and kill certain races of people leaving other swaths of the population unharmed.

Imagine it being sprayed in the form of the tinfoil hat conspiracy of chemtrails, and wiping out certain portions of the population. The authors warn: “The technology is becoming increasingly sophisticated at ever-cheaper prices, democratizing the ability to harm more quickly and lethally. In a particularly bad case, a bio-weapon could be built to target a specific ethnic group based on its genomic profile”.

So with it confirmed that a bioweapon could be created and released into the atmosphere via what is known as ‘strategic aerosol injections’, China or some other ‘enemy country’ could quite literally target huge sections of the US population with such a ‘weapon of war’ without the masses even being slightly aware they had been hit with a deadly weapon designed to kill them within a specific period of time.

And with that Guardian story also confirming that governments aren’t doing enough to warn the public about such weapons and not taking steps to prepare for such ‘weapons of the future’, might that simply be because ‘they want us all dead’ as Dr. Yeadon also warned?

With an all-out leftist war upon whites and Conservatives being carried out now before our eyes in 2021, who’d really put it past the globalists to unleash an ‘ethnic-specific bioweapon’ upon Americans to speed up their ‘depopulation agenda’? Not us.

And with China caught ‘harvesting’ the DNA of Americans for years now as we hear in the 1st video below and read in this December 2020 story over at Fox News, as that story warns, according to Gordon Chang, author of ‘The Coming Collapse of China,’ the country’s sinister motivations should be of great concern to the United States. With over 80 million health profiles, China has the largest DNA database in the world, and growing.

In an interview with Fox News, Chang warned that China plans to use this information to create bioweapons designed to target specific ethnic groups. “The coronavirus is not the last pathogen that will be generated from Chinese soil. And so we’ve got to be concerned that the next disease is more transmissible and more deadly than the novel coronavirus,” said Chang.