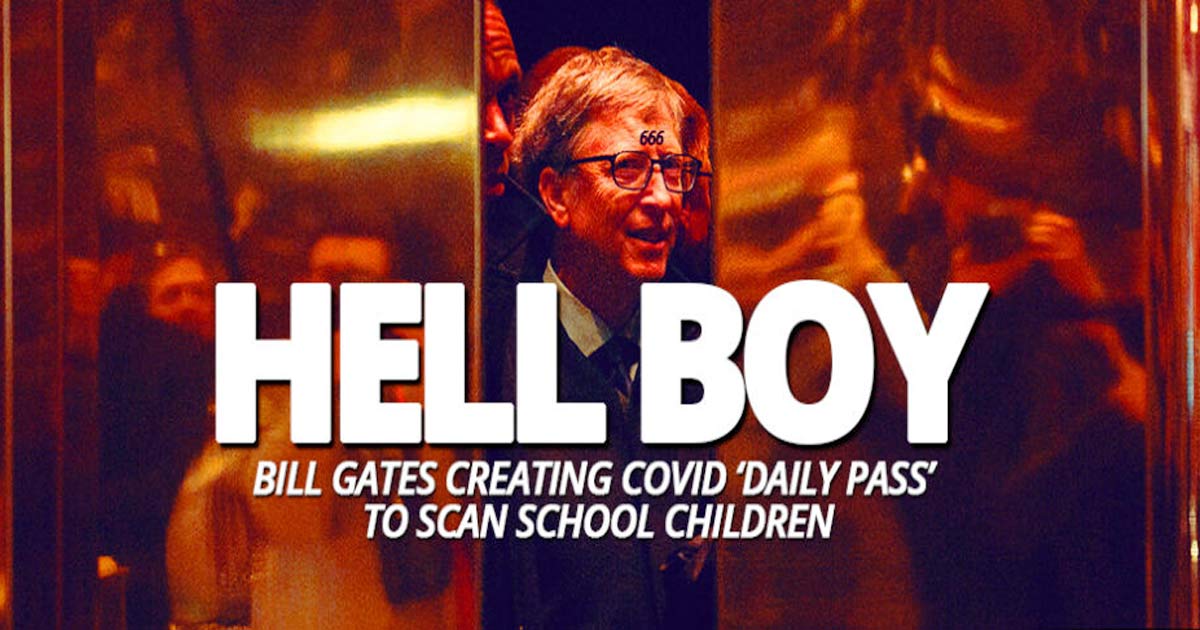 It was only 5 weeks ago that Bill Gates was whining about the fact that most of the civilized world views him as evil, someone who is planning to use eugenics to depopulate the world. Gates decried ‘baseless conspiracy theories’ as being behind the reason why so many people think he is an end-times villain. Today we read that Microsoft is right now creating something called ‘Daily Pass’ that will assign a digital QR code to all students in the Los Angeles Unified School District, and deny them access to school if they do not comply with the dystopian COVID-19 checklist.

Mark of the Beast much, Bill?

I hope your eyes are open wide enough to see that this is never, ever going to go away, that COVID vaccine passports and all the rest of the junk that goes with that, are absolutely, 100% here to stay regardless of what the COVID virus does. They are creating the Mark of the Beast system right in front of our very eyes, and instead of pushing back and refusing, the overwhelming, vast majority of our global population is going right along with it.

Watch the video at the bottom of this article to see how terrifying the new Microsoft ‘Daily Pass’ really is. Everything we have ever told you about the end times is all happening right now, and at a rate of speed so fast we can’t even catalog it all. I hope you’re ready for the Rapture because it is right around the corner.

BILL GATES IS MUCH WORSE THAN YOU THINK HE IS, CLICK TO SEE HOW DEEP THE RABBIT HOLE ACTUALLY GOES

FROM THE DAILY WIRE: The system requires children to be scanned into school with their own unique QR code: their “Daily Pass.” If a student doesn’t have their barcode, they cannot get into school. And per the district, students will also still be wearing masks, staying six feet apart from one another, and getting temperature checks outside the school.

There are nearly half a million students in the Los Angeles Unified School District, ranging from kindergarten to 12th grade. To earn their safe-for-school Daily Pass, students and staffers must answer questions online and test negative for the novel coronavirus every week.

“DAILY PASS GENERATES A UNIQUE QR CODE FOR EACH STUDENT AND STAFF MEMBER, AND THAT CODE AUTHORIZES ENTRY TO A SPECIFIC LAUSD LOCATION FOR THAT DAY ONLY — AS LONG AS THE INDIVIDUAL RECEIVES A NEGATIVE TEST RESULT FOR COVID, SHOWS NO SYMPTOMS AND HAS A TEMPERATURE UNDER 100 DEGREES, THE DISTRICT SAID,” NBC LOS ANGELES OUTLINED. “UPON THE INDIVIDUAL’S ARRIVAL TO A CAMPUS, THEIR QR CODE IS SCANNED BY A DISTRICT SCHOOL-SITE LEADER, WHO TAKES THE INDIVIDUAL’S TEMPERATURE.”

There is also a section on the Daily Pass portal that seeks to get students and staffers vaccinated, from most at-risk to least at-risk.  You can schedule your child’s vaccination via the portal.

Schools have not been shown to significantly spread the virus, and some studies have found children are not at significant risk of contracting the disease. Still, the promotional video for Daily Pass paints a different picture (see below). A scared child is only put at ease when she fills out her Daily Pass information, gets her unique barcode, stays six-feet away from her peers, and is scanned into school.

“MOM, I’M SCARED ABOUT GOING BACK TO SCHOOL,” THE CHILD SAYS IN THE VIDEO. “I DON’T WANNA GET SICK, AND I DON’T WANNA GET YOU AND DAD SICK.” AFTER SHE’S SCANNED INTO SCHOOL, THE GIRL TELLS HER FATHER, “DAD, I HAVE TO ADMIT, I WAS SCARED AT FIRST, BUT THEN I FELT SO SAFE. IT WAS SO GOOD TO BE BACK. THANKS FOR KEEPING ME SAFE. I LOVE YOU SO MUCH.”

Last July, Center for Disease Control and Prevention (CDC) Director Robert Redfield advocated the return of students to school, highlighting the low coronavirus risk for children without preexisting conditions and the unfortunate spike in suicides and drug overdoses as schools remained closed.

“It’s not a risk of school openings versus public health. It’s public health versus public health,” asserted Redfield. “I’m of the point of view and I weigh that equation as an individual that has 11 grandchildren that the greater risk is actually to the nation to keep these schools closed,” he added. Still, schools across the country remain shut out from in-person learning.

Microsoft was founded by billionaire Bill Gates, who’s become a media favorite as he weighs in on all things related to the coronavirus, from masks to vaccines to the Covid-19 relief bill. The left-wing climate activist and philanthropist stepped down from Microsoft’s board in March of last year, but he still remains one of the largest shareholders in the company with roughly 1.3 percent of the company’s shares — estimated worth $16 billion.

According to a statement released by the billionaire last March, Gates intended to “remain active at the company and would work closely with Satya Nadella, Microsoft’s chief executive.”

“Microsoft will always be an important part of my life’s work and I will continue to be engaged with Satya and the technical leadership to help shape the vision and achieve the company’s ambitious goals. I feel more optimistic than ever about the progress the company is making,” wrote Gates. READ MORE