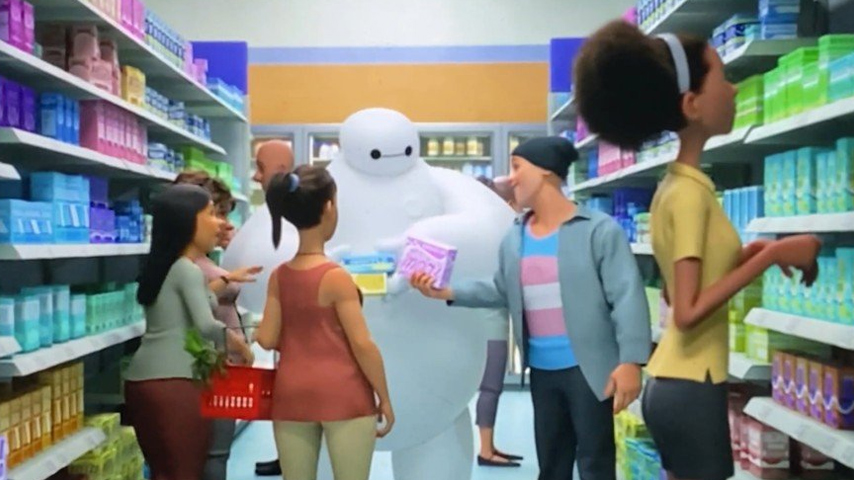 Journalist and Filmmaker Chris Rufo have obtained footage from a popular kid show produced by Disney that contains a scene in which the transgender agenda is being pushed on kids as normal.

The footage comes from Disney’s upcoming show “Baymax,” which promotes the transgender flag and the idea that men can have periods too. The show will air on Disney’s streaming platform, Disney+.

In the clip, the androgynous type character is seen looking for tampons in the women’s hygiene aisle in a store. He asks a woman which of the period products she recommends. Instantly the store’s patrons began inserting their opinions.

EXCLUSIVE: I've obtained leaked video from Disney's upcoming show "Baymax," which promotes the transgender flag and the idea that men can have periods to children as young as two years old.

It's all part of Disney's plan to re-engineer the discourse around kids and sexuality. pic.twitter.com/y1ATnKCEce

This is just one example of the LGBTQ and Transgender agenda that has begun to infect the once family-centered entertainment company.

Disney has come under fire throughout much of 2022 after its CEO Bob Chapek, spoke up to oppose Florida’s Parental Rights in Education Bill, HB1557. Opponents to the bill dubbed it the “Don’t Say Gay” bill. The measure prohibits sexual education in schools for children between the ages of 5-8.

Disney doubled down on its efforts to push the extremist agenda of the LGBTQ community, specifically the opinions of the transgender community.

Disney executives organized an all-hands meeting called the “Reimagine Tomorrow Conversation Series” and pledged to mobilize the entire corporation in service of the “LGBTQIA+ community.”

Executives recruited the company’s most intersectional employees, including a “black, queer, and trans person,” a “bi-romantic asexual,” and “the mother [of] one transgender child and one pansexual child,” and announced ambitious new initiatives.

During the meeting, Karey Burke, president of Disney’s General Entertainment Content, said that her son sent her a text saying, “Gen-Z is 30-40 percent queerer than other generations, Mom, so Disney better get with it.”

NEW: Disney corporate president Karey Burke, the "mother of two queer children," says the company has been "targeting Gen Z and millennials" with LGBTQIA+ "inclusion" content. Her son told her that "Gen Z is 30-40% queerer" and that Disney "better get with it." pic.twitter.com/CYYD7NqKZg

During the forum’s Zoom meeting, details were shared about the directives and content development by the company on its television network Freeform.

“It was very much in the brand ethos of Freeform to be the tip of the spear when it comes to inclusion,” she said. “And we jumped up and down; we celebrated that, nobody stopped us, and it felt great. In part, I think, nobody stopped us because we were targeting Gen-Z and Millennials.”

“We were targeting a younger, I think, more open-minded generation,” Burke continued as she referred to her son’s text message stating: “Gen-Z is 30-40% queerer than other generations.”

Executive producer Latoya Raveneau laid out Disney’s ideology in blunt terms during the meeting. She said her team was implementing a “not-at-all-secret gay agenda” and regularly “adding queerness” to children’s programming. Another speaker, production coordinator Allen Martsch, said his team has created a “tracker” to ensure that they are producing enough “canonical trans characters, canonical asexual characters, [and] canonical bisexual characters.”

Burke said she supported having “many, many, many LGBTQIA characters in our stories” and reaffirmed the company’s pledge to make at least 50% of its on-screen characters sexual and racial minorities.