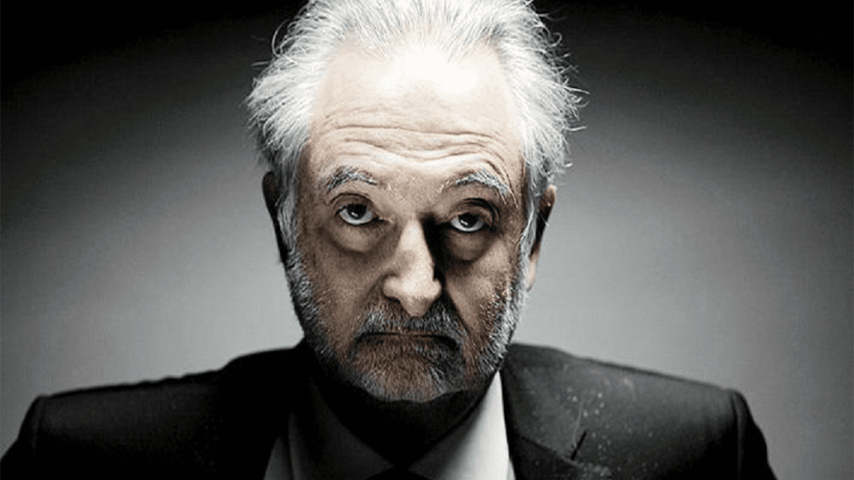 If you have never heard of Jacques Attali, that might be intentional. Among the globalist architects, he is a shadowy figure who not only influences the course of French politics but also shapes our future – globally. Is Jacques Attali merely a spokesman presenting the plans for powerful globalist networks, or could he be the real mastermind behind moving us all toward a Great Reset?

Who is Jacques Attali

Jacques Attali was born November 1, 1943, in French Algeria. His father, Simon Attali, achieved success in perfumery with his shop “Bib et Bab” in Algiers. But, as the story goes, two years after the beginning of the Algerian Independence War (1954-1962), Simon Attali decided to move to Paris with his family.

Jacques Attali studied at the Ivy League of French universities, receiving his Ph.D. in economics from the University Paris Dauphine in 1972. His political career started during his tenure as a Professor of Economics at the same university. He is best known for being a special advisor & counselor to left-wing French President François Mitterrand from 1981-1991, but Attali also directed Mitterrand’s political campaign for the presidential election in 1974.

For over 45 years, Jacques Attali has been present in the political landscape in France. He has written over 40 books, some of which could be described as visions of colorful utopias and others as prophetic. Attali also co-founded EUREKA, a European inter-governmental program for new technologies, which developed, among other things, the MP3.

He is currently the Founder, Chairman, and President of Positive Planet, a globalist organization that contributes to the United Nations’ 2030 globalist agenda. As reported previously at RIAR Foundation USA, “their Agenda is nothing less than global government tyranny that enslaves all humanity while calling the scheme ‘sustainable development’ and ‘equality.’” As the World Economic Forum states, by 2030, “You’ll own nothing, and you’ll be happy.”

In the following video translated by RAIR, French writer Paul-Étienne Pierrecourt examines some of Jacques Attali’s writings and his stunning predictions that apply to world events of the last few years.

In his book the “21st Century Dictionary,” published in 1998, Jacques Attali describes a future pandemic to establish a world police force that eventually becomes a planetary power. He highlights specific terms, including the word “Epidemic.” In addition, Attali states, “we will take planetary measures of containment, which will briefly question nomadism and democracy.”

Other terms described by Attali include “Genetic Therapy,” “Gene Therapy with Nanotechnologies” and, “Panic,”

The engine of markets and democracy The panic, the sheep-like process by which each imitates the other for fear of being marginalized and left behind, is not a malfunction of Western civilization but its very essence.

The “Prevention” section is fascinating:

The first risk against which we will continue to want to protect ourselves is disease. The prevention will invade our entire existence.

In the Republic section, he addresses a future of borderless nations, stating, “Above all, what remains especially important is to invent a republic without territory, without walls. Diasporic.” Attali then pivots to “Income,” which he predicts “Universal Income” and working from home via “telecommuting”:

Every person will perhaps one day have the right to a decent income paid by the state independent of any activity: The Universal Income….More than half of all workers will no longer be employed…Working from home via telecommuting (home office) will account for half of all jobs.

The Man Behind France’s Presidents

Jacques Attali has been well received at the Elysee Palace for over four decades. He is one of the most influential advisers of generations of left-wing French presidents from Francois Mitterrand to François Hollande. He even claims to have “invented” France’s current president, Emmanual Macron.

Macron encountered Attali after graduating in 2004 from ENA (l’Ecole Nationale d’Administration), one of the country’s most prestigious grandes écoles and a breeding ground for future French presidents.

Attali would play a critical role in opening a new chapter in Macron’s life, earning him wealth and increasing his grasp of the global financial system.

Armed with a recommendation by Attali, Macron joined Rothschild & CIE Banque, an investment bank owned by Rothschild & Co. The young Macron rose rapidly up the bank’s ranks to become a managing partner — and a millionaire in the process. 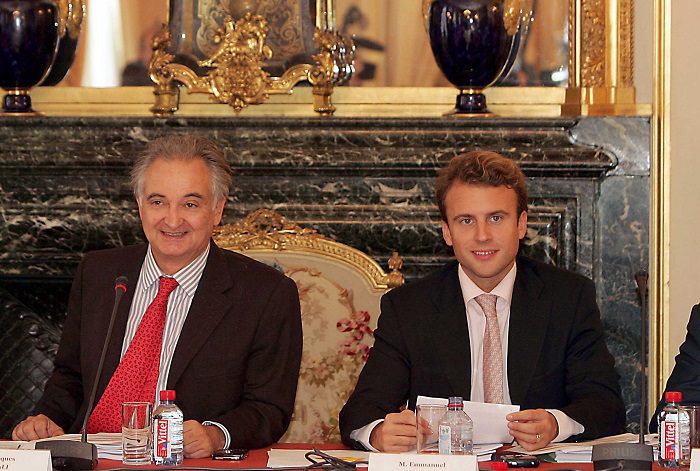 The following photo states, “Emmanuel Macron? I’m the one who spotted him. I even invented it. Totally. Jacques Attali quoted by Anne Fulda’s book titled, “Emmanuel Macron, A Young Man, So Perfect” (2017).” 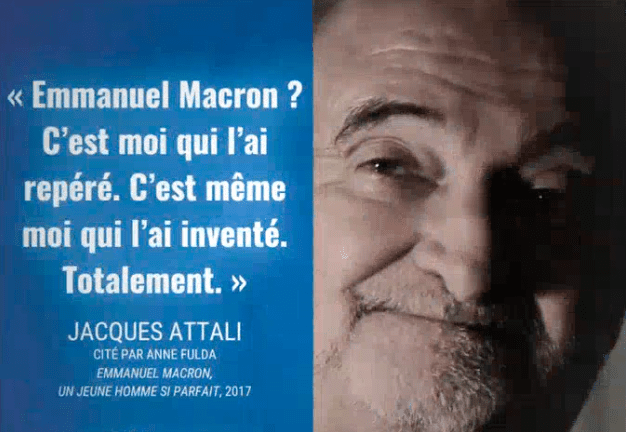 On the cover of French magazine, Liberation, it states, “Attali, the other President.” 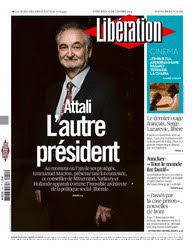 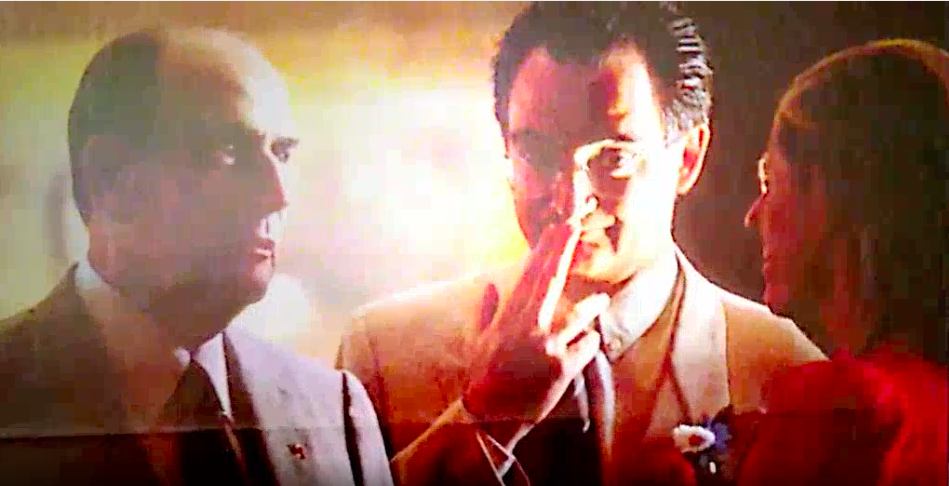 Jacques Attali and the Former President of France Francois Mitterrand 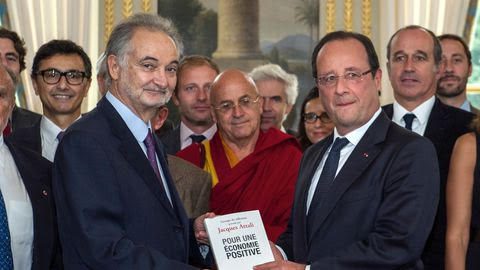 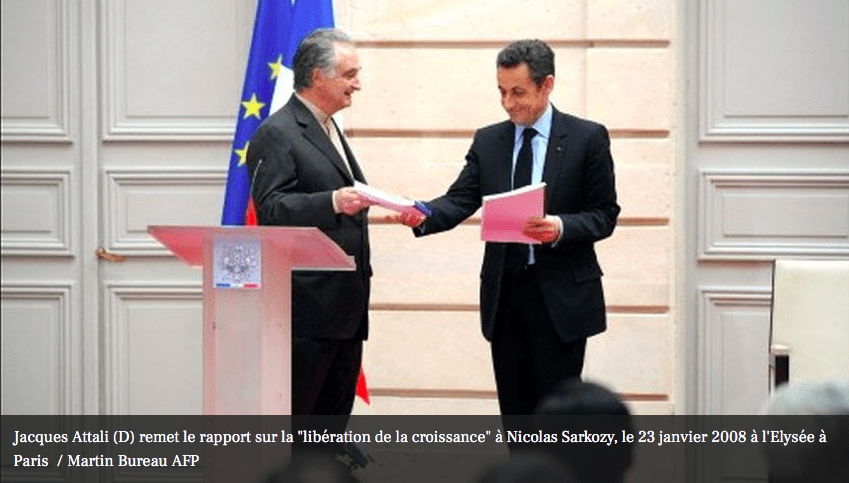 Attali, a regular on political talkshow in France, predicted in 2014 that World War III would start with Ukraine. The video ends with former French President Nicolas Sarkozy warns, “we will proceed together toward a new world order, and nobody, and I do mean nobody, will be able to oppose it.”

Like his globalist counterpart, World Economic Forum leader Klaus Schwab, Jacques Attali is the lesser-known architect shaping the future. However, on December 6, 2020, Archbishop Vigano points to Attali as the origin of Schwab’s “Great Reset.” Archbishop Vigano wrote the following:

On November 19, 2020, the founder of the WEF, Klaus Schwab, declared that ‘Covid is an opportunity for a global reset.’ In reality, Schwab was slavishly repeating what Jacques Attali said in the French weekly L’Express on May 3, 2009.

In May of 2009, a year before the Rockefeller Foundation’s “LOCKSTEP” scenario, Attali published an essay, “Change, as a Precaution,” in which he expressed the hope that the pandemic (Bird Flu) would trigger “Restructuring Fears.” By this, Attali means the kind of fear that would trigger a “restructuring of society.” Attali wrote: “History teaches us that humanity only evolves significantly when it is truly afraid.” 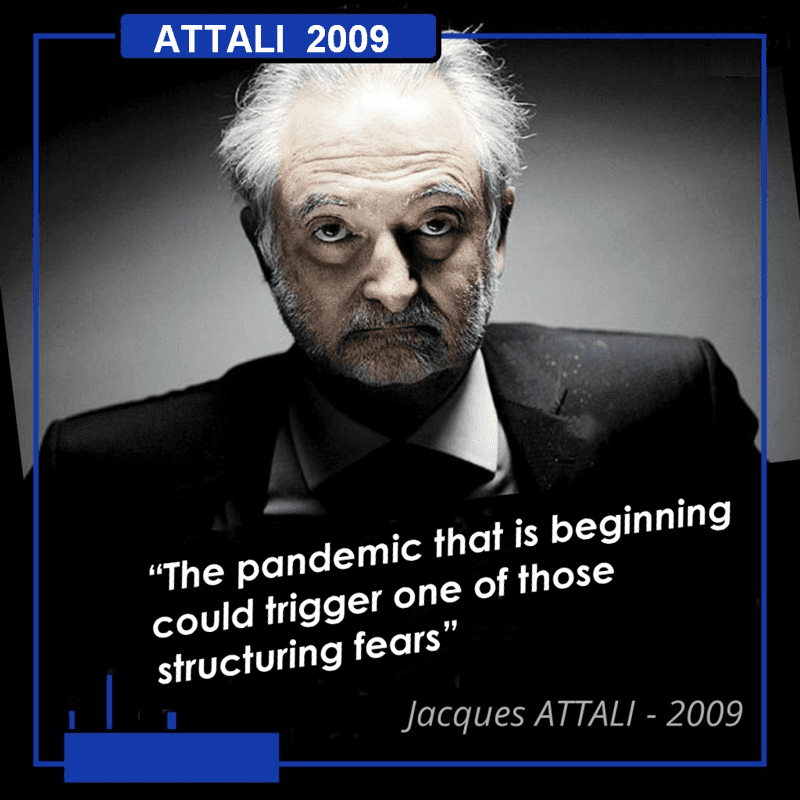 Jacques Attali is also well known for a famous misattributed quote, suggesting reducing the population by a planned pandemic and providing a deadly ” treatment. ” This misquotation is often cited with two different sources, Attali’s memoir, “Verbatim” and/or  “L’Avenir de la Vie” (The Future of LIfe), an interview book by Michel Salomon.

During his interview with Salomon, Attali was asked if it would be “possible and desirable to live 120 years?” After his lengthy answer, he suggested that euthanasia may be a tool for future societies. However, he said he did not advocate killing the elderly but spoke out against an infinite lengthening of life.

Weapons of the Future

Attali’s best-selling book from 2011, “A Brief History of The Future: a brave and controversial look at the twenty-first century” was called “brilliant and provocative…difficult to dismiss” by dangerous globalist Henry Kissinger. In a chapter titled “The Weapons of Hyperconflict,” Attali’s predictions summarize the World Economic Forum’s goals to reshape humanity and gain complete control over every aspect of our lives.

In fact, these future weapons will essentially be founded on the concept of surveillance. Armies will at once develop digital infrastructures of nomadic ubiquity, surveillance systems for suspect movements, the means of protecting strategic installations, and a network of economic intelligence. Robots (concealed in enemy territory) and drones (flying robots) will relay data, detect chemical or biological agents, and serve as scouts ahead of infantry detachments faced with mined areas or blind spots. Software simulating battle will be permanently updated as close as possible to the battlefields.

Furthermore, new combat units will be integrated with the means of simulation, surveillance, and striking. New networks and instruments of nomadic ubiquity will allow combatants to stay connected and simulate every kind of situation. Intelligent clothing will serve to manufacture new uniforms; new materials will make it possible to design new shields. Three-dimensional simulation technologies will help prepare and carry out combat missions, while robots will work as substitutes for real fighters.

Electronic systems (e-bombs) will be able to destroy communications grids and leave an opposing force blind and deaf.

Marines will play a new part in the fight against trackers, in emigration surveillance, and in the protection of strategic straits. Fighter aircraft will no longer be as useful as today, and will lose their influence over staff thinking and military budgets.

[…] By 2040 or 2050, a total of more than fifteen countries will openly possess nuclear weapons and the means to deliver them.

Shortage of oil will also impel the most diverse countries toward the production of civil nuclear power stations. This will lead them to use recycled wastes, known as MOX, for fuel — further multiplying the risks of proliferation and also of “disappearance” of wastes (during the transfer of these radioactive materials). Such wastes could then be used to manufacture radiological weapons mingling nuclear wastes and conventional explosives.

Other weapons — chemical, biological, bacteriological, electronic, and nanotechnological — will then appear. As with the new civil technologies they will prefigure, scientists will strive to increase their power, their miniaturization, and their accuracy. Chemical arms will be capable of seeking out and killing leaders without being detected; pandemics could be ready for unleashing at will; complex genetic arms may one day be directed specifically against certain ethnic groups.

Nanorobots as small as a mote of dust, known as gray jelly, could carry out stealth surveillance missions and attack the cells of enemy bodies. Then, once animal cloning techniques have progressed, cloned animals could well carry out missions — living animal bombs, monsters out of nightmare.

These weapons will not be developed solely in the military laboratories of powerful countries but also by big businesses, “circus businesses,” which will find new markets for them. As always, armaments will remain at the heart of the industrial apparatus, and until super-empire is here, public markets will be essentially oriented toward the armaments sector. Big insurance firms and mercenary companies will then pick up the torch.

Most of these weapons will be accessible to small nations, to nonstates, to corsairs, to pirates, mercenaries, maquisards, mafias, terrorists, and every kind of tracker. In the not distant future, for example, it will be possible to make an e-bomb for $400 from a condenser, a reel of copper wire, and an explosive. Chemical, radiological, and biological weapons will thus be affordable to everyone. Killing more and more people with rudimentary means will become a sad possibility. In cities and on mass transport, crowding will multiply the effectiveness of the most primitive weapons.

Finally (and perhaps especially), since no war can be won unless the peoples waging it believe it just and necessary, and unless the loyalty of citizens and their belief in its values are maintained, the chief weapons of the future will be the instruments of propaganda, communication, and intimidation.”

Among the network of Globalists, Jacques Attali plays the role of a prophet. In a video from 2015 at Louvre and the Theatre Antique in Arles, Attali gave over an hour-long lecture on his book, accompanied by film extracts and musical performances. Then, he takes the stage in a grand antique theatre, dressed in white; he explains his future predictions.

Attali is the spokesman and salesman for these powerful globalist networks, and his role is to reveal what is already planned. He provides further evidence of this powerful network in an editorial written in the Express Magazine in May 1998 titled “The Triangle of Power.” He explains:

Three entities in a modern civil society share the bulk of the power: the political, the media, and judicial. The balance of these three powers will lead the people to reject them as a whole. However, one should be aware that their destinies are intertwined.  Politicians, journalists, and magistrates have had the same education; they share the same values, they come from the same social circles. Nevertheless, they are a minority in the population. They will save themselves or perish together.” 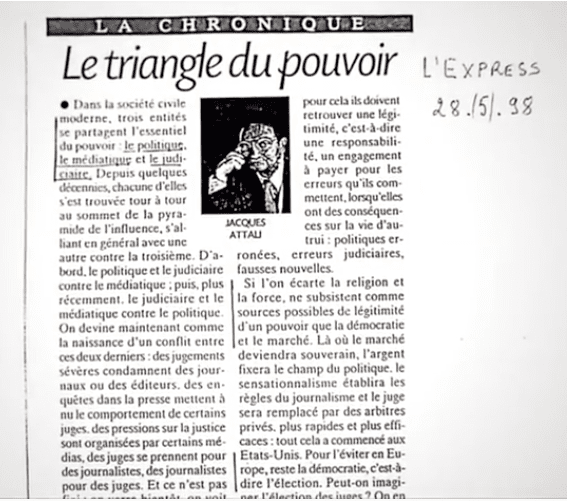 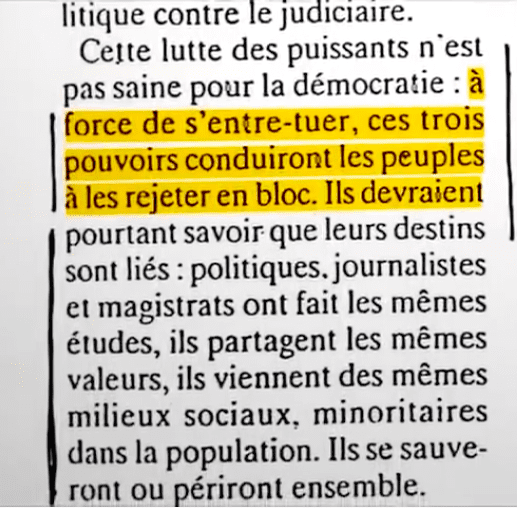 Once again, Jacques Attali proves his precognitive abilities. In 2022, a large portion of the population is rejecting the “Triangle of Power,” but you can be sure this minority already has a plan in place. Like Mr. Attali said: “They will save themselves or perish together.”