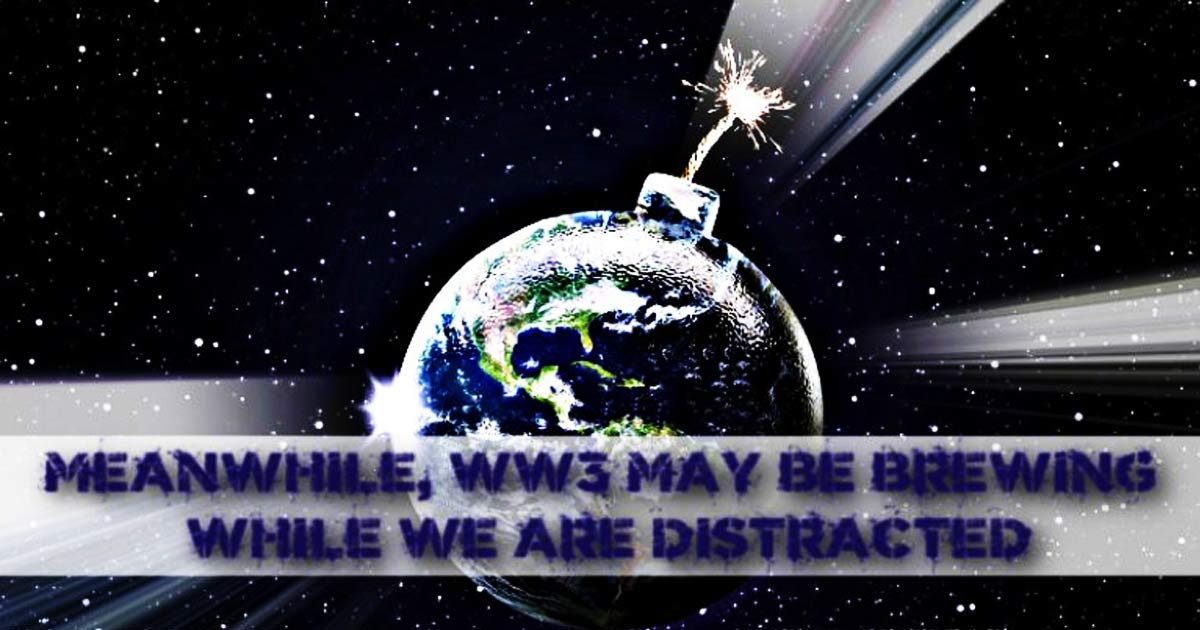 Those who are paying close attention to the pandemic may have missed that another potential killer is brewing across the ocean. In Syria today, there is the real and looming threat of a third world war. Not only is Syria fighting Western-backed terrorists on its territory, there are many more players involved on Syrian soil – from the Russians and Iranians to the Americans, Turks, and Israelis and, with the recent Turkish actions, all of those players could very well come to blows.

It’s well-known to geopolitical scholars that the world is already in global conflict. With the United States, NATO, Israel, EU, and the Gulf States loosely united against the “multi-polar” world of Russia, China, Iran and a growing host of “target” nations that prefer the carrot over the stick, the globe is already in a quiet world war, though the major powers have yet to publicly declare it on one another. As it stands currently, the global conflict is more akin to the Cold War where color revolutions and proxy wars are the order of the day. However, the quiet war can only remain quiet for so long, until one side begins to see that it is the inevitable loser. Then the quiet war becomes loud.

When the Western powers initiated the war against Syria in 2011, it was largely expected and intended to go the way of the Libyan disaster that just ended. However, with the unity of Syrian culture, Syrian government leadership and, most importantly, Russia entering into the war on the side of the Syrian government, the quick destruction of the Syrian state has resulted in a nine year war that has seen Syria turn the tide on the largest and most effective military state in the world.

But while Syria has been defeating Western backed terrorists on its own territory, there are a number of players now involved in the country that could very well find themselves in direct confrontation with one another, leading their proxy forces into a larger much more destructive and global war.

After having dispatched troops to the terrorist haven of Idlib, Syria as the Syrian military engaged in a massive push to liberate the region. Turkey has since come to the rescue of the embattled terrorists, launching drone attacks, airstrikes, and ground forces into Syrian territory.

Turkey established a number of “observation points,” that the Syrian military, during the process of liberation early on in the Battle of Idlib, surrounded. The Syrian military did not disturb these posts or harm any Turkish soldiers.

Syria managed to shoot down a number of Turkish drones but other airstrikes have since avoided hits from the Syrian air defenses.

Israel has also stepped up its attacks on Syria, claiming to be targeting “Iranian” assets but really attacking forces assisting Syria in the fight against terrorism. In fact, Israel recently announced that it has a plan to remove Iran from Syria in the next 12 months.

Moscow and Ankara have since agreed upon yet another “ceasefire” agreement in order to stop the erratic and possibly insane Erdogan from pushing forward any further inside Syria and resulting in a full-on direct war between the two. That ceasefire, however, even as I write this article is quickly unraveling as a number of the groups that are a party to it have yet to stop shelling and launching attacks upon the Syrian army and the latter cannot simply sit by while being fired upon by Turkey’s “rebels” nor can it continue to abide attacks by terrorist groups not even included in the ceasefire but who are continually launching attacks as against the SAA as well.

So we now have yet another situation in Syria that could result in a third world war, potentially moving all the way toward a nuclear confrontation between Russia and the United States. This time, there are a number of possibilities that could see the spread of conflict.

Turkey vs Syria – With the Turkish invasion of Syria it stands to reason that both parties will see direct clashes. However, both of these nations have powerful allies and backers – Turkey has the United States, Israel, and NATO (of which it is a member) while Syria has Russia and Iran. While the threat of a Turkish-Syrian clash may be contained in and of itself, any attempt by Syria to defend itself against Turkey, particularly if that response is taken on Turkish territory, could then trigger the “mutual defense” pact of all NATO states, something Turkey has repeatedly attempted to implement. A full NATO response would then see NATO forces facing Russian forces in Syria, at least at first.

Israel vs. Syria – Ever since 2011 when the crisis in Syria began, Israel has not only been supporting terrorists via intelligence, weaponry, and medical treatment, but it has also acted as another wing of al-Qaeda’s air force, routinely bombing Syrian government forces and installations. Over the past few years, Israel has stepped up its attacks until strikes against Iranian, Hezbollah, and Syrian (often whatever target Israel chooses labeled as “Iranian”) are an almost weekly occurrence. Israel, whatever its claims may be, is already at war with Syria. Should there be a Syrian response, however, it is likely that the one-sided US-Israel relationship that allows Israel to fight to the last American will be triggered, bringing in US forces en masse, putting them at risk for a direct confrontation with Russia.

US vs Russia – All the possible scenarios (and there are many more than the two mentioned above, focus around the possibility of American and Russian troops clashing and thus resulting in a wider, third world war. While both Trump and Putin have proven to have cooler heads than many may at first suspect, there are nonetheless instances of brinkmanship that could very well have resulted in a crossing over the line.

In the past several months, Syrian soldiers have turned back illegal American patrols and refused to allow them to pass through Syrian military checkpoints. In response, US forces have turned back Russian patrols and Russians have done likewise. The situations have become increasingly tense, with some unconfirmed reports of a fist-fight breaking out between American and Russian forces. Ironically, this is the first direct clash of the two world powers if the reports are true.

The checkpoint tensions reached a tipping point when the US attempted to pass through a Syrian village and were met with Syrian protesters and rock throwers. American troops responded with gunfire resulting in the death of a Syrian teenager but also in the village engaging the troops in battle. Russian forces quickly intervened to end the fight.

Thus, the world is yet again held hostage to the possibility of global conflagration as a result of Western aims in Syria and an agenda that is attempting to march forward despite credible and capable opposition.

These clashes and potential clashes come in the context now of a global pandemic that is being used to justify the shutdown of entire nations and the world economy. There is, of course, precedent when it comes to world war and pandemic.

For instance, the 1918 Spanish Flu that killed millions of people worldwide came on the heels of World War 1 which left many places in the world ravaged with destruction, famine, and vastly reduced living standards. The high use of chemical weapons, particularly those which affect the human immune system,[1] also played a part in the virulent spread of the Spanish Flu. Although many theories have been proposed regarding the source of the pandemic (including the possibility that it was created on a military base in Kansas), it is without a doubt the living conditions of the world that provided a fertile ground for its spread and severity.

With this in mind, however, it is important to take a look at the conditions in which we find ourselves in the present day with respect to pandemics or, at the very least, the possibility of pandemics.

The United States and the world finds itself in an economic depression. For some countries, particularly the United States, living standards have been vastly reduced compared to those which previous generations have experienced. While technology may have advanced, the applications of that technology in most areas other than entertainment have been intentionally withheld from general society.

It is also an unfortunate fact that some parts of the world have never had high living standards to lose. Whenever the West catches a cold, Africa catches pneumonia. The Middle East is in the process of being destroyed and Asia remains a pit of slave labor, crowded living conditions, and inadequate infrastructure.

Regardless of what you might think of the COVID-19 hysteria and the responses to it, it is undeniable that the world is in complete turmoil, a situation in which war and disease are always ready to join hands.

NBC Just Simulated A War With China: Here’s What Happened