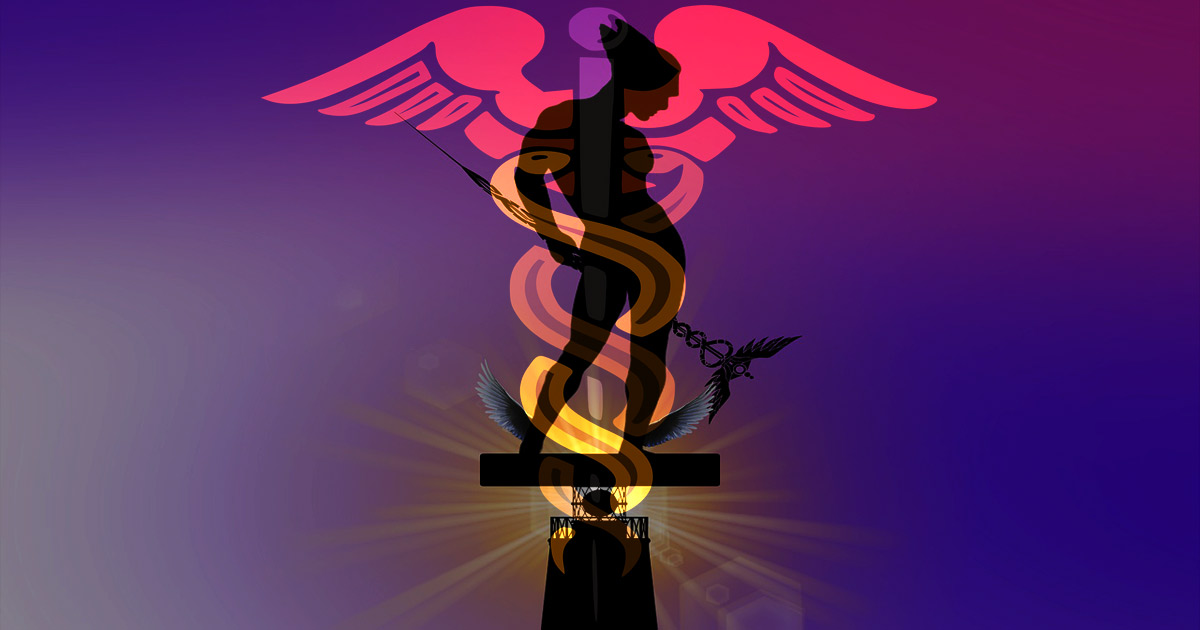 The caduceus is the staff carried by Hermes in Greek mythology and consequently by Hermes Trismegistus in Greco-Egyptian mythology. The same staff was also borne by heralds in general, for example by Iris, the messenger of Hera.

This is the symbol that unifies the Djehuti/Thoth/Hermes/Mercury and is the archetype of SERPENT/SNAKE. In Roman iconography, it was often depicted being carried in the left hand of Mercury, the messenger of the gods, guide of the dead, and protector of merchants, shepherds, gamblers, liars, and thieves.

According to Wiki, As a symbolic object, it represents Hermes (or the Roman Mercury), and by extension trades, occupations, or undertakings associated with the god. In later Antiquity, the caduceus provided the basis for the astrological symbol representing the planet Mercury. Thus, through its use in astrology, alchemy, and astronomy it has come to denote the planet and elemental metal of the same name. It is said the wand would wake the sleeping and send the awake to sleep. If applied to the dying, their death was gentle; if applied to the dead, they returned to life.

Kundalini and the Staff connection

Thoth/Djehuti taught that Kundalini is a dormant potential spiritual energy force in all humans. It is analogized as a coiled snake situated at the root of the spinal column. As one’s consciousness rises the snake uncoils and winds up the spinal column.

Thoth/Djehuti and Mercury are of the same archetype. KUNDALINI matches “MERCURY” in the most salient 41 Gematria value. 58 is the sidereal rotation period of the planet Mercury.

A powerful mystical symbol of Ancient Kemet/Egypt is the Djed Pillar (below). With vertebrae-like features, it represents the spinal cord. DJED PILLAR sums to 179 which is the 41st prime number.

Kundalini energy is said to rise up the spinal chord, then enter the brain where it stimulates the Pineal gland and opens the “third eye” leading to the highest state of consciousness. Some call it “Christ consciousness.”

There are 33 vertebrae. Christ dying at age 33 could be seen as a metaphor. Jesus is said to have been crucified on a hill named GOLGOTHA (from Hebrew Gulgoleth) which means “SKULL”

The brain and the Pineal gland are in the skull.

Rituals like the Kobe “Black Mamba” Bryant death are performed to suppress human consciousness and to symbolically kill the messenger of spiritual knowledge and truth.

The plethora of Mercury rituals that make up the greater ritual are being performed to mitigate the effects of, or outright prevent the Great Awakening that is said to be the essence of the coming Age of Aquarius.