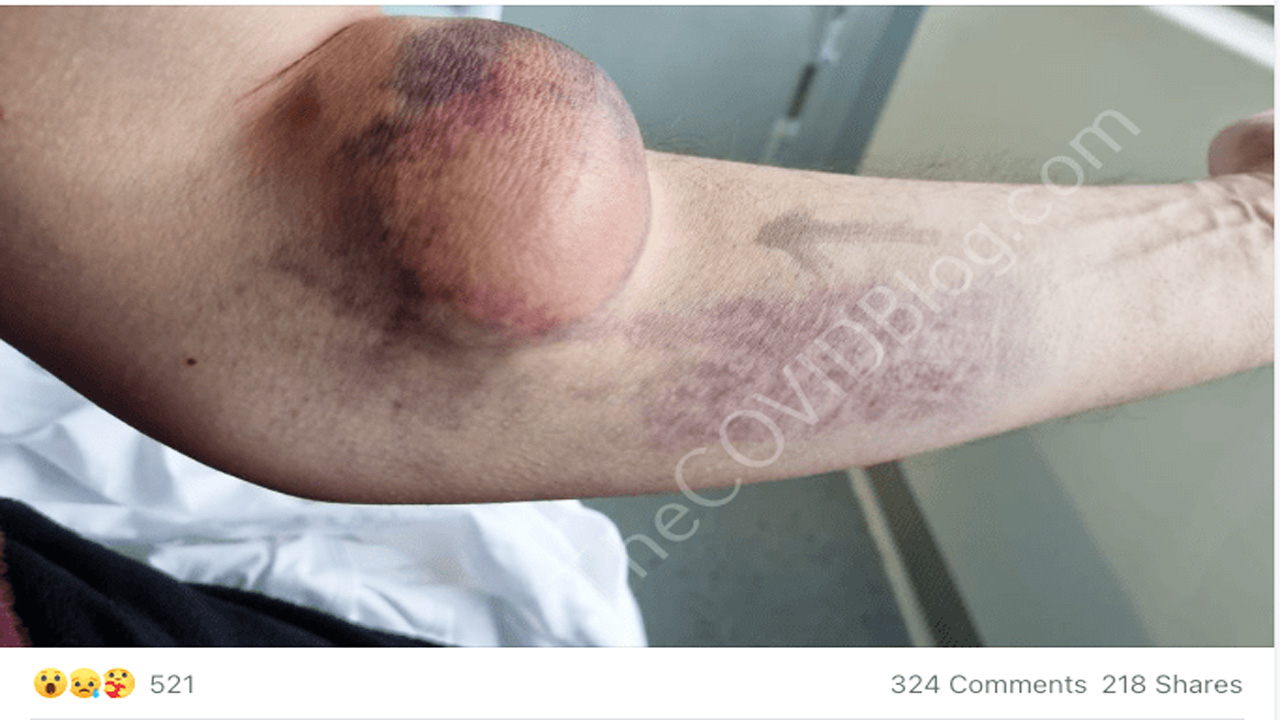 LONDON — Mr. Mark Ruston had faith in the U.K. government and big pharma after being inundated with 24/7 propaganda in early 2021. Now he is warning as many people as possible to protect their health and learn from his mistakes.

Doctors told Mr. Ruston that he was an ideal candidate to be first in line for the AstraZeneca viral vector DNA injections. He had a kidney transplant and was considered a top priority for the shots. The U.K. was the first country to authorize the AstraZeneca injections for emergency use on December 30, 2020. Mr. Brian Pinker, 82, was the first Brit to receive an AstraZeneca shot on January 4, 2021. He, like Mr. Ruston, was prioritized because of kidney issues.

It’s unclear when exactly Mr. Ruston received his injections. But it was “before most people had been offered their first…due to me being vulnerable by having a compromised immune system,” according to his Facebook page. Thus he was likely first in line last January. Further, Mr. Ruston said “I didn’t see anyone for a year” after he received the shots.

Mr. Ruston was skeptical about the injections. After kidney transplants, recipients must take immunosuppressant (aka anti-rejection) drugs. It ensures that the immune system doesn’t attack the new kidney like a virus or some other foreign invader. Doctors, with no data or science backing their assertions, told Mr. Ruston that the viral vector DNA injections are safe and won’t interfere with his kidney regimen. Mr. Ruston said those doctors kept him alive for years, so he had no reason not to trust them. Now he is telling his post-AstraZeneca horror story that’s spanned 13 months and counting.

“My body temperature dropped to a more or less freezing temperature, and I could not get warm for three months,” Mr. Ruston wrote. He wore several layers of clothing and turned the heat up high in his home. But his body simply would not warm itself up. Mr. Ruston reported a “foul-smelling” discharge leaking from his nose for over four months as well. Severe headaches and patchy vision were also reported.

Sometime around July or August, Mr. Ruston checked himself into a hospital because his condition wasn’t improving. A blood clot (deep vein thrombosis – DVT) was discovered in his left leg. He’s extremely lucky, as we’ve covered many stories of post-injection DVT turning into pulmonary embolisms, particularly after AstraZeneca shots. Blood thinners dissolved the clot before any further damage was done. 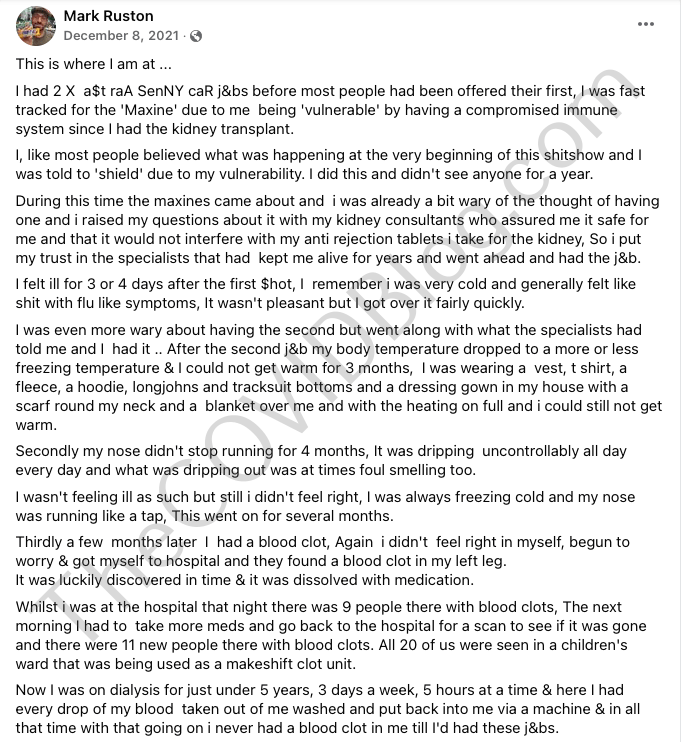 Mr. Ruston received dialysis three days per week for five years due to his failing kidney. Doctors need an easy access point to streamline the process. An arteriovenous (AV) fistula is a surgical procedure that connects an artery and a vein in the wrist or some other access point. Dialysis patients are hooked to the machine via two needles in the fistula – one that removes blood for filtering and another that puts the filtered blood back in the body. 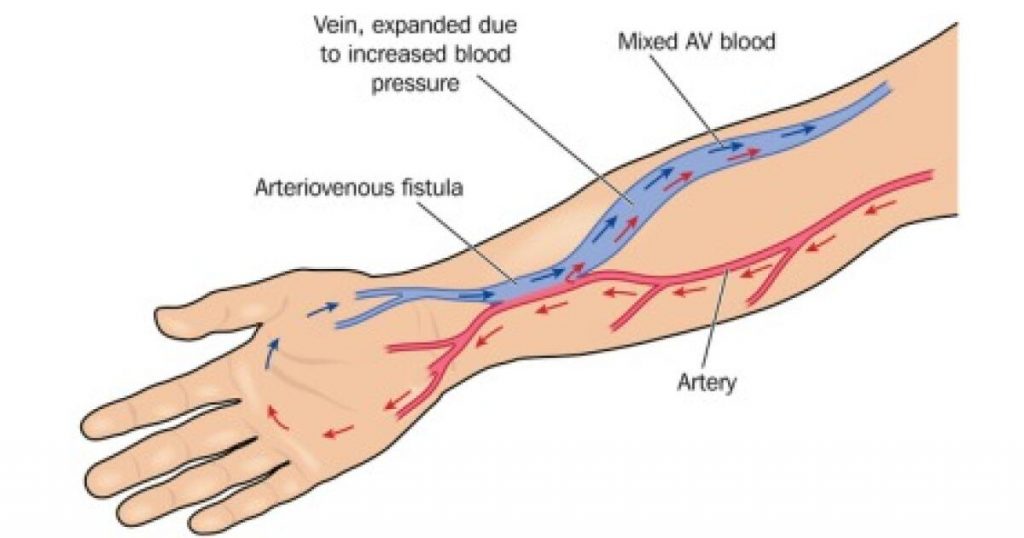 Mr. Ruston said he woke up on Sunday, January 16 screaming in pain. “It felt like razor blades were being repeatedly dragged through my left arm,” he wrote. Unfortunately, it was Sunday, and he could not see his doctor that day. Mr. Ruston called an ambulance Monday morning, January 17. By now, his wrist skin was bruising and swelling. Of course, the first thing doctors did was test him for so-called COVID-19. He tested positive.

Doctors left Mr. Ruston for over 18 hours in a waiting room, despite the gruesome growth on his arm. The condition is known as arteriovenous fistula thrombosis – a blood clot in the dialysis access point. 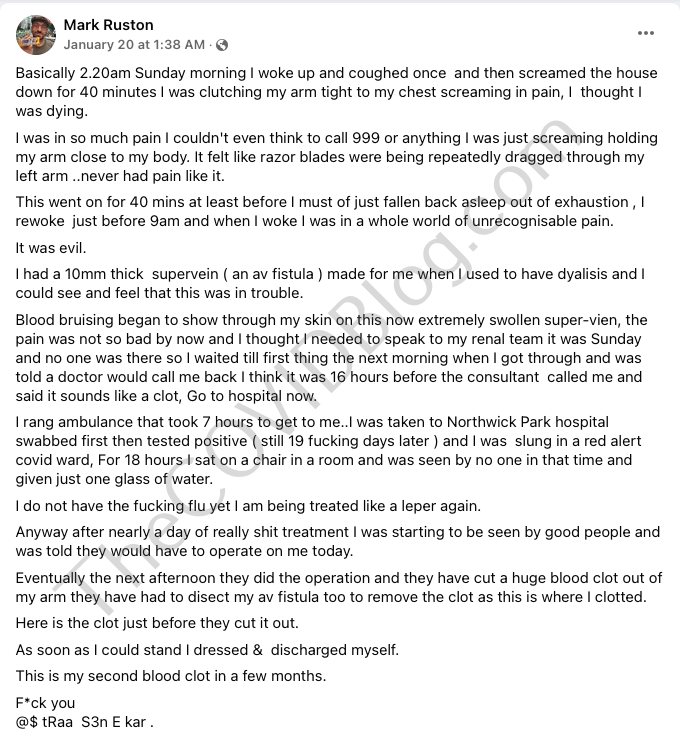 Though it was an obvious emergency, it took until the next afternoon, January 18, for doctors to perform the surgery. Mr. Ruston discharged himself from the hospital once he was stitched up after the procedure.

Mr. Ruston soon noticed that he could no longer fully access his Facebook account. He was given a three-day suspension from the platform for “going against our standards for misinformation.”

Mr. Ruston’s personal account of his injuries is misinformation, according to Facebook.  But that was the least of his worries.

Mr. Ruston was back in the hospital just a few days after the surgery. Doctors discovered four more blood clots in his arms and chest. He spent three days in the hospital with a heparin IV to dissolve the clots. 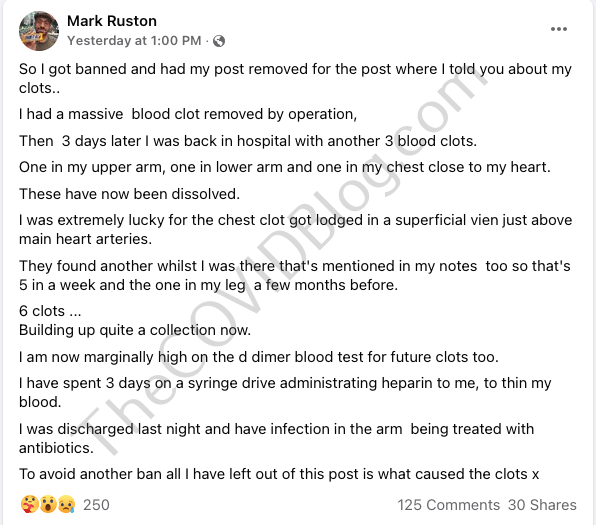 His Facebook account was eventually restored. But now he is careful not to type the words vaccine, AstraZeneca or anything else related to his truth. Mr. Ruston admitted that he fell for the propaganda at the beginning of the so-called pandemic. Now he is dedicated to warning as many people as possible not to make the same mistake.

“I will not let them come near me with any future boosters and jabs. I am bored of the whole fucking thing now and I will not comply with any of it.”

AstraZeneca and Johnson & Johnson have disappeared

From February to June 2021, about half of our stories involved viral vector DNA injections. Those stories were also some of the most disturbing of all. Mrs. Sarah Beuckmann had perhaps the most grisly, post-AstraZeneca skin reaction on this blog. Mr. Richard Terrell had a similar, but less gory post J&J skin reaction. Mr. Benjamin Goodman (32) and Mr. John Francis Foley (21) both died within 24 hours after their J&J injections. Ms. Desiree Penrod (25) died a week after her J&J shot. But then the viral vector injury stories stopped, except for the occasional one in Australia or Canada. We’ve covered maybe two J&J stories since June.

Australia is still pushing AstraZeneca. But Aussies are shunning the shots. Canada “donated” millions of AstraZeneca doses to poor countries. The Canadian government tried to make it sound altruistic. But it was because nobody wants them in Canada. J&J and AstraZeneca are mostly being pushed on the poorest countries in the world under the guise of altruism. But everyone knows what’s really happening.

The viral vector DNA injections are super-deadly. The powers-that-be know this and understood that there was no way to hide what was happening. AstraZeneca even changed the name of its injections in hopes of rehabbing its image. But these two companies are likely to concentrate on poor countries in 2022. Evil knows no bounds.