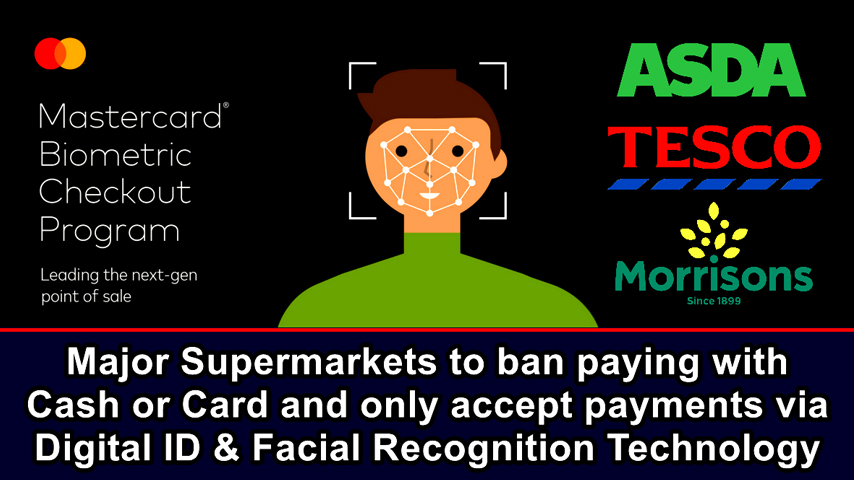 All major supermarkets will very soon no longer accept cash or card payments, and instead, force customers to use their faces or fingerprints to pay for essential items, in what is another huge leap toward a dystopian cashless society.

Mastercard recently launched a program for retailers to offer biometric payment methods, like facial recognition and fingerprint scanning. At the checkout, users will be forced to authenticate their payment by showing their face or the palm of their hand instead of being allowed to pay by a card or with cash.

The program has already gone live in five St Marche grocery stores in Sao Paulo, Brazil, with more trials also planned for Asia and the Middle East. Mastercard says it plans to roll it out globally later this year.

The payments company wants to roll the program out worldwide for small and large retailers. Ajay Bhalla, the president of cyber and intelligence at Mastercard, said: “The way we pay needs to keep pace with the way we live, work and do business, offering choice to consumers with the highest levels of security.

“Our goal with this new program is to make shopping a great experience for consumers and merchants alike, providing the best of both security and convenience.

“All the research that we’ve done has told us that consumers love biometrics”.

Did Mastercard only conduct its market research in China? It certainly sounds like it.

The current spin being used to justify using the biometric payment system and forcing the public to live in a dystopian cashless society is that it will “lead to shorter queues, be more hygienic than tapping in a pin, and be less vulnerable to fraud”.

A spokesman for Mastercard said: “No more fumbling for your phone or hunting for your wallet when you have your hands full – the next generation of in-person payments will only need a quick smile or wave of your hand. The trusted technology that uses your face or fingerprint to unlock your phone can now be used to help consumers speed through the checkout. With Mastercard’s new Biometric Checkout Programme, all you will need is yourself.”

Mastercard cited a study that claims 74% of the global population has a “positive attitude” towards biometrics. That number is highly questionable, but are the 74% aware of the dangers of implementing this kind of technology?

All the systems of Digital ID and data-gathering are vulnerable to security breaches. The Equifax breach, for example, compromised an astonishing 145.5 million Social Security numbers. Because of the potential for cyber breaches, hacks in the future could even larger and put entire systems at risk.

The rise of artificial intelligence also means that, as data from Digital ID systems is gathered, algorithms are being built that may have a major impact on people. These systems, though, like the data itself, are neither transparent in operation nor clear even as to who or what is building them, and for what purposes.

It may be, in the future, that people will find they no longer have consumer options such as low-cost bank loans due to the decisions of algorithms whose workings are not transparent to the public.

The only way to stop the implementation of this Draconian system is to always pay with cash whilst the use of this new technology remains optional.