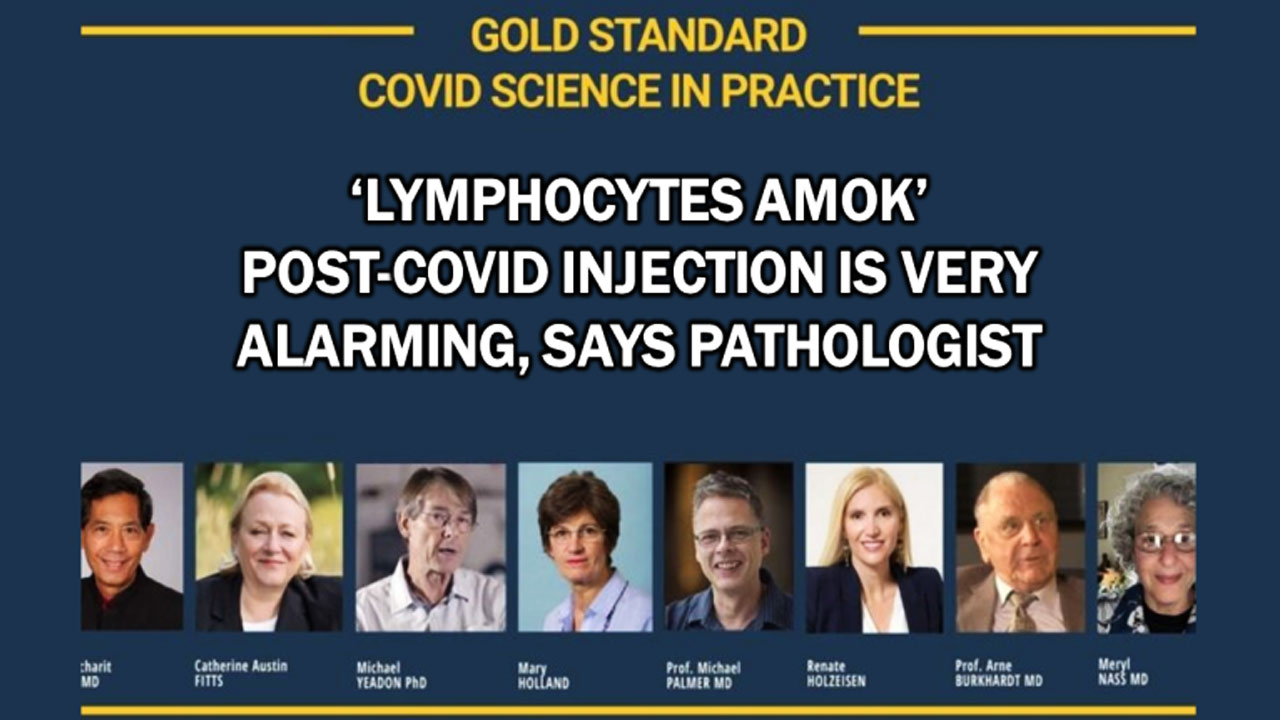 Hosted by UK Column, last Friday Doctors for Covid Ethics (“D4CE”) held their second symposium, “Sounding the Call.” The symposium comprised 15 experts in science, medicine, finance, media, and the law who spoke as they should – freely and honestly.

In September two pathologists, Prof. Arne Burkhardt and Prof. Walter Yang released their findings of an investigation into ten deaths linked to Covid injections. “The lymphocytes are running amok in all organs,” Professor Yang said.  During D4CE’s Symposium II, Prof. Burkhardt revealed the findings on 20 deaths post-injection which confirmed their previous findings.  “This ‘lymphocytic amok’ is a very alarming finding,” Prof. Burchardt said.

Prof. Arne Burkhardt is a German pathologist and researcher. He headed the Institute of Pathology in Reutlingen for 18 years, after which he worked as a practicing pathologist. Prof. Burkhardt has published over 150 articles in journals and has made contributions to handbooks.

He has performed post-mortems on 20 patients aged 28 to 95 years, 7 men and 8 women, whose death occurred between seven days and six months post-Covid injection. The deaths of 9 patients occurred outside the hospital, for example at home or at work, one died in an elderly care home, 8 died in the hospital and for two the place of death is unknown.

The post-mortems found many organ and tissue characteristics related to Covid injections. The most important findings were in the small and larger blood vessels.

Prof. Burkhardt demonstrated the damage caused using images from heart, lung, and brain tissue.  Smaller blood vessels were inflamed, the endothelial cells were desquamated – had shed, peeled, or come off – and there was lymphocytic infiltration.  In larger blood vessels post-mortems also found necrosis – a pattern of cell death that occurs in response to injury.

The lymphocytes infiltrating the tissues that Prof. Burkhart was referring to are T-lymphocytes, killer lymphocytes.  T-cells help to kill cancer cells and control the body’s immune response to foreign substances. They are also responsible for killing the body’s own cells that have been taken over by viruses or have become cancerous.

Prof. Burkhardt’s demonstration is fairly technical and before listening to it we recommend you watch the video below to familiarise yourself with the histology of healthy epithelium and blood vessels.

Endothelin is produced in a wide variety of tissues including endothelial and vascular smooth muscle cells.  It is a potent vasoconstrictor, pro-inflammatory and pro-oxidative agent. Endotheliitis – an immune response within endothelium in blood vessels, in which they become inflamed – is a pathophysiologic process that causes various types of dysfunctions in end organs, including heart, lung, kidney, and brain.

Medial necrosis is a lesion of the aorta in which the middle coat of the artery deteriorates.

Diffuse alveolar damage (“DAD”) is a stereotyped response to injury in lung tissue while alveolitis is a general medical term for a case of acute or chronic lung inflammation.

“The bullets are the lymphocytes – the T-lymphocytes, the killer lymphocytes – that are pervading so many organs that you’ve just got to be horrified … Because this is typical after vaccination it proves that vaccination is the cause,” said Prof. Sucharit Bhakdi, “We now know these vaccines are putting the bullets, and the bullets are from our own immune system … I’m calling on all our colleagues around the world, the doctors, to stop firing these pistols [Covid injections], especially at our children.”

The Symposium II “Sounding the Call” program details, as well as short biographies of the participants, can be found HERE and you can watch the full 4-hour symposium HERE.  Prof. Burkhardt’s presentation begins at 00:22:20.

Dr. Vernon Coleman explains the severe harm the Covid-19 Vaccines do to the Brain

UK: Births in England Collapsed and are NOT Coming Back Up