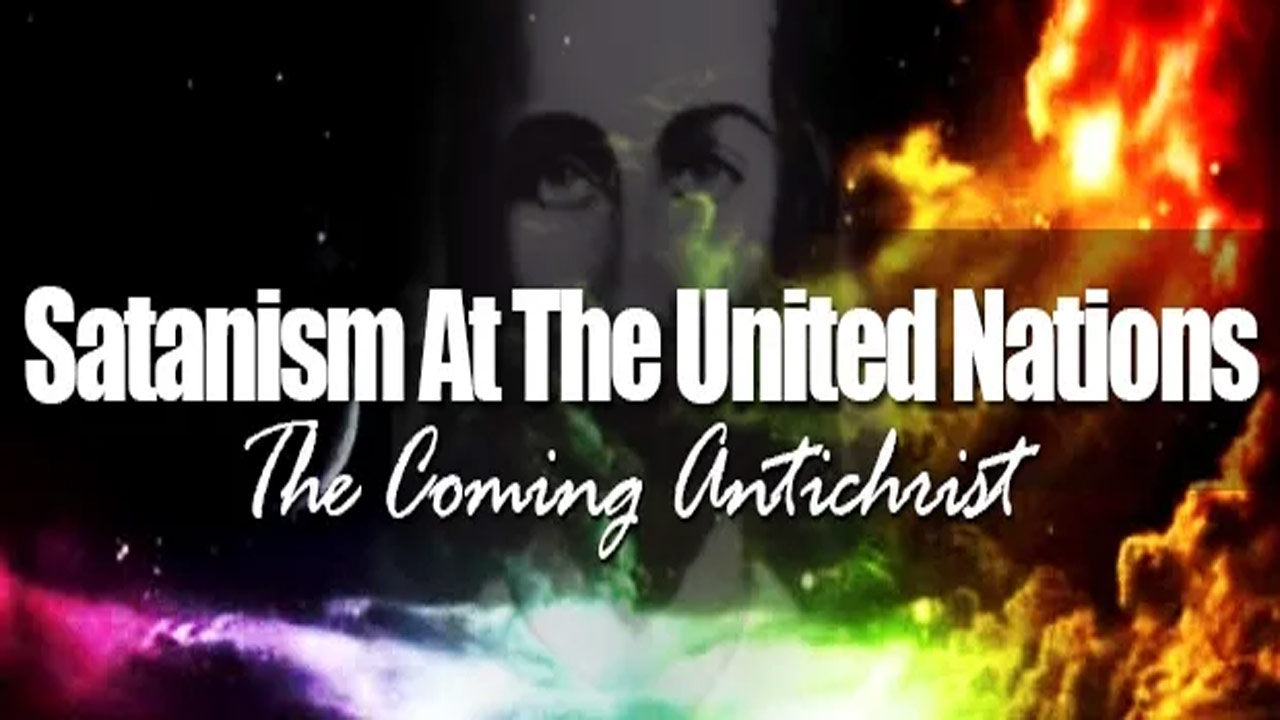 In 1919 Woodrow Wilson won the Nobel peace prize for being the architect of the League Of Nations.

Woodrow Wilson wanted nations to have a diplomatic forum to put an end to the great wars. This League of Nations organization failed, but would later become the basis for the United Nations – and in doing so, unleashed a nefarious, totalitarian, occultist organization upon the world stage, threatening the sovereignty of the very nations that Woodrow Wilson originally wanted to protect.

The UN exerts its will over sovereign nations and seeks to increase control over states while minimizing those states’ power to enforce their laws and regulations to bring about Luciferian worship and taking the jab is only the beginning.

UN blue helmets are accused of human rights violations and bringing cholera to places like Haiti, and there have been no repercussions whatsoever.

United Nations is a rogue organization with zero oversight.

Let us examine an organization called Lucis Trust, circa 1922, the publishing house of the UN.

Their ideologies (based on the Luciferian occultism of Alice Bailey) borrowed from the anti-Christian philosophies of Madame Helena Blavatsky.

Why would the United Nations be inter-connected with the likes of Alice Bailey, a known occultist, who claimed to have communicated with a demonic being named Master Djwhal Khul?

The Luciferian Gnostic Wisdom or Ancient Mysteries now practiced by high-level Freemasons and the plethora of cults and creeds coming under the catchall “New Age” were given to humanity by the Occult Hierarchy (Lucifer being at the very top of the Hierarchy of power.)

Why would the United Nations be inter-connected with the likes of Alice Bailey?

The Baileys (Alice and her husband Foster), or rather, the Hierarchy of demonic beings speaking through the Baileys, confirm that the real purpose of Freemasonry, taught to man by the Hierarchy, is the quickening of the spiritual evolution of humanity and the transformation of man’s nature into a God-like superman. The website is Lucistrust.org.

Before we get into Alice’s 10 step plan for the paganistic takeover, let us acknowledge the major funders of the agenda at hand. The Bill and Melinda Gates Foundation, George Soros, the president of the World Bank, the Rockefeller Foundation, and Thomas Watson of IBM, to name a few.

After the first two or three years, the name was changed to “Lucis Publishing Co.” (The Theosophical Society also used the name “Lucifer” for its early magazine.)

In 1923, with the help of Foster Bailey, Alice Bailey founded the Arcane School, which is part of Lucis Trust. This school provides educational correspondence, meditation instruction, and guided study based on her writings.

(Screenshot documentation of Bill and Melinda Gates, total backers of the Luciferian site and program- ming, although his name with all other funders have since been hidden.)

Now let us go over to the United Nations website https://www.un.org/en/ and look at the most urgent tasks posted right on their main page. You can read them as you like, but I shall interpret them as such:

As you can see, traditional values are quickly being swept away via the United Nations and the Lucis Trust’s (originally Luciferian) global demoralization program. It has been suggested that Christian views are the main opponents of LGBTQ human rights since they believe homosexuality is a sin while disregarding the more severe persecution of gay people in other religions, where gay people are tor- tured and killed.

Leaders of the URI (United Religions Initiative), including Bishop Swing himself, habitually equate evangelism, preaching the Gospel, with conquest and manipulative proselytism. They see orthodox Christians as “fundamentalists” who put “peace” at risk.

In his opening speech to the 1996 URI summit conference, Bishop Swing said, “There is not going to be a time shortly when one religion converts, conquers, subjugates all of the other religions to itself.” He also has said that the “World needs a United Religion.”

What is particularly interesting on the Lucis Trust site is this statement under the Arcane School link, “all disciples preparing for active service to the Hierarchy finds their place within one or other of these seven major areas of human life, through the technique of occult meditation.”

The icing on the cake is sec V1 under CREATING FORM AND THE STRUCTURE OF THE NEW WORLD ORDER. (So much for “NWO conspiracy theory”)

So, there you have it, your new world pagan satanic religion being funded and rolled out by major elitist and geopolitical foundations within our own United Nations, the caretakers of the world.

On a good note, the sheer blatancy of these bold agendas being laid out has exponentially created a worldwide awakening, with forced vaccinations, shutdowns, and the loss of fundamental civil rights in every country via a manufactured pandemic.

The powers that have accumulated so much wealth and power are closer than ever to executing their globalist agenda that they are outright stomping on the rights of civilians all over the world, disregarding the laws set in place for our protection. I can only hope this will be the basis for mass defiance of their “PLAN”.

NOW IS THE TIME TO STAND YOUR GROUND! IT’S NOW OR NEVER!

“Like it or not, everything is changing. The result will be the most beautiful experience in Man’s history or the most heinous enslavement you can imagine. Be active or abdicate.

The future is in your hands.”? Milton William Cooper, Behold a Pale Horse

Can you remember what life was like in late 2018 and before? It’s coming up on 2 years to “flatten the curve” and things are getting much worse. Time to reflect on what has changed and stand your ground! Government works for the people, not the other way around!

Brush up on the U.S. Constitution to see what your rights are….it’s all right there in black and white.

Share your thoughts on United Nations and Luciferian Worship in the comments section below (I’m sure I know what will be said.)

Article by KB for ROTTER News