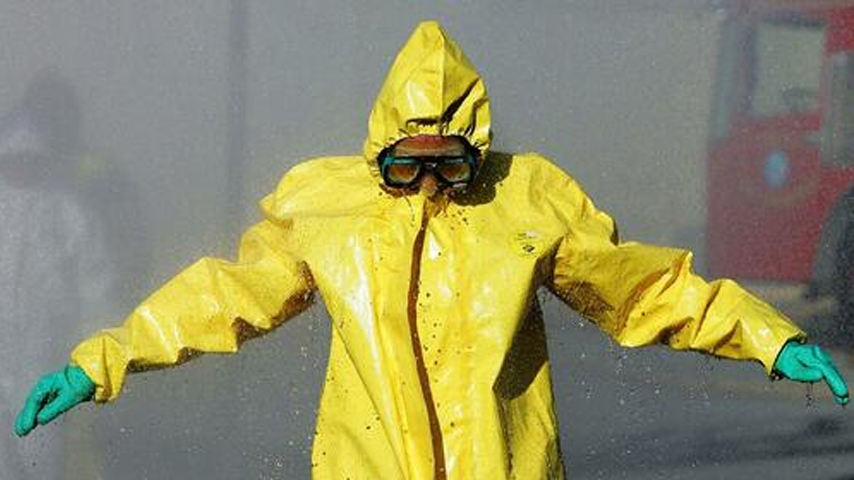 The World Health Organization advised Ukraine to destroy ‘high-threat pathogens’ in the country’s public health laboratories in order to prevent “any potential spills” that might infect the population during the Russian invasion, Reuters reports.

US Undersecretary of State Victoria Nuland acknowledged that Ukraine “has biological research facilities, which, in fact, we are now quite concerned Russian troops, Russian forces may be seeking to gain control of. So we are working with the Ukrainians on how they can prevent any of those research materials from falling into the hands of Russian forces should they approach.”

The dramatic back-and-forth between Victoria Nuland and Marco Rubio the other day—about the US bio-labs dotting Ukraine, and the possibility that “Russian forces may gain control of” them—has Glenn Greenwald and other savvy commentators deeming it a bombshell revelation of the awful truth: i.e., that there are US bio-labs throughout Ukraine, as Russia and China have been saying (so it’s not a “conspiracy theory” after all); and that Russia will now seize them.

That interpretation of the Nuland/Rubio duet casts it as a moment of rare honesty in Washington—she uneasily “confessed” the awful truth about the bio-labs, and he, “stunned” by that surprise “admission,” then asked, fearfully, if this means that any biological attack to come must be Russia’s doing; to which (of course) she said it does.

That’s how Greenwald, and the commentator in the video below, present the moment:

Rubio undoubtedly expected a flat denial by Nuland, thus providing further “proof” that such speculation is dastardly Fake News emanating from the Kremlin, the CCP and QAnon. Instead, Nuland did something completely uncharacteristic for her, for neocons, and for senior U.S. foreign policy officials: for some reason, she told a version of the truth. Her answer visibly stunned Rubio, who — as soon as he realized the damage she was doing to the U.S. messaging campaign by telling the truth — interrupted her and demanded that she instead affirm that if a biological attack were to occur, everyone should be “100% sure” that it was Russia who did it. Grateful for the life raft, Nuland told Rubio he was right.

Since anything is possible, it’s possible that “for some reason,” Nuland “told a version of the truth,” which prompted an astonished Rubio to ask if Russia, then, might now get its gross hands-on whatever awful pathogens are stored in those facilities, and use them against us. That reading of the back-and-forth depicts it as a sort of gotcha moment, wherein Nuland, “for some reason,” spilled the beans.

That’s one way to look at it. The other is this: That back-and-forth was staged, to set us up for the next “pandemic”—this one to be blamed on Russia, just as the last one was on China (only). According to this view, Nuland and Rubio were acting just as you’d expect, she as a neocon fanatic, and ruthless propaganda operative, he as a diehard “ant-communist” (“Russia,” in his mind, being “communist,” just as “Putin,” in his mind, is Stalin). Thus Nuland’s visible ”discomfort” at having to “admit” the presence of those bio-labs was all an act, and so, perhaps, was Rubio’s amazement, as their duet served the dual purpose of (a) laying the groundwork for the next global “virus” panic (hemorrhagic fever, anyone?), and (b) blaming it on Putin/Stalin, so that the Russia-hatred can continue through the next barrage of bio-fascist “measures” (enabling us to tell ourselves that we—like the Ukrainians!—revere democracy, while Russia is totalitarian, though the “democracies” today are looking, and behaving, more and more like Nazi Germany).

Now, one might counter-argue that Nuland surely let the cat out of the bag—that her acknowledgment of all those bio-labs (built on Obama’s watch) was an embarrassment for the US, and grounds for Serious Investigation of the US biowarfare policy in months to come. While all that may be true (my mind is open on the subject), I really don’t believe the US government is any longer capable of being embarrassed; nor is it likely, in my view, that Congress or the media will ever seek to bring the US biowarfare criminals to justice, as long as they can keep on blaming Russia for whatever happens next. (If they’re so keen to bring such criminals to justice, why is Dr. Fauci still at large?)