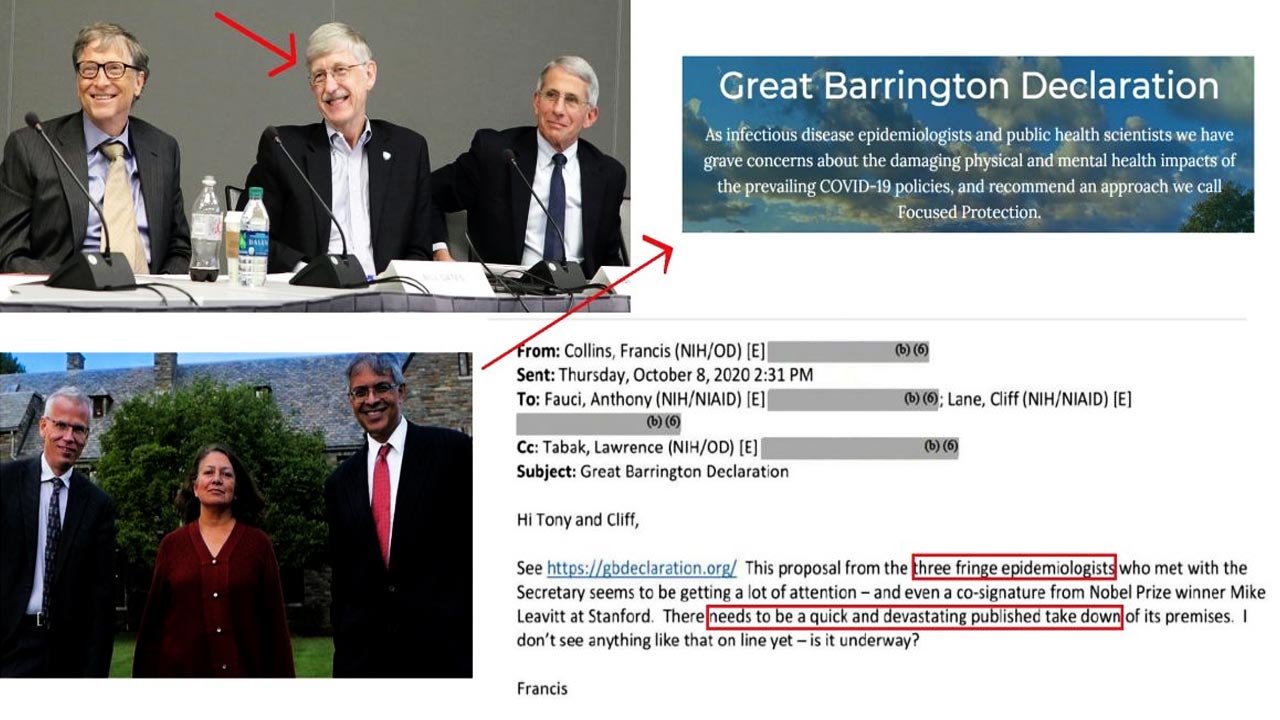 Powerful bureaucrats sought to squash those who promoted alternatives to the government’s tyrannical coronavirus lockdown strategy.

Outgoing National Institutes of Health Director Francis Collins lamented that the Great Barrington Declaration was getting “a lot of attention”. “There needs to be a quick and devastating takedown of its premises,” the NIH Leader told his colleagues Lawrence Tabak, Cliff Lane and Anthony Fauci in an email from October 2020.

For those who are not familiar, the Great Barrington Declaration sought to end coronavirus lockdowns, opting for an approach they dubbed “Focused Protection,” which would aspire to achieve “herd immunity” while protecting the most vulnerable. Not unlike the Rome Declaration, the GB Declaration recognized that combatting the coronavirus needed a strategy that did not do more harm than good.

But Francis Collins did not care about the merit of the “Focused Protection” approach. He sought only to crush dissent. As Senior Writer at Real Clear Investigations Mark Hemingway observed in light of the email leak:

They were more worried about stopping different opinions than the virus.

The emails were discovered by Phillip W. Magness, Ph.D., the Interim Director of Research & Education at the American Institute for Economic Research (AIER). Magness is known in part for his book The 1619 Project: A Critique.

The three “fringe epidemiologists” disparaged by Collins are:

Fauci dutifully responded to Collins with a Wired piece by the renowned scientist (or not) and climate striker Matt Reynolds that Fauci claimed “debunks” the Great Barrington Declaration, and further with an article that he claimed refuted the “herd immunity approach”.

Days after the email exchange, Francis Collins was quoted in the Washington Post denigrating the Great Barrington Declaration:

What I worry about with this is it’s being presented as if it’s a major alternative view that’s held by large numbers of experts in the scientific community. That is not true,’ Collins, NIH director, said in an interview.

‘This is a fringe component of epidemiology. This is not mainstream science. It’s dangerous. It fits into the political views of certain parts of our confused political establishment,’ he said. ‘I’m sure it will be an idea that someone can wrap themselves in as a justification for skipping wearing masks or social distancing and just doing whatever they damn well please.’

“So now I know what it feels like to be the subject of a propaganda attack by my own government. Discussion and engagement would have been a better path,” said Great Barrington Declaration author Dr. Jay Bhattacharya upon seeing the leaked email.

Francis Collins and Anthony Fauci received nationwide attention for their role in forwarding Gain of Function research. The taxpayer-funded research is likely what led directly to the pandemic.

Watch a segment of a tribute to Francis Collins, where Tony Fauci praises the outgoing director. In the clip, Fauci states in part that Francis Collins was able to gain “a truly historic increase in the NIH budget” and gushes that Collins exhibits a “deep commitment to racial, ethnic and gender equity”. Further, Fauci said Collins defended him from “vicious attacks” by “radical elements in society.”

To date, the Great Barrington Declaration has been signed by over 830k people, including tens of thousands of healthcare professionals.