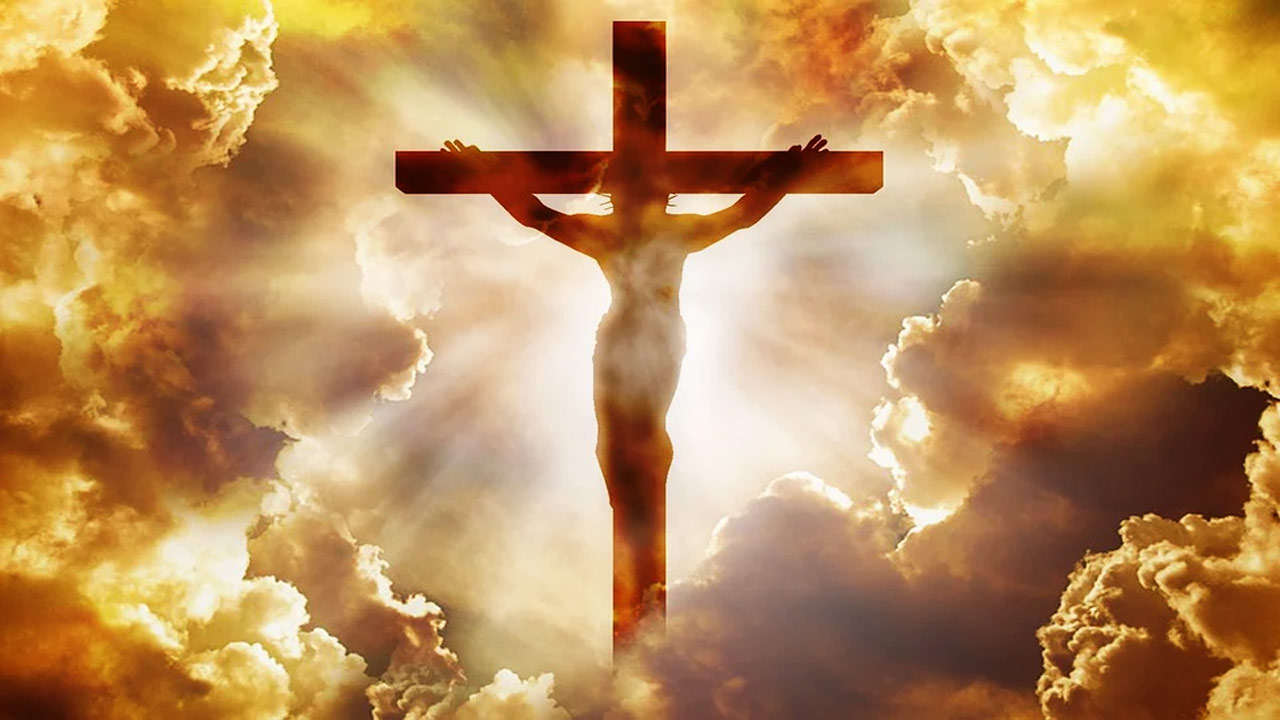 In monotheistic thought, God is conceived of as the supreme being, creator, and principal object of faith. God is usually conceived of as being omnipotent, omniscient, omnipresent and omnibenevolent as well as having an eternal and necessary existence. God is most often held to be incorporeal, with said characteristic being related to conceptions of transcendence or immanence.

God has also been conceived as the source of all moral obligation and the “greatest conceivable existent”. Many notable philosophers have developed arguments for and against the existence of God.

Each monotheistic religion refers to its god using different names, some referring to cultural ideas about the god’s identity and attributes. In ancient Egyptian Atenism, possibly the earliest recorded monotheistic religion, this deity was called Aten and proclaimed to be the one “true” Supreme Being and creator of the universe. In Islam, the name Allah is used, while Muslims also use a multitude of titles for God. In Hinduism, Brahman is often considered a monistic concept of God. In Chinese religion, Shangdi is conceived as the progenitor (first ancestor) of the universe, intrinsic to it and constantly bringing order to it.

Praise the God and Father of our Lord Jesus Christ, who has blessed us in Christ with every spiritual blessing in the heavens. (Ephesians 1:3)

Now to the King eternal, immortal, invisible, the only God, be honor and glory forever and ever. Amen. (1 Timothy 1:17)

Grace to you and peace from God the Father and our Lord Jesus Christ, who gave Himself for our sins to rescue us from this present evil age, according to the will of our God and Father. To whom be the glory forever and ever. Amen. (Galatians 1:3-4)

In the Hebrew Bible and Judaism, the names of God include Elohim, Adonai, YHWH and others. Yahweh and Jehovah, possible vocalizations of YHWH, are used in Christianity. In the Christian doctrine of the Trinity, one God coexists in three “persons” called the Father, the Son, and the Holy Spirit.

The God who gives grace and brings peace is described as “God our Father”. He is personal, and he relates to us personally.

The Bible designates God as the living God. He is a rational being, One who is conscious of His own existence. As the living God, He possesses the attributes of a person.

The Bible, the Word of God, tells us about our Father God, His Son Jesus and Holy Spirit. It is the inspired Word from God.

It was written over long periods of time, and by many writers, and yet is perfect in all ways. Many philosophers and scholars have studied the Word, some to try to discredit it, but could not help seeing that it tells the Truth.

God made plans before the foundations of the world. His son Jesus was already dedicated to coming to us in the flesh as a baby, living a servant’s life for mankind, and because of the sin of Adam and Eve. He suffered persecution, was crucified and died on the cross to pay the price for the sin of all mankind, for all time. He arose on the third day and was seen by many in the city before ascending to His heavenly throne. This is a God who loves us. Do you know any other God who would do such a thing?

Isaiah wrote about the birth and death of Christ over 600 years before He came on the earth. How did he know about Christ? He knew through the Holy Spirit who was giving him the words to write. His words came to pass – exactly.

When the Christ Child was born, the wise men of the east came to follow the new star in the night sky, and they followed by the inspiration of the Living God whose Holy Spirit lead them to the baby. They were bearing gifts to present to Him. How did they know? Through the writings of the Word of God, and the move of the Holy Spirit that was upon them.

Josephes was a historian during the time of Jesus walking on this earth. He followed His story and wrote about it. Josephes was not a believer, but he wanted others to know about Jesus, and about all that was happening at the time.

He gives us great insight into the times and how life was at that time. These are his words, as quoted in Agapius, “The book of the Title”:

“At this time, there was a wise man who was called Jesus. And his conduct was good, and he was known to be virtuous. And many people from among the Jews and other nations became his disciples. Pilate condemned him to be crucified and to die. And those who had become his disciples did not abandon his discipleship. They reported that he had appeared to them after his crucifixion and that he was alive; accordingly, he was perhaps the Messiah concerning whom the prophets have recounted wonders.”

There are archaeologists who have unearthed many treasures of the history back in those days, and of the life of the Messiah, Jesus. We have discovered, over the years, many things to back up the stories of the times.

One of the most important items was the Dead Sea Scrolls, which were written between 150 B.C. and 70 A.D. and hidden in large pots in caves to protect them from those who would destroy them.

The following are some of the most remarkable predictions of Jesus found throughout the Old Testament:

“I will put enmity between you and the woman, and between your offspring and hers; he will crush your head, and you will strike his heel.”

God is determined, in spite of Adam and Eve’s sin, to bring His creation of mankind to a successful end. As the Fall was set in motion through Eve, so will redemption come through a woman. It will be the “seed of the woman,” that is, born of a woman without the agency of man. It is a primeval hint of the virgin birth of Christ, for there has been only one descendant of Eve who was born of a woman without being begotten by man.

This indicates the institution of blood sacrifice, right at the start, as the condition for humanity’s acceptance by God. It is a hint that stands at the beginning of a long line of pictures and predictions of Christ’s atoning death for human sin.

“Through your offspring, all nations on earth will be blessed.”

Here is a clear, definite statement to Abraham, repeated three times, that in him God was founding a nation for the express purpose of blessing all nations through it. This was the nation through whom the Messiah would come.

Then Melchizedek king of Salem brought out bread and wine. He was a priest of God Most High, and he blessed Abram, saying, “Blessed be Abram by God Most High, Creator of heaven and earth. And blessed be God Most High, who delivered your enemies into your hand.” Then Abram gave him a tenth of everything.”

Melchizedek lived in Salem (Jerusalem), the same city where Jesus was crucified. And the bread and
wine are a marvelous primeval picture of the Lord’s Supper and all that it means!

“All peoples on earth will be blessed through you and your offspring.”

The same promise that was made three times to Abraham is here repeated to Isaac and then to
Jacob.

“The scepter will not depart from Judah, nor the ruler’s staff from between his feet, until he comes to whom it belongs and the obedience of the nations is his. . . . He will wash his garments in wine, his robes in the blood of grapes.”

Here is the first clear, definite prediction that one Person would arise in Abraham’s nation to rule all nations (Heb. Shiloh, He whose right it is). He must be the One of whom Melchizedek was a shadow. He would appear in the tribe of Judah. His garments washed in the blood of grapes may be an image of His crucifixion.

Exodus 12. Institution of the Passover

Israel’s deliverance out of Egypt through the death of Egypt’s firstborn. The Lord spared the firstborn in the houses of the Israelites that were marked with the blood of a lamb. This feast was to be kept annually throughout all generations. It became Israel’s principal feast, observed in memory of their deliverance.

The Passover was celebrated for 1,400 years, the central feast of the Hebrew nation. It was unmistakably designed by God to foreshadow the basic event of human redemption, the death of Christ, the Lamb of God. He died on the cross at a Passover feast, bringing eternal deliverance from sin for those marked with His blood, even as the first Passover brought deliverance from Egypt for Israel. It shows how much God’s mind was on the coming of Christ long before He came.

Leviticus 16. The Day of Atonement

The Day of Atonement took place once a year. It involved two goats. One was killed as a sin offering. The high priest laid hands on the head of the other, called the scapegoat, confessing the people’s sin. Then the scapegoat was led away and let go in the wilderness.

This, and the whole system of Levitical sacrifices that were so much part of Hebrew life, is clear, historical foreshadowings of the atoning death of the coming Messiah.

Then the Lord sent venomous snakes among them; they bit the people and many Israelites died. The people came to Moses and said, “We sinned when we spoke against the Lord and against you. Pray that the Lord will take the snakes away from us.” So Moses prayed for the people.

This happened in the wilderness, after the Exodus, on the way to the Promised Land. Jesus understood this to be a picture of Himself being lifted up on the cross (John 3:14). Mankind, bitten by sin in the Garden of Eden, may look to Him and live.

Here is another definite prediction of a person, a brilliant ruler: evidently meaning the same person as “He to whom the scepter belongs” of Genesis 49:10, who is to rule the nations.

The Lord your God will raise up for you a prophet like me from among your own brothers. You must listen to him. For this is what you asked of the Lord your God at Horeb on the day of the assembly when you said, “Let us not hear the voice of the Lord our God nor see this great fire anymore, or we will die.”

The Lord said to me: “What they say is good. I will raise up for them a prophet like you from among their brothers; I will put my words in his mouth, and he will tell them everything I command him. If anyone does not listen to my words that the prophet speaks in my name, I myself will call him to account.”

God would raise up a prophet like Moses, through whom God would speak to mankind.

The Old Testament lay the foundation for the coming of Christ.

And he will be called Wonderful Counselor, Mighty God, Everlasting Father, Prince of Peace. (Isaiah 9:6)

If you are not sure that you are a member of the family of God, you can accept Christ into your life right now, by praying:

“Lord Jesus, I believe you are the Son of God. Thank you for dying on the cross for my sins.  Please forgive my sins and give me the gift of eternal life.  I ask you in to my life and heart to be my Lord and Savior.”