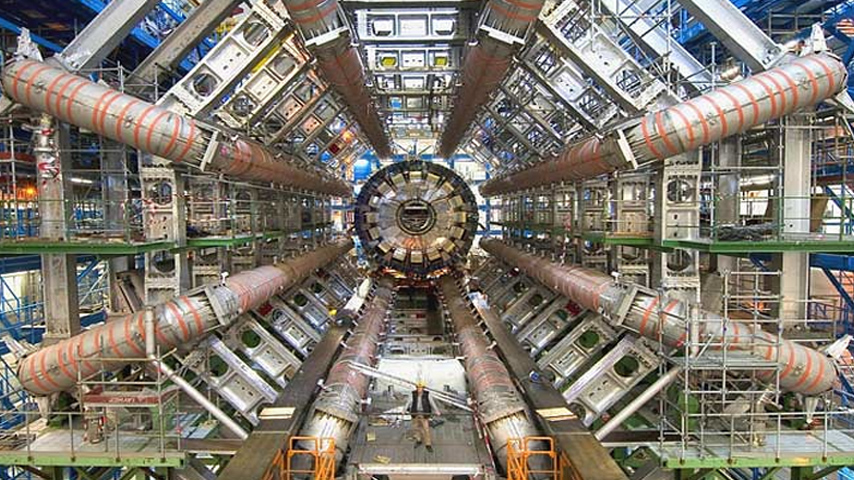 Cern is a seventeen-mile tunnel/circuit that contains nine-thousand, six hundred super magnets propelling protons and ions just under the speed of light, producing one hundred and sixty-four thousand collisions per second. Completing eleven thousand-two-hundred and forty-five circuits per second. Fully operational, the Large Hadron Collider is one-hundred-thousand times hotter than the Sun.

With the advent of the LHC, man has a rudimentary tool capable of opening an interdimensional portal into parallel dimensions. The Large Hadron Collider is the world’s largest particle accelerator machine. Located three hundred feet under the surface of the earth, Cern is attempting to tear the physical and spiritual veil created by God. In the occult, the God of the Bible is known as the Demiurge. The Luciferian elite considers the Demiurge the other God who separates the living from the dead.

Integrated into the LHC is the adiabatic quantum computer, opening a portal to hidden dimensions with the computing power of seven-billion brains. The Large Hadron Collider is attempting to go back in time and take apart the glue of creation. A statue of Shiva, the Hindu god of destruction and transformer, stands above the LHC as an altar and spiritual portal. Lord Shiva is one of the primary deities of the Hindu trinity. Shiva destroys. Vishnu preserves. Brahma recreates. Order out of chaos. As above, So below.

The Large Hadron Collider is tearing the veil that separates the abyss of hell thirty-six hundred miles below the earth and the fourth dimension of the second heaven. Cern was created to destroy time. Eliminating time prevents the eternal judgment from the Demiurge.

Hinduism is the great universal mind. Vishnu the Son is identified as the reincarnation of the avatars. These include Zoroaster, Buddha, Muhammad and Christ. The Son of Perdition, Nimrod and Apollo are the same names for the Anti-Christ, the final avatar. The Large Hadron Collider will recreate the Big Bang and conceive the cosmic egg. This egg symbolizes the sentient resurrected deity of Saturn, Satan, Black Star. These are worshiped by Satanists. Saturn is the luminary who changed his course against the dictates of the Demiurge. In the occult, Jubilees celebrates the resurrected Saturn. Ushering in the Prince of Darkness and the Age of Aquarius/New Atlantis.

Revelation Chapter 9 Verse 1 says, “Then the fifth angel blew his trumpet, and I saw a star that had fallen to earth from the sky, and he was given the key to the shaft of the bottomless pit.”

Remember everything Satan does mimics God. This cosmic egg resents his Bethlehem. The birth of the Beast system and the great final deception of apotheosis. Reflecting the image of Lucifer.

Directly beneath Cern lies the ruins of Apollo’s temple. In the mystery religion, Osiris was worshiped as Apollo, God of the dead. The Large Hadron Collider, in sync with the adiabatic quantum computer, will connect the as above rebellious luminary Saturn, Satan, Black Star with the as below Abyss of Hell… Let’s dig a little further into the origins of Cern. In Celtic mythology, the horned god Cernunnos was known as the God of fertility, Lord of the animals. Synonymous with Baphomet and displayed as a goat pentagram. The sigil of Baphomet is the Church of Satan’s symbol.

Regarded as both good and evil, Samael, the Archangel of Death, sits above the pentagram. And is associated with the temping serpent in Eden and Kabbalah. In the mystery religion, Lilith was Adam’s first wife. She rebelled against God and became the mother of demons. Lucifer is the father of lies, and Lilith is the mother.

The LHC is simultaneously creating an electrical conduit and opening a dimensional portal between the earth and Saturn’s third-largest moon, Lapetus. From here the remaining dark entities will be released to storm the kingdom of God, which was named after the mad titan Nephilim. Lapetus is the son of Uranus and Gaia, father of Atlas and Prometheus.

After being held in chains of darkness for seventy generations, Cern is about to open a stable dimensional portal, allowing Nimrod the Nephilim/Anti-Christ and his horde of dark angels to escape from Hell.

The Book of Enoch, Chapter 10 Verse 15, says, “Bind them for seventy generations underneath the earth, even to the day of judgment, the effect of which will last forever, be completed.”

Even the Vatican has a direct connection to Nimrod. Sitting atop the Egyptian obelisk in St. Peters’ Square, the Eastern Star of Ishtar is a spiritual portal harvesting dark energy. The obelisk is a symbol of the Sun God Ra, the phallus and male energy. In the shape of a sundial and keyhole, St. Peter’s Square symbolizes the destruction of time and the advent of the final stone kingdom. During Satan’s seven-year reign, the Mark will be offered to all humans.

Those who accept the mark will be injected with a Black Goo Programmable Microchip containing the triple helix DNA genome code of Lucifer, Nimrod, and Apollo. Satan is the Kaballah, the tree of life.

Cern is a post-modern Tower of Babel inspired by the spirit of Anti-Christ.

Revelations 9, Verses 1-2 and 1, says, “Then the fifth angel blew his trumpet, and I saw a star that had fallen to earth from the sky, and he was given it. Smoke poured out as though from a huge furnace, and the sunlight and air were darkened by the smoke. Their king is the angel from the bottomless pit; his name in Hebrew is Abaddon, and in Greek, Apollyon – The Destroyer.”

Displaying a similar hexagonal shape, the LHC is electrically bridging Saturn’s eight-sided North Pole by creating a plasma conduit. Empowered by the ether contained within the second heaven of the fourth dimension, Saturn’s twenty-thousand-mile-wide blue hexagonal portal will open, liberating the wicked spirits imprisoned within the Black Cube, which is located in the center of Saturn.

One of Cern’s four collision vectors contained within its seventeen-mile circular underground tunnel is Alice in Wonderland. Alice is the code word for Lucifer; it is a detector capable of observing collisions of atomic nuclei in their primordial state so as to recreate and understand the fictitious Big Bang. In the fable, Alice returns to the whimsical world of Wonderland, traveling back in time to help the Mad Hatter, who is recognizable by his top hat. This is the same top hat worn by Freemasons. Alice and the Freemasons also wear aprons to display their good works for the Light Bearer. Kabbalah teaches that the leaves of the fig tree convey the power of sorcery and magic.

The mystery religion teaches there are magical powers in fig leaves as represented by the aprons. Previously the Babylonians, Egyptians, and some Mormon sects have paid allegiance to Lucifer by displaying their aprons. This brings us to the connection between the white rabbit, who uses his watch to destroy time in both Alice In Wonderland and Alice in Cern. To live outside of time is to be a God. With Satan’s guidance, the Large Hadron Collider will go back in time with the purpose of destroying time.

Time is a flexible substance that legitimizes matter. Without time, death does not exist. Six thousand years ago, Lucifer failed to set Adam and Eve free from their prison of time. Prior to the fall, they were eternal transdimensional shifting beings, free from the confines of space and time.

Each of the ten heavens has different times. Satan is attempting to change the times and seasons on earth. The days are evil, collapsing out of Eden’s time. Time prevents eternal life and predestines judgment. Lucifer’s offense was the desire for power. Man’s was the desire for knowledge. Therefore, Luciferian believe it is the elimination of time that will free man from the tyranny of the Demiurge. The key to freedom is to go back in time and destroy it.  Without time, man becomes a god…