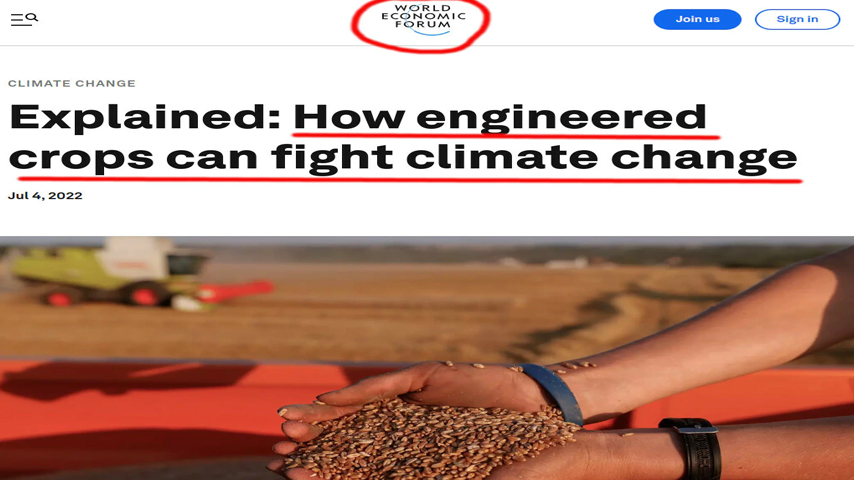 Their Polymer Roots Never Rot. What can go wrong?

I decided to write about something new so that my readers would not get bored or too saddened by the recent birth rate news. So, I logged onto the World Economic Forum’s website, hoping to wade through their articles for a while in search of some random crazy idea to write about.

It turned out that the very first article WAS a crazy idea!

The World Economic Forum has a new proposal (archive): engineered crops whose roots DO NOT ROT when the plants die, and “capture carbon”.

Their plan (per article) is as follows:

So, after we stop eating meat, they plan on liquidating pastures and planting those genetically engineered “carbon-capturing” plants on the pasture land.

The plants would have genetically altered polymer roots (archive) that will not decompose. Think of these roots, for the purposes of discussing decomposition, as being made of plastic polymers, like plastic fibers or ropes.

Thus, the WEF plan goes, these GM plants would grow in former pastures, grow polymer roots, and die every year, BUT THE ROOTS WILL NOT DECOMPOSE. Since the roots do not decompose, the soil will gradually become firmly permeated by a thickening tangle of never-disappearing polymer roots. Those roots would hold CO2 forever.

Great right? Except that I have some questions:

And, lastly, the biggest concern: What if these plants become so successful and widespread beyond pastures, that they remove TOO MUCH carbon from the atmosphere, turn out all soil into an endless tangle of dead plastic-like root material, and leave no other carbon dioxide to feed normal plants and plankton?

Remember that all plants need CO2 to grow: they capture it via photosynthesis and convert it into plant material. No plants can live without CO2!

If not controlled, the lab-designed “carbon capturing plants” could suck CO2 out of the atmosphere and make soil logged with non-decomposing polymer fibers, and end our plant life which depends on CO2.

We are having a problem with Sars-Cov-2, which science was able to design, but isn’t able to stop. What if the genetically modified plants spread beyond pastures, into fields and wild forests?

What if this ends with the Earth being frozen (due to too much CO2 removed), barren (due to polymer roots preventing normal growth and too little CO2 to support plant and aquatic plant development), and a grey planet with no room for any other plant life?

I doubt that any WEF dreamer is asking these questions. Or are they? Is there anyone not on their payroll who is looking at this with the absolutely highest degree of skepticism? Or are WEF’s paid acolytes purposely dismissing such reasonable concerns as “conspiracy theories” using paid “fact checkers”?

I understand that there is money to be made from buying pastures and converting them to polymer-rooted plants and capturing “carbon credits” and making profits. I am pro-business. At the same time, I want my planet to have a future for my kids and (hopefully) future grandchildren.

These people are working on outlandish projects, using billions in dark funding, with essentially no adult supervision or questioning allowed. This reminds me of “virologists”, messing around creating chimeric viruses, without effective oversight. We know how that ended.

Would you plant those plants in your garden to help capture CO2?