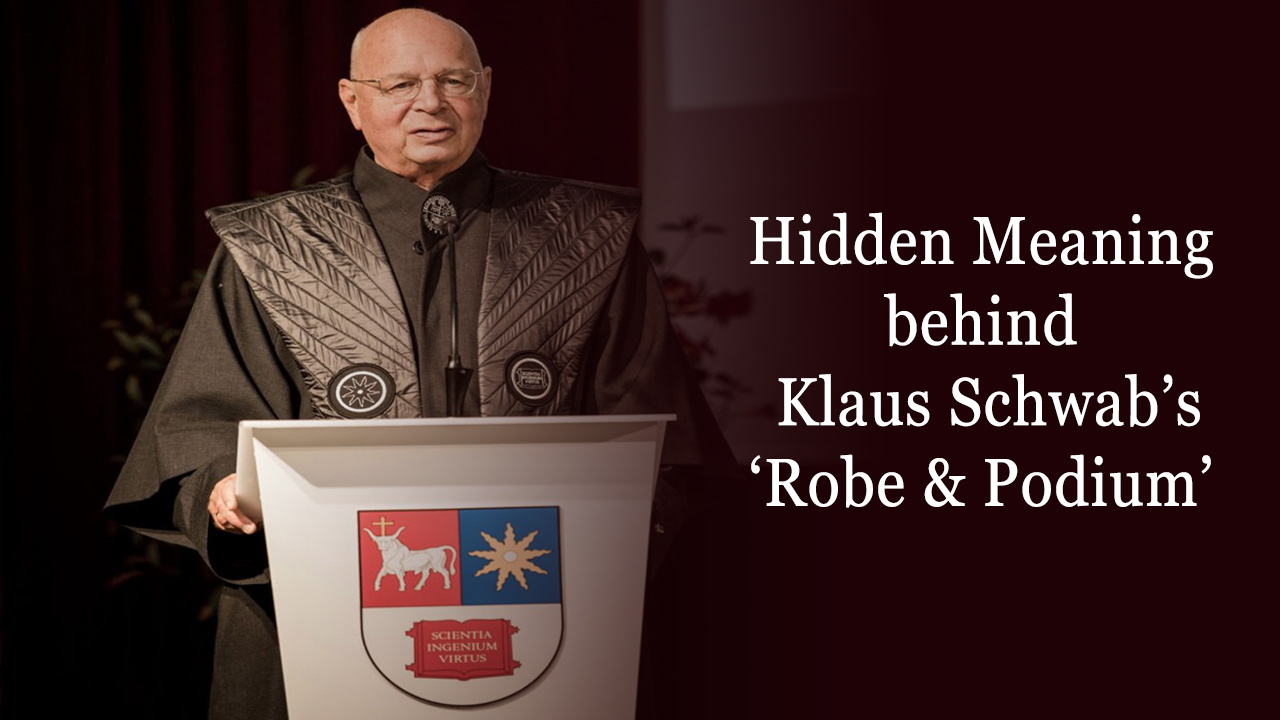 While observing the above photo of Klaus Schwab you’ll notice a nine-pointed star on his robe and podium. This is the Star of Ishtar, known as the Enneagram. The Enneagram is the fusion of all that is and used as a vehicle for the pursuit and interaction of cosmic deities (demons), knowledge and an examination of the good and bad side of people.  To foster a greater understanding through a universal language transcending religion, nationalism. and culture. Using sacred geometry the Enneagram is an esoteric tool used to seek mental equilibrium without the interference of God.  A modern reflection and symbolic representation of The Tower of Babel.

The triangle of Freemasonry combined with the pentacle forms of an Enneagram represents the Satanic Trinity.  Baha’i Faith is the latest religion of deception purposing all of the people and faiths of the world are the same and should unite into a one-world religion.

Another prominent icon displayed on both Schwab’s robe and the podium is a bull with a cross positioned between his horns. The is the symbol of the pagan mystery religion Mithraism. Mithras is also known as Sol Invictus or RA the unconquered sun god.

Upon close inspection, the podium banner icon in front of professor Schwab contains the Latin inscription “Scientia Ingenium Vitus”. Translated into English…” Knowledge Of Immense Power”…  This is Gnosticism. The occultic belief that knowledge leads to enlightenment and eternal life apart from the God of the Bible.

Klaus Schwab is a transhumanist.  His aspirations for technocratic control appear to tie into Elon Musk’s development of Neuralink, a brain interface machine built to connect man to Artificial Intelligence.

Schwab has famously stated, ” The end of  The 4th Industrial Revolution will lead to a fusion of our physical, our digital, and our biological identities.”  His book entitled “The 4th Industrial Revolution” sold 1 million copies, mostly in China, Japan and South Korea, where the technocracy is rolling out quicker. And it was the South Korean military who purchased the most copies of the book in order to prepare for any coming conflict.  A digital “Art of War.”

Schwab is also the founder and executive chairman of the World Economic Forum, employing over seven hundred people, with its headquarters in Geneva, Switzerland, and additional offices in New York, San Francisco, Beijing and Tokyo.  Professor Schwab founded the WEF in 1971 and holds doctorates in engineering and economists.

According to Schwab, “The pandemic represents a rare but narrow window to reflect, reimagine and reset our world.” This is otherwise known as “The “Great Reset.” In practical terms, The Great Reset is a new social contract connecting everyone to an electronic ID linked to each individual’s crypto bank account and health record.

The mechanism of enforcement will be a social credit score controlling every facet of life.  The COVID-19 pandemic was merely used as a trojan horse to implement The Great Reset.  A diabolical agenda has nothing to do with health and everything with monitoring and controlling the world through digital surveillance and artificial intelligence.

The Great Reset and the Fourth Industrial Revolution have rebranded terms for technocracy and the old “New World Order” melded with the transhumanist movement. Technocracy is an economic system of resource allocation that revolves around technology — in particular, artificial intelligence, digital surveillance and Big Data collection — and the digitization of industry and government, which in turn allows for the automation of social engineering and social rule, thereby doing away with the need for democratically elected leadership.

Already world leaders such as Boris Johnson and French president Marcon have changed the titles in their Facebook profiles from MP and President to just politician. During the seven-year tribulation, ten world leaders will ultimately play second fiddle to the anti-christ, ruler of the final technocratic beast system.