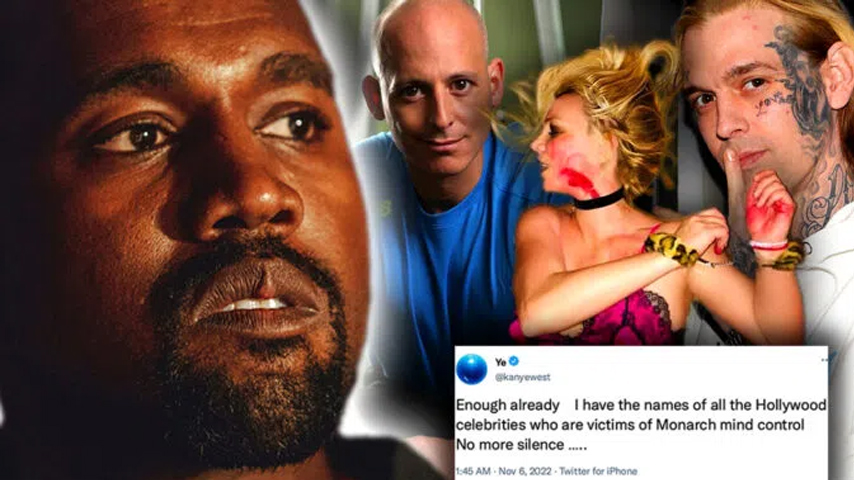 Who is Harley Pasternak, the man whom Kanye West has publicly accused of trying to institutionalize him, drug him into oblivion, take his kids away, and destroy his life? As it turns out, this “personal trainer” is connected to psychological operations, the Canadian military, and other strangeness.

First, let’s take a look at the tweet that unleashed the storm. Kanye West accused his personal trainer of threatening to have him institutionalized “again”, drugged out of his mind, and have his children taken away from him.

What kind of “personal trainer” has this type of power?

So I will say this again I was mentally misdiagnosed and nearly drugged out of my mind to make me a manageable well behaved celebrity pic.twitter.com/3kRuxoLcts

Finding information on Harley has become complicated by recent events. For some strange reason, his Wikipedia page was edited after Kanye’s tweet. I wonder why?

This is his current page, listing his most notable achievements, the books he has published, his educational qualifications, and celebrity clients he has worked with.

And this is the archived version from before Kanye exposed him on Twitter. Notice anything missing?

Someone recently removed from Harley Pasternak’s Wikipedia entry two main things. Any reference to Kanye West. And the lengthy list of his celebrity clients. Curious, isn’t it?

Here’s the list of Harley’s noteworthy clients. Someone doesn’t want you to see this. Note that some of his former clients had mental breakdowns or died under suspicious circumstances, most notably Mac Miller and Brittany Murphy.

Pasternak was closely involved with Brittany Murphy before she died. The autopsy report indicated that she died of an overdose thanks to a wide assortment of prescription pills that were in her system at the time of her death.

This in itself wasn’t the mysterious part. What was perhaps even odd is that her husband, Simon Monjack, died only five months later in a similar manner. We were told that their lifestyles led to their ultimate demise, but Brittany Murphy’s half-brother, Tony Bertolotti, isn’t buying that explanation.

He told the Daily Mail, “I spent years looking at this, suppressing my own anger. I think Brittany was taken out. Who killed Brittany? She didn’t die of natural causes.”

Also worth noting is the fact that Kanye West was hospitalized in late 2016. Where was he at the onset of his alleged breakdown, when he was institutionalized against his will? Harley Pasternak’s home, of course! Note that in the text messages Kanye posted, Harley threatens to have him institutionalized “again.”

But just who is Harley Pasternak? He’s a personal trainer, right? Let’s take a closer look at his background. At first glance, nothing stands out. He’s just an educated man with a master’s degree in exercise and nutrition science. But that isn’t the full story…

His Wikipedia page states that “During his time at U of T, Pasternak served as a nutrition and exercise scientist at the Department of National Defence’s Defence and Civil Institute for Environmental Medicine.”

The Department of National Defence is the Canadian government’s department that “supports” the Canadian Armed Forces. It’s a civil organization, a support system for the military.

Harley Pasternak worked as a scientist for two years at DRDC Toronto, one of Defence Research and Development Canada’s military research stations.

What sort of stuff is researched at DRDC? “Human systems integration.” “Social and psychological factors that affect the resolution of conflict.” “Psychology of malicious intent.” “Social and cultural factors influencing behavior.”

But we don’t have to read between the lines. Harley Pasternak spells it out for us:

“Working for the military, I wasn’t governed by the same laws that the typical person was, so I could look at the impact of certain drugs that are not everyday things.”

The stuff with the DND gets weirder. This branch of the Canadian government once included the Defence Research Board (DRB). The DRB quite literally funded MKUltra, as did the CIA. This program involved forced experiments with drugs, sensory deprivation, and brainwashing.

So Harley Pasternak, the Hollywood “personal trainer”, who once got Kanye institutionalized – and is threatening to do it again, have him drugged until he’s in Zombieland, and take his kids away – was a scientist at a psyop-oriented military research center, whose work focused on drugs.

For anyone interested in celebrity mind control and the power structures that rule over us, this is a rabbit hole worth going down.

Many celebrities’ breakdowns have probably been motivated by stress with no foul play involved. But the text messages Kanye posted were pretty damning: “Do what we say or lose everything.” That raises questions about other celebrities who we have been told to write off as lunatics.

You don’t have to be a conspiracy theorist to understand if the elites assign handlers to celebrities, particularly those deemed unpredictable or hard to control, with the purpose of keeping those celebrities in line, those handlers would look a lot like Pasternak.

Pasternak is likely an intermediary for more powerful, shadowy forces in Hollywood. Because personal trainers just don’t have the power to have clients institutionalized on a whim.

We are rarely able to peer behind the curtain. Episodes like this are important because they reveal the secret power dynamics at play in elite society, the mechanisms by which even ultra-wealthy celebrities are kept in line. A vast matrix of control exists to keep celebrities in line.

For those interested in a deeper dive, it is worth researching Monarch Programming, a method of mind control used by numerous organizations for covert purposes. Monarch is a continuation of project MK-ULTRA, a mind-control program developed by the CIA, and tested on the military and civilians. The methods are sadistic (its entire purpose is to traumatize the victim) and the expected results are horrifying: The creation of a mind-controlled slave who can be triggered at anytime to perform any action required by the handler.

While mass media ignores this issue, over 2 million Americans have gone through the horrors of this program.

Monarch programming is a mind-control technique comprising elements of Satanic Ritual Abuse (SRA) and Multiple Personality Disorder (MPD). It utilizes a combination of psychology, neuroscience and occult rituals to create within the slaves an alter persona that can be triggered and programmed by the handlers.

Monarch slaves are used by several organizations connected with the world elite in fields such as the military, sex slavery, and the entertainment industry.

Throughout the course of history, several accounts have been recorded describing rituals and practices resembling mind control. One of the earliest writings giving reference to the use of occultism to manipulate the mind can be found in the Egyptian Book of the Dead. It is a compilation of rituals, heavily studied by today’s secret societies, which describes methods of torture and intimidation (to create trauma), the use of potions (or drugs) and the casting of spells (or hypnotism), ultimately resulting in the total enslavement of the initiate.

However, it is during the 20th century that mind control became a science in the modern sense of the term, where thousands of subjects have been systematically observed, documented and experimented on.

One of the first methodical studies on trauma-based mind control was conducted by Josef Mengele, a physician working in Nazi concentration camps. He initially gained notoriety for being one of the SS physicians who supervised the selection of arriving prisoners, determining who was to be killed and who was to become a forced laborer. However, he is mostly known for performing grisly human experiments on camp inmates, including children, for which Mengele was called the “Angel of Death”.

Mengele is infamous for his human experiments on concentration camp prisoners, especially on twins. A part of his work that is rarely mentioned, however, is his research on mind control. Much of his research in this field was confiscated by the Allies and is still classified to this day.

Project MK-ULTRA ran from the early 1950s to at least the late 1960s, using American and Canadian citizens as its test subjects. The published evidence indicates that Project MK-ULTRA involved the use of many methodologies to manipulate individual mental states and alter brain functions, including the surreptitious administration of drugs and other chemicals, sensory deprivation, isolation, and verbal and physical abuse.

Although the admitted goals of the projects were to develop torture and interrogation methods to use on the country’s enemies, some historians asserted that the project aimed to create “Manchurian Candidates”, programmed to perform various acts such as assassinations and other covert missions.

MK-ULTRA was brought to light by various commissions in the 1970s, including the Rockefeller Commission of 1975. Although it is claimed that the CIA stopped such experiments after these commissions, some whistle-blowers have come forth stating that the project simply went “underground” and Monarch Programming has become the classified successor of MK-ULTRA.

The levels of Monarch Programming identify the slave’s “functions” and are named after the Electroencephalography (EEG) brainwaves associated with them.

Regarded as “general” or regular programming,  ALPHA is within the base control personality. It is characterized by extremely pronounced memory retention, along with substantially increased physical strength and visual acuity. Alpha programming is accomplished by deliberately subdividing the victim’s personality which, in essence, causes a left-brain-right-brain division, allowing for a programmed union of Left and Right through neuron pathway stimulation.

DELTA is known as “killer” programming and was originally developed for training special agents or elite soldiers (i.e. Delta Force, First Earth Battalion, Mossad, etc.) in covert operations. Optimal adrenal output and controlled aggression are evident. Subjects are devoid of fear and very systematic in carrying out their assignment. Self-destruct or suicide instructions are layered in at this level.

THETA – Considered the “psychic” programming. Bloodliners (those coming from multi-generational Satanic families) were determined to exhibit a greater propensity for having telepathic abilities than did non-bloodliners. Due to its evident limitations, however, various forms of electronic mind control systems were developed and introduced, namely, bio-medical human telemetry devices (brain implants), and directed-energy lasers using microwaves and/or electromagnetics. It is reported these are used in conjunction with highly-advanced computers and sophisticated satellite tracking systems.

It is difficult to remain objective when describing the horrors endured by Monarch slaves. The extreme violence, abuse, mental torture and sadistic games inflicted on victims by “notable scientists” and high-level officials prove the existence of a true “dark side” in the powers that be.

Despite the revelations, the documents, and the whistle-blowers, a great majority of the population ignores, dismisses or avoids the issue altogether. Over two million Americans have been programmed by trauma mind control since 1947 and the CIA publicly admitted its mind control projects in 1970.

Movies such as The Manchurian Candidate have directly referred to the subject, even depicting actual techniques, such as electroshock, the use of trigger words and microchip implementation. Many celebrities and public figures we see on our TV and movie screens are mind-control slaves.

Famous people such as Candy Jones, Celia Imrie and Sirhan Sirhan have gone on record and disclosed their mind control experiences…and yet the general public claims that it “cannot exist”.

This is why Kanye West’s revelations are so important. They are providing us with a peek behind the curtain of the elite.