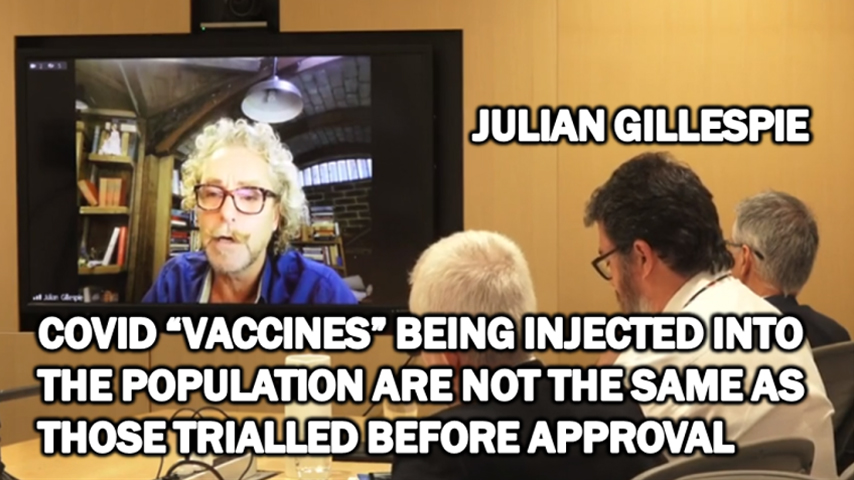 Covid Under Question was a cross-party inquiry into the Australian government’s response to Covid. Parliamentarians heard from a range of doctors, experts, economists and everyday people about how the Government’s response to Covid has affected them and at times defied belief. The absurdity of Chief Health Officer dictates and power-hungry politicians were all laid bare.  The full day’s proceedings, with transcripts, are available HERE.

Gillespie believes that the Australian people have not been given accurate information about Covid deaths and deaths from the Covid injections.  During an interview with Zeee Media at the beginning of this year, he explained that he was hoping to bring a substantive case regarding Covid injections before the Federal Court in February when the courts re-opened.  On 23 March he stepped out of the court hearing to testify before the Covid Under Question panel.

“The first limb of our evidence is the unprecedented injuries and deaths that we are witnessing across the community,” Gillespie told the panel.

“Historically vaccines in this country, between the years of 1971 up to 2020 averaged 2.4 deaths per annum. As of today’s date, we have reported to the Therapeutic Goods Administration [“TGA”] adverse event database, as many as 800 deaths as a consequence of these vaccines.  So, we’ve got 2.4 deaths historically per year. Now in the last 12 months, we’ve got 800 … [and] what we’ve got now are over 110,000 adverse event reports with respect to these vaccines.”

The second point, he said, is that the Department of Health, and indeed every other regulator around the world, had assured and continues to assure their respective publics that these vaccines could not, and would not, interfere with the nucleus of cells.

“What we have discovered is that these spike proteins are indeed infiltrating the nucleus, where they are now inhibiting DNA damage repair … [a] peer review report … three weeks ago [shows] that the mRNA that is contained within these vaccines is also entering the nucleus. It is interfering in measurable form, with the DNA … It is causing disruption to a number of typical chemical activities. One of those involves the protein production of protein line one. When you disrupt line one, you lose embryos within females. The other disruption to line one, again, is another precursor of any cancer that you wish to name.”

Gillespie explained that none of the genotoxicity or carcinogenicity tests were conducted on the Covid “vaccines” that should have been conducted prior to authorizing them as safe for injecting into the public.

“This is the first time in the history of drug regulation in this country, that the TGA did not bother to look at these critical, fundamental, attributes of the drug … this is the first instance that mRNA technology delivery systems with the lipid nanoparticles have been provided to the human or apes. In those circumstances, we have a radically new technology. It was incumbent upon regulators globally to look at the genotoxicity, and the issues with respect to cancer, and none of that was done.”

“That evidence was put at the feet of the Secretary of Health one week ago. He has until tomorrow to suspend or cancel the drugs based on the fraud. Because of his inaction to investigate the fraud or any aspect of it, we once again, expect the secretary is going to ignore us, so that information will be put under affidavit. We’ll go into the substantive hearing, which is next scheduled for the 20th of April. That’s the next earliest date.”

A further point is that the “vaccines” being massed produced and injected into the population are not the same as those trialed before approval.

In addition, the mRNA integrity between batches varies radically. The variance has been between 81.3% to 55.7%.  “We’ve never seen such instability in drugs,” Gillespie said, “there’s plenty of data to show the history of vaccine stability and integrity going back 20 years where the variance goes very little above, like, a percentage above zero. But here we’re getting answers of 30 or 40% in terms of integrity.”

“A recipient of a batch above 72% mRNA integrity is essentially getting a toxic dose. Had they used 80% mRNA toxicity in the clinical trials, we would’ve seen a lot of problems. They would’ve scaled back the actual dosage below the 30 micrograms that are currently being administered now.”

Gillespie then explained the role AHPRA has played in Covid policies, how they were formed, who they answer to and how established scientific pandemic guidance and advice was replaced by World Health Organisation (“WHO”) recommendations “which were radically opposite to the science that Australia had already invested in,” under their own influenza pandemic plan.

“Once [WHO’s recommendations were] adopted and sent up from the AHPPC to the national cabinet, that’s where Scott Morrison could say with plausible deniability: ‘These are the best recommendations in the world. We must pursue these. I’m going to give you all the share of just over $7 billion to go and implement quarantining, lockdowns, school closures, and work placed closures. Now run along’.

“Now, with that incentive over $7 billion offered as the carrot, that’s where we saw individual states run back, premiers run back to their states and territories. And in their own hazardous ways start implementing as many of those items as they possibly could, even though they were co-authors on the pandemic influenza plan back in August of 2019.

“Every single health department and every single state and territory was a co-contributor, and author of that pandemic plan. They knew the science but instead wanted to take the cash that Mr. Morrison was offering them.

“The AHPPC is the new body which AHPRA answers to.”

This is the Reason they’re Pushing the Boosters?