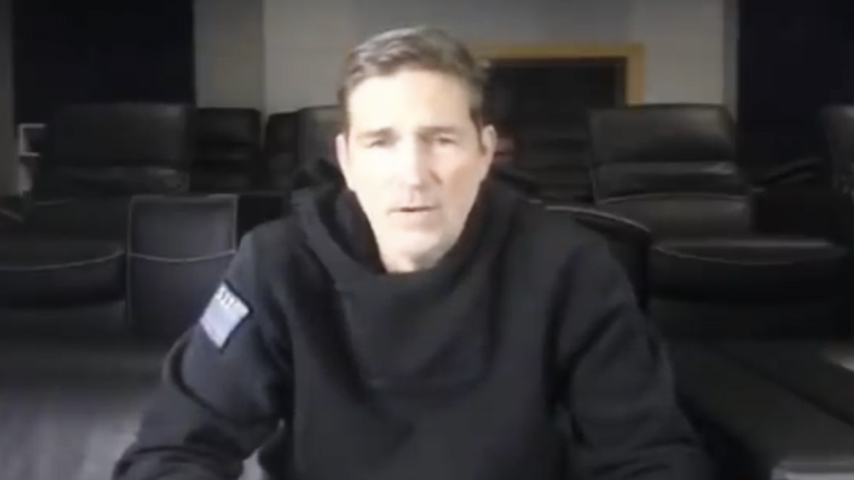 Do you recognize Jim Caviezel?

He played Jesus in the Passion of the Christ.

And now he’s making another powerful movie, this time to expose the evils of Child Sex Trafficking.

He is a man on a mission.

Actually, the movie is a few months old at this point, but I recently came across this clip that blew my mind.

Not only is Caviezel taking on child sex trafficking, but he’s exposing some of the deepest and darkest secrets that most will not even speak of….like Adrenochrome.

Caviezel is bringing it out in the open and I am so proud of this guy.

What a legendary life he is leading.

Now, before I show you the clip, I have to make sure you know what this is in case you’ve never heard of it before.

Adrenochrome is a chemical compound produced by the oxidation of adrenaline (epinephrine). It was the subject of limited research from the 1950s through to the 1970s as a potential cause of schizophrenia. While it has no current medical application, the related derivative compound, carbazochrome, is a hemostatic medication. Despite this compound’s name, it is unrelated to the element chromium; instead, the ‑chrome suffix indicates a relationship to color, as pure adrenochrome is deep violet.[1]

Of course, the MSM tries to claim that’s just a “QANON conspiracy”.

Even MensHealth was called upon by the powers that be to discredit it, take a look:

Supporters of the far-right wing group QAnon are spreading a dangerous conspiracy theory that the blood of kidnapped children is being harvested by liberal elites for a drug called adrenochrome, which they say offers a psychedelic experience and even holds the promise of immortality for those who take it.

While that may sound patently ridiculous, the adrenochrome conspiracy theory has now made its way beyond the bloodshot eyes of YouTube investigators and into mainstream culture, such as when Dr. Phil featured a woman on his show who claimed that her missing daughter had been kidnapped and tortured for the chemical.

And if you’re wondering why it is important to pay attention to this sort of thing, well, let’s start with the fact that more than two dozen congressional candidates have shared QAnon material or even appeared on QAnon shows. Like it or not, there are signs the group’s influence is growing.

Let’s explain what adrenochrome is, what QAnon wants you to believe it is, but is definitely not, and what’s the harm in believing in such misinformation.

What is adrenochrome?
Adrenochrome is a chemical that’s a byproduct of adrenaline. That’s it. It turns out you don’t need to kidnap children and drain their blood. There are many trusted chemical suppliers, in fact—which we won’t be linking to, sorry—that sell it.

Back in the ’50s, scientists speculated that adrenochrome caused schizophrenia. Take a megadose of vitamin C, one researcher concluded, and adrenochrome along with schizophrenia should vanish. That…didn’t work, alas.

But the lack of real science didn’t stop adrenochrome from sounding cool enough to make it into drug lit classics like Aldous Huxley’s The Doors of Perception and Anthony Burgess’ A Clockwork Orange.

The source of the myth that you need to steal adrenochrome from a corpse goes back to a fun scene in Fear and Loathing in Las Vegas, in which Dr. Gonzo, Hunter S. Thompson’s “attorney,” says adrenochrome “makes pure mescaline seem like ginger beer.” Later, it is explained that “there’s only one source for this stuff—the adrenaline gland from a living human body.” It’s an easy mistake to make, but please know that Fear and Loathing in Las Vegas is not a documentary feature made from archival footage of actual events.

A favorite topic of interconnected QAnon and Pizzagate conspiracy communities, so-called “adrenochrome harvesting” long predates these groups. It has, however, resurrected during the Covid-19 pandemic. Google Trends shows significant spikes in searches for adrenochrome in March and June of 2020. It’s prevalent on TikTok, Youtube, and Instagram. Reddit removed a dedicated adrenochrome subreddit on July 30. On Friday, July 31, conspiracy theorists plan to hold the first “Child Lives Matter” protest in Hollywood to “expose” child trafficking, advertising the event with references to #adrenochrome.

The adrenochrome harvesting conspiracy theory is a potent example of “hidden virality” and the ways in which unpopular culture animate social media platforms outside of the mainstream view. Named by researchers Britt Parris and Joan Donovan, hidden virality describes dominant content in specific pockets of the internet that are largely unseen by journalists and mass audiences, making them difficult for social media companies to identify and act upon. The impact of hidden virality can’t be stopped by retroactively banning a few thousand Twitter accounts; it is an iterative, memetic phenomenon that outpaces terms of service. Even with early intervention by Reddit and recent movements by Twitter, Facebook and TikTok to crack down on QAnon, adrenochrome harvesting remains a mainstream conversation for some online communities.

Toxic social attitudes spread virally alongside hoaxes and disinformation. Adrenochrome harvesting isn’t outwardly blamed on Jews, but on “satanic” and “globalist” elites—dog whistle terms for the far right. The modern adrenochrome obsession is a permutation of blood libel, an anti-Semitic myth that pervaded Europe throughout the middle ages, and a mutated strain of medical misinformation.

The Lineage of a New Blood Libel
The most effective conspiracy theories are built around kernels of truth. Adrenochrome is a compound that occurs in the body, but about which little scientific research has been done beyond a few studies in the mid-20th century on whether it could play a role in schizophrenia. The question transfixed the writers Aldous Huxley and Hunter S. Thompson, who were obsessed with mind-altering substances. To them, adrenochrome became a psychotropic, akin to mescaline. In his famous Doors of Perception, written just after the first adrenochrome studies, Huxley described adrenochrome as a clue that was “being systematically followed.” “The sleuths—biochemists, psychiatrists, psychologists—are on the trail,” he wrote. Biologists didn’t find much of interest.

Nearly 20 years later, Thompson cast adrenochrome as a psychedelic that must be violently extracted from human glands in his novel Fear and Loathing in Las Vegas. The scene was immortalized in Terry Gilliam’s 1998 film; a YouTube clip of Johnny Depp’s character taking adrenochrome, which to date has more than 1.7 million views, has drawn thousands of comments referencing the conspiracy.

Thompson is explicitly invoked in what seems to be the earliest recorded posts about adrenochrome harvesting on 4Chan’s /x/ and /pol/ boards, in 2013 and 2014 respectively. In an anti-Semitic 4chan /pol/ thread an anonymous poster linked a restricted, unsearchable video named “Jew Ritual BLOOD LIBEL Sacrifice is #ADRENOCHROME Harvesting.” Within these same online communities, Pizzagate formalized and grew in 2015–2016 before spreading to more mainstream social media.

In 2016 this same video was shared in a Pizzagate thread about the artist Marina Abromovich and her “spirit cooking” ceremonies. The next several months saw increasingly outlandish claims online, particularly that the Pixar film Monsters Inc. was a cryptic reference to adrenochrome harvesting. As some Pizzagate adherents entered the burgeoning QAnon community in 2017, they brought the adrenochrome conspiracy with them.

These factions expanded their audiences in 2018, citing new “investigations” and circulating the rumor that a (hoax) website sold adrenochrome in exchange for cryptocurrency. Conspiracy filmmaker Jay Myers released a video, “Adrenochrome The Elite’s Secret Super Drug!” While the original video was taken down, it remains live on his backup channel and has been uploaded elsewhere online.

In February 2019, Infowars featured a segment on adrenochrome, linking it to the Clinton Foundation via epipen manufacturers, and to the highly controversial “young blood” transfusion startup Ambrosia. A month later, adrenochrome “documentaries” began to emerge on YouTube, followed by many smaller copycat productions, helping form a searchable foundation for the current day conspiracy.

The recent surge in interest can be traced to March 2020 and the effects of the Covid-19 pandemic. Celebrities posting photos of themselves stuck at home and looking less than camera ready were besieged on social media with accusations that they were suffering from adrenochrome withdrawal. (In their logic, shutdowns had stalled the adrenochrome child-trafficking supply chain.) By commenting on these posts, believers spread the adrenochrome hashtag to new eyes while harassing their targets.

Despite this increased visibility, conspiracy outlets accused major social media platforms and media of plotting to suppress the truth about adrenochrome. Adrenochrome conversation continued and intensified on social media, from claims Lady Gaga was participating in blood rituals for an adrenochrome fix, to the Covid-19 “spiked adrenochrome’ theory popularized by Pizzagate booster Liz Crokin. Despite claims of censorship, Google trend results showed that spamming celebrities’ pages with mentions of adrenochrome was working, leading to a spike in search traffic and social media conversation.

And he’s not being quiet about it.

Listen to Jim Caviezel. He just did a True Story movie about Trafficking. Sounds of Freedom https://t.co/nNMoiy7Mrw pic.twitter.com/nRUTccNuGA

But I thought this wasn’t real?

If you haven't heard of adrenochrome or even if you have this is the truth behind it. $20,000 per dose. No wonder only the rich can get it. https://t.co/7j3N2FgsR7

One more sip of the adrenochrome..👍🏽🍷 pic.twitter.com/51VSb95C6e