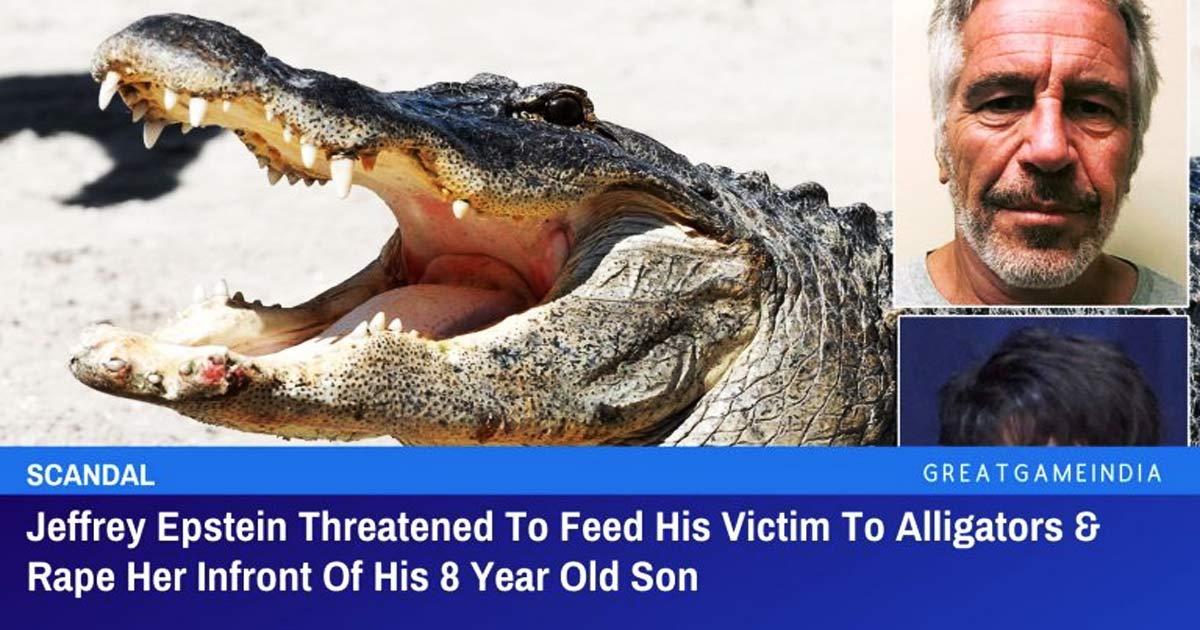 A woman has alleged that Jeffrey Epstein kidnapped and raped her. She was sexually abused by Epstein in 2008 at his palm beach. He also repeatedly raped her in front of his 8-year-old son. Jeffrey Epstein then threatened to feed her to alligators if she shared the incident with anyone else.

The victim, a real estate broker has complained about it last week and filed a lawsuit.

As per the lawsuit filed and made public by the Miami Herald, she sued Epstein’s estate over torture she claims to have suffered under his confinement.

She was introduced to Epstein and Ghislaine Maxwell by her employer, a close friend of Epstein.

He used to pay her with expensive gifts and committed to offering great employment opportunities to her and her husband as well.

After 6 months of effort, Ghislaine Maxwell stole her passport and hid it in a lockbox somewhere. She then agreed to do some work for Epstein.

She was asked to cut his hair. She found him and Maxwell nude when she arrived at his house. This job offer was a trap and they both assaulted her sexually, the lawsuit claims.

They also threatened her with a prostitution arrest, deportation, and taking her son away.

After raping her, Maxwell and Epstein drove the woman to pick up her son and stopped the car “at a pond filled with alligators.”

“Epstein then ushered the Plaintiff to the body of water and told her in explicit detail that, as had happened to other girls in the past, she would end up in this body of water and be devoured by the alligators, should she ever reveal what Epstein had done to her,” the filing states.

She was raped repeatedly by Maxwell and Epstein in from of her son, the lawsuit claims.

She was trafficked to Epstein’s powerful friends including a local judge under dire threats, she has claimed.

She was also subjected to vaginal surgery so that they can present her as a virgin in front of a high-profile client. The procedure left her permanently damaged and mutilated.

She was filmed nude while performing sexual acts and Maxwell and Epstein accumulated material to blackmail her for six months.

By the time, she escaped the clutches of Maxwell and Epstein; she claimed to be so troubled by the threats. They said that she will not get any help from the authorities.

It’s not clear when she escaped, but Epstein pleaded guilty in 2008 getting hold of a child for prostitution and soliciting a prostitute.

He got 13-month jail sentence. He was also arrested in 2019 for sex trafficking. Epstein was apparently suicided in a Manhattan jail cell.

Maxwell is in jail in Brooklyn pending her trial which will start in July.

Last year, the Attorney General for the US Virgin Islands, where Israeli spy Jeffrey Epstein had a home, had demanded logs for his four helicopters and three planes, from 1998 until he was suicided.

Names of every passenger to have flown on Jeffrey Epstein’s Lolita Express are to be revealed sparking panic among his powerful friends.

Epstein was running a high-profile blackmail scheme under cover of a hedge fund. The seed-money for the hedge-fund came from Leslie Wexner, the founder of Victoria’s Secret which was used to recruit underage girls for Epstein’s operation.https://t.co/iCkkn5VVvi

The documents were unsealed as a result of the two-year-long case to unseal documents involving a sex trafficking lawsuit filed by Mike Cernovich.

Meanwhile, the husband and son of Judge Esther Salas who was assigned Jeffrey Epstein linked money-laundering case got shot just four days after she was assigned the case.

All of Jeffrey Epstein’s high-profile clients maintained by his partner Ghislaine Maxwell, now arrested by the FBI are contained in a Little Black Book which includes Mike Bloomberg, Richard Branson, top US politicians, British Royals like Prince Charles, the Rothschilds, George Soros, and the Queen of England herself.

Epstein was an Israeli spy who ran a pedophile sex-trafficking blackmail network for high-level individuals in positions of power.

With the dramatic arrest of his partner Ghislaine Maxwell, who possesses the blackmail sex tapes, a lot of prominent individuals are at risk of being exposed.

Interesting, it’s the Russians who hold the keys to the case here.

Since most of the British royalty and British-controlled Deep State assets are involved in the network, British Intelligence Chiefs are concerned about Russian intelligence obtaining compromising material of the case.

Interestingly, Kremlin has its hands on the controversial Jeffrey Epstein’s blackmail sex tapes. The details of which were revealed in the sensational book “EPSTEIN: DEAD MEN TELL NO TALES.”