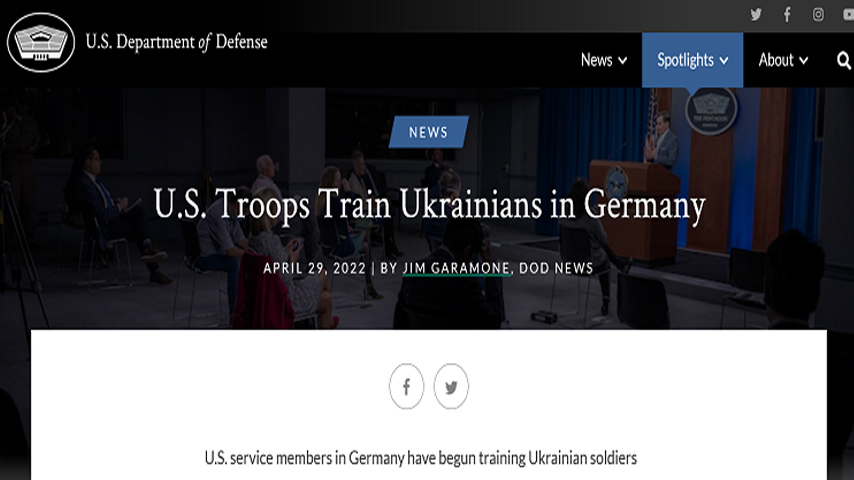 The U.S. Department of Defense now openly acknowledges that it is training Ukrainians in Germany to fight Russia. Nor did they start doing this when Russia first began its “special operation” in Ukraine in early 2022. The U.S. has in fact been training Ukrainian soldiers since 2015.

So this has been going on for the past seven years. Ever since Poroshenko became president following the ‘Maidan Uprising’ the U.S. has been working to establish a potential new military front on Russia’s western border. Indeed this has its roots even further back, nearly two decades before the Maidan Uprising in fact.

Shortly after the Berlin Wall fell in the early 1990s the Bush administration assured Russian President Gorbachev that NATO would expand “not an inch” eastwards. Of course, since then Albania, Bulgaria, Croatia, Latvia, Slovakia, Poland and Slovenia have all joined the NATO alliance. To compound matters, the US is now arming and training Ukrainians to fight Russia too. For many Russians, this must seem like a complete double-cross. As if to confirm that impression the U.S. has ramped up the training it is providing Ukraine’s military. It is now training more than 200 Ukrainians how to use and train others to use the M777 Howitzer, a 10,000-pound heavy hitter. The objective is that they will train others when they return to the front and the M777 Howitzers are delivered as part of a multi-billion dollar U.S. military aid package to Ukraine.

Meanwhile, hundreds of other Ukrainian military personnel are also being trained to use other heavy weapons systems in Germany. Among other systems, they are being trained on are advanced Western-made radars, heavy armor and the Gepard anti-aircraft armored vehicle.

If I were a Russian I would be looking at these developments with some concern. After all, the West had done something similar in Syria; where it covertly armed and trained various militant groups like ISIS and Islamic State in an effort to oust President Assad.

In essence, the West used the militants as proxies in Syria.

Now it appears to be doing the exactly same in Ukraine. Where it is arming and training local forces to act as its proxies. Only now this isn’t being done covertly but openly and the stakes are much higher because these proxies won’t be fighting the Syrian Army or Hezbollah but Russian forces using much heavier weapons.

Of course, at some point, the Russians may lose patience and decide to strike at those who are arming and supporting these Ukrainian proxies.

At which point the fighting in Ukraine could very easily and quickly spill over into Poland, Slovakia, Hungary or beyond.

Call me a paranoid “conspiracy theorist” but the fact the U.S. Dept. of Defense is being so open and generous in its military aid to Ukraine suggests to me that they are working with this aim in mind.

The elite are desperately working to reduce the global population. The supposed pandemic has failed; it wasn’t killing sufficient numbers fast enough and too many people were waking up to the pandemic’s real agenda.

The elite usually has several schemes, or fronts, working toward the same goal simultaneously. So now they’ve switched the emphasis of their efforts to Plan B: a war that could escalate into WWIII. The ultimate aim, of course, is massive global depopulation. Ed.

US Troops Train Ukrainians in Germany