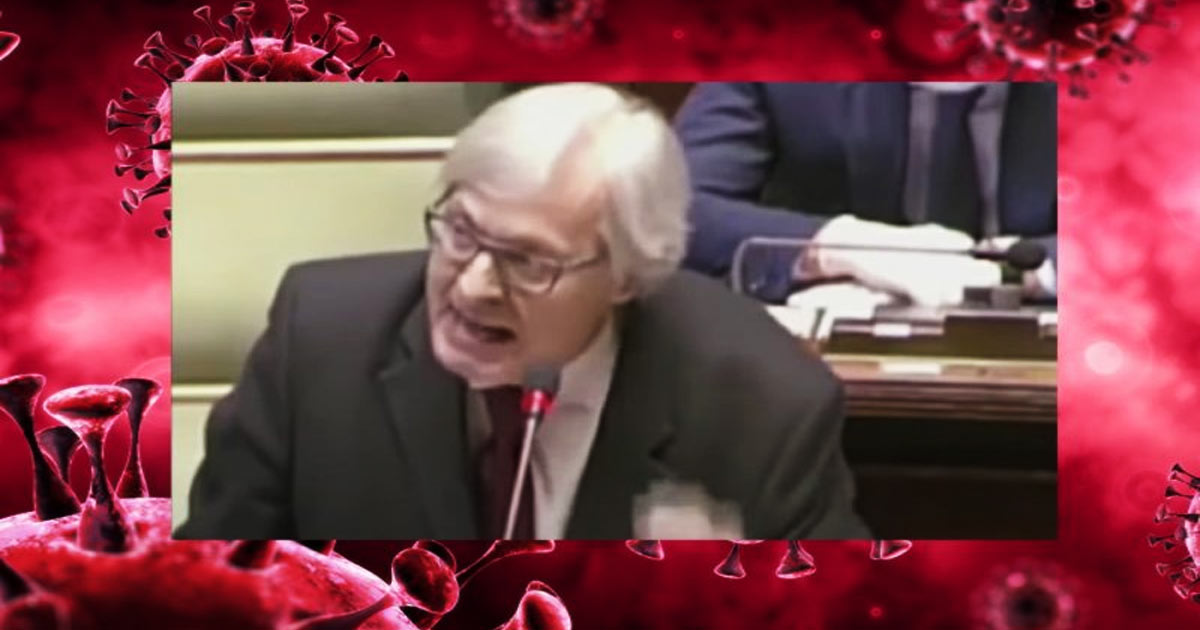 Mayor of Sutri, Vittorio Sgarbi, in an emotional speech at a hearing on the 24th of April, he stated the following:

“We are on the eve of April 25th and we must be united against the dictatorship and united in truth. In fact, we are not. Let us not make a parliament of lies… the science evoked here was saying that this virus is much more than the flu.

“That science is in fact the science that has been referred to and guided by this government. It was said and it was documented, don’t lie… don’t make this parliament a lie!

“At least here, let Gianbatist Vico’s principle, “Verum ipsum factum” apply! And then, you heard and gave the numbers, I want to give the numbers too… don’t talk about 25,000 dead here, not true!

“Don’t use the dead for rhetoric and terrorism! Data from the Italian Institute of Public Health say that 96.3 percent of people have died of other pathologies! Exact data. The numbers say it! It’s true, it’s true, go ahead and read them.

“Let us unite in the fight against hypocrisy, lies and the falsification of numbers, against false numbers given to terrorize Italians. The 25,000 dead… died of heart attack, cancer and other pathologies. We should not use this to humiliate and embarrass Italy. We do not use this to give citizens false news! Get the numbers, check them out.

“Here in Italy, were not 25,000 deaths caused by caused by the coronavirus! Not true! It’s just a way to terrorize the Italian people and impose a dictatorship without consent! That’s ridiculous!”

Dr. Dan Erickson and Dr. Artin Massihi of Accelerated Urgent Care raised multiple concerns they are seeing with COVID-19 and how we are handling it.

In one part of their interview, Dr. Erickson states the following,

“But ER doctors now, my friends that I talk to say, “you know it’s interesting, when I’m writing up my death report I’m being pressured to add COVID.”

“Why is that? Why are we being pressured to add COVID? To maybe increase the numbers and make it look a little bit worse than it is? I think so.” – Erickson

You can read more about that and access the full interview here.

An article recently published by the Financial Times points out,

“In the UK, about 150,000 people die every year between January and March. To date, the vast majority of those who have died from COVID-19 in Britain have been aged 70 or older or had serious pre-existing health conditions.

“What is not clear is how many of those deaths would have occurred anyway if the patients had not contracted COVID-19.

“Speaking at a parliamentary hearing last week, Professor Neil Ferguson, director of the MRC Centre for Global Infectious Disease Analysis at Imperial College London, said it was not yet clear how many “excess deaths” caused by coronavirus there would be in the UK.

“However, he said the proportion of COVID-19 victims who would have died anyway could be “as many as half or two-thirds”.

An article written by John Lee, a recently retired professor of pathology and a former NHS consultant pathologist raises some interesting questions. He published it in The Spectator, and in it he writes:

“If someone dies of a respiratory infection in the UK, the specific cause of the infection is not usually recorded, unless the illness is a rare ‘notifiable disease’.

“So the vast majority of respiratory deaths in the UK are recorded as bronchopneumonia, pneumonia, old age or a similar designation. We don’t really test for flu, or other seasonal infections.

“If the patient has, say, cancer, motor neurone disease or another serious disease, this will be recorded as the cause of death, even if the final illness was a respiratory infection. This means UK certifications normally under-record deaths due to respiratory infections.

Now look at what has happened since the emergence of Covid-19. The list of notifiable diseases has been updated.

This list — as well as containing smallpox (which has been extinct for many years) and conditions such as anthrax, brucellosis, plague and rabies (which most UK doctors will never see in their entire careers) — has now been amended to include Covid-19. But not flu.

That means every positive test for Covid-19 must be notified, in a way that it just would not be for flu or most other infections.

In the current climate, anyone with a positive test for Covid-19 will certainly be known to clinical staff looking after them: if any of these patients dies, staff will have to record the Covid-19 designation on the death certificate — contrary to usual practice for most infections of this kind.

There is a big difference between Covid-19 causing death, and Covid-19 being found in someone who died of other causes.

Making Covid-19 notifiable might give the appearance of it causing increasing numbers of deaths, whether this is true or not. It might appear far more of a killer than flu, simply because of the way deaths are recorded.”

Dr. Sucharit Bhakdi, a specialist in microbiology and one of the most cited research scientists in German history who refers to the measures being taken governments around the world as “Draconian.”