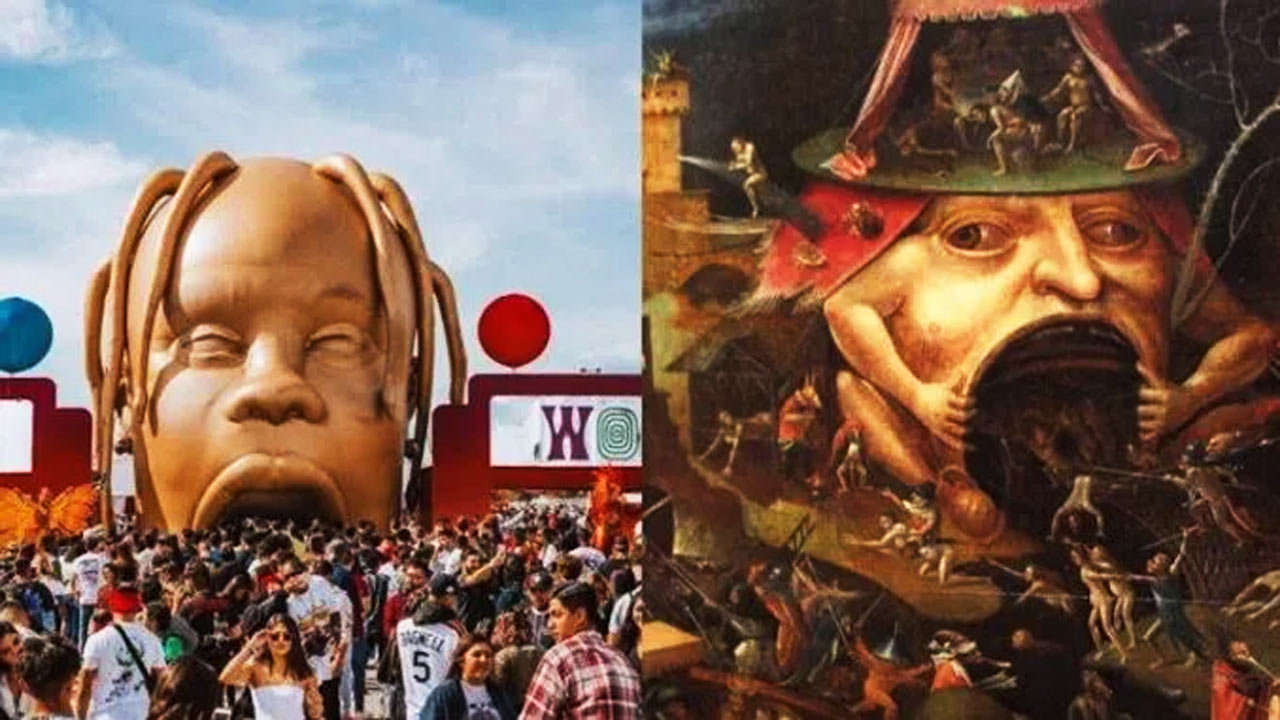 The Astroworld concert, where 8 kids were killed during rapper Travis Scott’s performance, was a demonic soul-harvesting Satanic ritual, witnesses at the concert claim.

Travis Scott enjoyed watching his fans get crushed to death as audience members pleaded with him to stop the show, according to disturbing videos posted to social media. He refused to stop the show.

Oh my god what is wrong with him fr pic.twitter.com/RlPLRs75P8

As the deaths piled up and the crowd became hysterical, Travis displayed Illuminati images on the stage as he continued to play for another 30 minutes.

“It was demonic,” an Astroworld concert goer said in a video after leaving the concert.

“It just felt like we [were] like, literally, like in f***ing hell, bro. It felt like we [were] in a concert in hell. You couldn’t breathe. You couldn’t see. Just imagine all the people they are going to find tonight who [were] in that crowd who nobody could see, who nobody could hear who passed out. And everybody was just trampling on top of them in the whole f***ing concert,” he said.

“It was so many bodies who [were] laid out. People were getting pulled out who was fainted. The managers were trying to give them CPR and they were flipping them over and they were literally turning black and blue. [I’ve never seen death] in my f***ing life bro,” he continued. “That was demonic shit. What was so crazy – people were screaming, ‘Help!’ trying to tell Travis Scott. The whole crowd was going, ‘Help! Help!’ and he just kept going, bro. It was scary – it was so demonic.”

Texas
Eight people died and scores were injured, INCLUDING A 10-YEAR-OLD CHILD, at an outdoor concert at rapper Travis Scott's Astroworld Festival in Houston after the crowd reportedly rushed the stage, authorities said Saturday.

Thegatewaypundit.com reports: Scott is seen in video watching paramedics carry out a member who died in his audience as he continued to sing, but he claimed on Sunday that he would have stopped the show if was aware people were in danger.

“My fans really mean the world to me and I always just really want to leave them with a positive experience,” Scott said in a statement on Twitter, as he shuts his eyes and profusely rubs his forehead. “Anytime I can make out anything that’s going on, I would stop the show and you know, help them get the help they need. I could just never just imagine the severity of the situation.”

Travis Scott speaks on last night’s tragedy at Astroworld; and what MANY are now calling a SATANIC RITUAL!! pic.twitter.com/r9d55VRZEd

The rapper, whose real name is Jacques Bermon Webster, is now facing lawsuits filed by concertgoers who were injured in the crowd.

Scott kicked off the show standing in front of a fiery, hellish mountain and a giant eyeball that gazed at the public.

Some in the crowd began climbing to the stage pleading for the performance to stop as they watched those around them faint, but it never did.

Scott’s performance concluded with giant hands wrapping around the portal.

Attendees of the concert, including a security guard, were injected with an unknown substance, according to Houston’s Police Department Chief Troy Finner.

“Chief Finner said a security guard working the event felt a prick in his neck by an unknown assailant while he was trying to restrain a citizen — and he quickly fell unconscious. Finner says the guard was revived by the use of NARCAN … and that medical personnel did, indeed, see something on his neck that indicated he’d been stabbed with a syringe,” TMZ reports.

Bodies of the eight people who were killed are undergoing autopsies to determine the causes of death.

Imagery promoting Astroworld shows people being sucked into “another universe” and displays of symbolism associated with the “Illuminati,” a satanic occult that is branded by mainstream media as “conspiracy theory.”