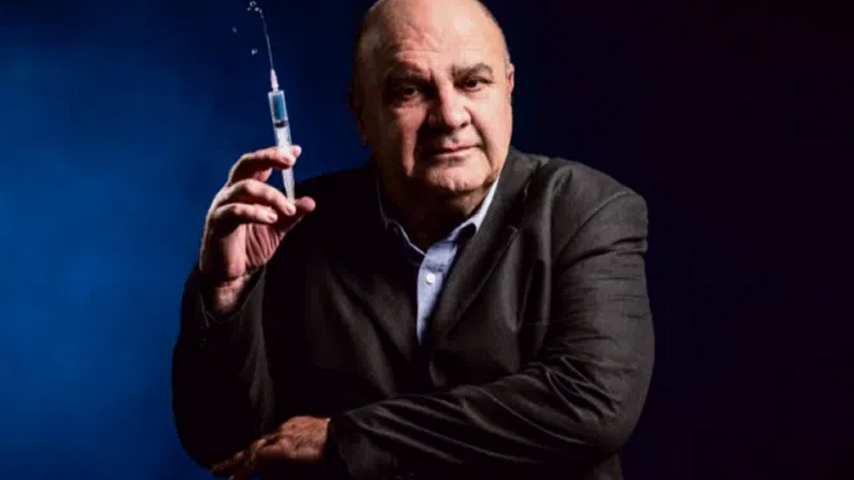 Big Tech censorship, in collusion with Big Pharma, has reached absurd new heights. The man who led Israel’s efforts to develop a Covid-19 vaccine has been banned by Twitter for speaking out about his concerns with Covid-19 vaccines after he suffered a vaccine injury.

Professor Shmuel Shapira, M.D., MPH, served as the Director General of the Israel Institute for Biological Research (IIBR) between 2013 and 2021, where he led Israel’s effort to develop a coronavirus vaccine.

Prof. Shapira is also the founder and head of the Department of Military Medicine of the Hebrew University Faculty of Medicine and IDF Medical Corps. He is a Senior Research Fellow at the International Institute for Counter-Terrorism (ICT) at Reichman University in Israel.

Shapira previously served as Deputy Director General of the Hadassah Medical Organization and as the Director of the Hebrew University Hadassah School of Public Health. He is a Full Colonel (Res.) in the Israel Defense Forces (IDF) and served as the IDF Head of Trauma Branch.

He has published more than 110 peer-reviewed scientific articles and is the editor of Essentials of Terror Medicine, Best Practice for Medical Management of Terror Incidents, and Medical Response to Terror Threats.

Kanekoa reports: Last week, Twitter censored Prof. Shapira—who was “physically injured” after his third Pfizer vaccine—and forced him to remove a post that said: “Monkeypox cases were rare for years. During the last years, a single case was documented in Israel. It is well established that mRNA vaccines affect the natural immune system. A monkeypox outbreak following massive covid vaccination: *Is not a coincidence.”

Prof. @shmuelcshapira, head of Israel Biological Institute (the most senior medical-scientific position in Israel) posted on the connection between monkeypox and you-know-what.

Twitter locked his account and forced him to delete it. They know more about biology than him 🤡 pic.twitter.com/QeIsWjSktt

Prof. Shapira, who started his Twitter account in January 2022, has grown increasingly critical of the mRNA vaccines since he first denounced the Israeli Genesis Award for being delivered to Pfizer CEO Albert Bourla.

On January 18, 2022, Shapira said (translated from Hebrew by Google): “The Israeli Genesis Award was given to the CEO of Pfizer, so wretched. Instead of giving it to an Israeli scientist, and all this for a mediocre, short-acting vaccine that yielded Pfizer a profit of billions, a wretched and exiled one. Bourla will be appointed the King of Israel now. Let me remind you that vaccinated Israel is the fourth-leading in the number of corona patients in the world. There is a championship!”

On February 6, 2022, Shapira asked: “What grade would you give to a vaccine that people are vaccinated with three times and get sick twice (as of today)? Not to mention significant side effects[.]”

On April 9, 2022, Shapira said: “The CEO of the company, millions of whose vaccines were used in Israel for vaccination, stated in an interview with NBC that Israel serves as the world’s laboratory. To the best of my knowledge, this is the first case in history where experimental guinea pigs paid an exorbitant rate for their participation.”

On May 13, 2022, Shapira said: “I received 3 vaccinations, I was physically injured in a very significant way as many others were injured[.] And in addition, my trust in the nature of the decisions and in the processes of making them has been severely eroded. No one asked and checked. I will fight with all my might so that truthful answers regarding all decisions and not just regarding the vaccine are given[.]”

On June 7, 2022, Shapira said:  “We are talking about vaccine five in two and a half years. When the vaccine is planned for the sequence from January 2020 (the great-grandfather of the great-grandfather of current variants). A vaccine that does not prevent infection does not prevent morbidity. And it is allegedly attributed to significant side effects, to say the least. Why? What is the logic? Which authority approved it? And don’t say that it prevents a serious illness, no one has proven it.”

On June 8, 2022, Shapira said: “I will continue and ask why give an outdated fifth vaccine that does not prevent disease and apparently causes many significant common side effects.”

On July 5, 2022, Shapira discussed the “son of a 36-year-old Australian friend” who developed “severe ventricular arrhythmias and went into heart failure” only “days after the second Pfizer vaccine”.

“The compensation is automatic by the Australian government,” he said. “Despite the behavior of their government, they admit to the connection and the phrase ‘no connection’ does not appear in the lexicon.”

On July 15, 2022, Shapira shared a chart of New South Wales COVID rates showing an increased risk of COVID infection with every new dose of the mRNA vaccine on which he commented: “According to official data from Australia the more you are injected the more likely you are to get sick as the fourth injection jumps the chance dramatically. According to this study, it is supposedly an anti-vaccine at least according to what I have been taught.”

On July 18, 2022, Shapira said: “I am not anti-vaccine, I am anti-stupidity, anti-fake science, and anti-incompetent management.”

On July 28, 2022, Shapira said: “T warned me to remove the T connecting MP to C. Each day I understand better where we live and in which year.”

On July 31, 2022, Shapira shared a link to the OpenVaers COVID Vaccine Adverse Event Reports which showed a total of 1,357,937 reports including 170,151 hospitalizations and 29,790 deaths, above which he simply commented: “Safe & Efficient”

In summary, as the Director General of the Israel Institute for Biological Research, Professor Shmuel Shapira might be the most senior ranking medical scientist in the world to openly criticize the COVID vaccines.

The Israel Institute for Biological Research was established in 1952 as a governmental research institute, founded by a group of scientists from the Israel Defense Forces.

Since then, the IIBR has been engaged in R&D in the fields of biology, chemistry, and environmental sciences in order to provide the State of Israel with defense capabilities against chemical and biological weapons.

In a post-lockdown world, where governments increasingly coordinate with Twitter, Facebook, and YouTube to censor criticism of COVID vaccines, even senior ranking medical-scientist are being silenced for speaking about the science that counters the pharmaceutical industry’s narrative.

Hopefully, Professor Shmuel Shapira—who was previously the top Israeli military scientist researching chemical and biological weapons—can now set his sights on the COVID mRNA vaccines and bring more attention to the death and destruction they are causing too many around the world.