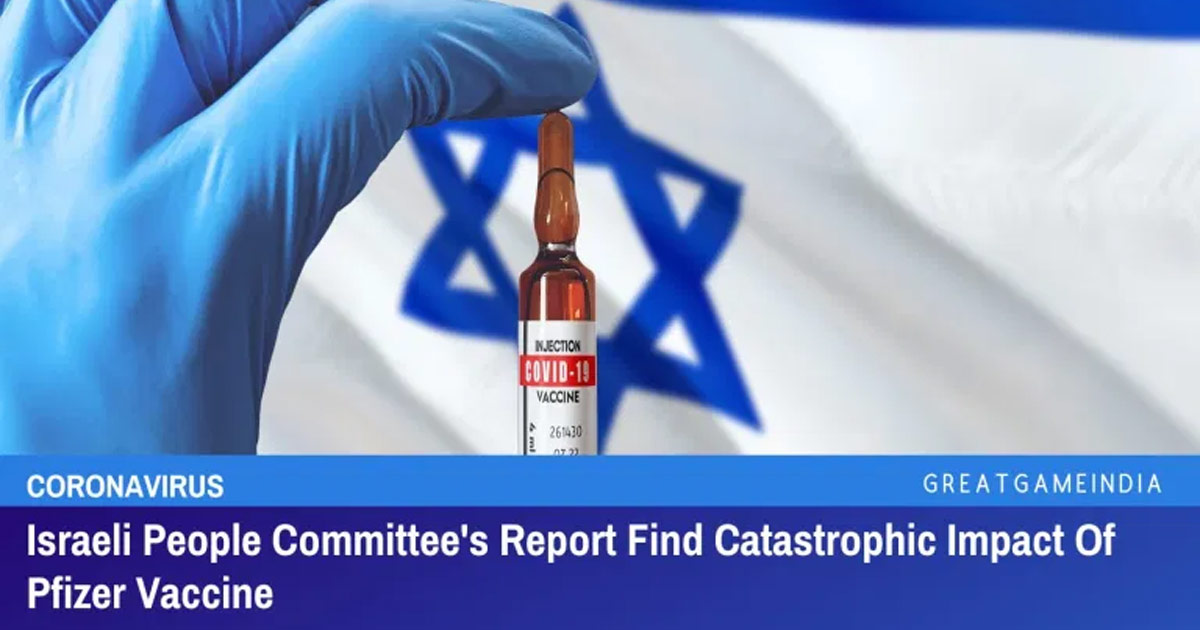 The Israeli People Committee (IPC), a civilian body made of leading Israeli health experts, has published its April report into the Pfizer vaccine’s side effects indicating damage to almost every system in the human body. If the findings by IPC are genuine, then the Pfizer vaccine is linked to more deaths in Israel than AstraZeneca’s in the whole of Europe. The findings are catastrophic on every possible level. This is a detailed report that highlights the most devastating findings.

Their verdict is that “there has never been a vaccine that has harmed as many people.” The report is long and detailed (read the full report below).

Yet the report states, “according to data provided by the Ministry of Health, only 45 deaths in Israel were vaccine-related.”

If these are genuine numbers, then Israel has failed to report on its experimental results genuinely.

We have been hearing a lot about the rare side effects of the AstraZeneca vaccine and more than 300 cases of blood clots found in Europe.

German scientists have found the exact 2 step process of how the AstraZeneca COVID-19 vaccine causes blood clots in recipients. They describe a series of events that has to happen in the body before the vaccines create these large clots.

If the findings by IPC are genuine, then the Pfizer vaccine is linked to more deaths in Israel than AstraZeneca’s in the whole of Europe.

Meanwhile, the US CDC and FDA have lifted their recommended pause on the use of Johnson & Johnson’s coronavirus vaccine with a condition that it will now include a safety label warning that its vaccine comes with blood clot risks.

“According to Central Bureau of Statistics data during January-February 2021, at the peak of the Israeli mass vaccination campaign, there was a 22% increase in overall mortality in Israel compared with the previous year.”

“According to this estimate, it is possible to estimate the number of deaths in Israel in the proximity of the vaccine, as of today, at about 1000-1100 people.”

If this is a genuine statistical analysis, then numbers reported by health authorities of Israel are misleading to a very great extent.

“There is a high correlation between the number of people vaccinated per day and the number of deaths per day, in the range of up to 10 days, in all age groups.”

This is not only about the death risk, as per the reports of IPC, “as of the date of publication of the report, but 2066 reports of side effects have also accumulated in the Civil Investigation Committee and the data continue to come in.

These reports indicate damage to almost every system in the human body. Our analysis found a relatively high rate of heat-related injuries.

26% of all cardiac events occurred in young people up to the age of 40, with the most common diagnosis in these cases being Myositis or Pericarditis.

Also, a high rate of massive vaginal bleeding, neurological damage, and damage to the skeletal and skin systems has been observed.

It should be noted that a significant number of reports of side effects are related, directly or indirectly, to Hypercoagulability (infarction), Myocardial infarction, stroke, miscarriages, impaired blood flow to the limbs, pulmonary embolism.”

Who is Tedros Adhanom? World Health Organization’s Gay Terrorist who wants to Lock you down

Without VACCINES We Would All Be…Healthier