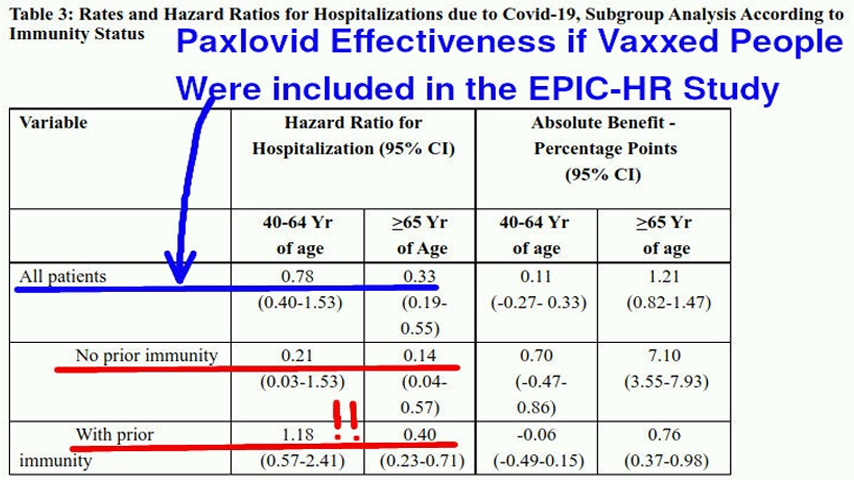 Paxlovid Works much WORSE in the Vaccinated and NOT AT ALL in the younger ones!

A new study from Israel tried to assess the real-world benefits of Paxlovid and tried (clumsily) to separate patients by “vaccination status”.

You can see why I think that this is a clumsy way to stratify patients: in my own mind, there is a huge difference between a no-dose patient who never received any Pfizer vaccine, and a one-dose patient who received one dose, and possibly was injured by it and declined subsequent doses. Unfortunately, we are stuck with the way this study stratifies the patients into immunity-free and immune subgroups.

For simplicity, I will still refer to them as vaccinated vs unvaccinated, but be mindful of the above caveat regarding the study’s stratification So, without further complaining, let’s go on to the results.

For example, for younger 40-64yo “no prior immunity” patients, Paxlovid-treated persons have only 0.21 times the risk of untreated patients. For the older over-65 years old group, the risk for Paxlovid-treated patients is only 14% of the no-Paxlovid group. For the unvaccinated (no-immunity, see discussion above) Paxlovid works a little worse than in the Pfizer-sponsored EPIC-HR trial, but still decently.

The shocker lies in the vaccinated group! Paxlovid does NOT work at all — and shows INFERIOR RESULTS — in the younger 40-64 unvaccinated subgroup. In fact, the small statistical sample shows that the risk of severe outcomes in the Paxlovid group is HIGHER than in the no-Paxlovid group (1.18). The sample is relatively small, but you can see that for younger vaccinated persons, Paxlovid is at best useless, and at worst, harmful.

The picture is telling:

In fact, the late rise in the 40-64 treatment group hints at the “Paxlovid Rebound”, which I brought up early on April 13, before any data was available, based just on a bunch of Reddit posts.

This is Why Pfizer did not Want to Include the Vaccinated

Had Pfizer included vaccinated people, the results would look something like what is underlined with the BLUE line:

The results with vaccinated people included would show an utter lack of effectiveness in the younger group, statistically indistinguishable from a placebo. It would show very modest effectiveness (67%, equivalent to HR of 0.33) in the older group.

Such a joke medication would probably be still approved by the FDA — they approve everything that Pfizer asks for — but the outcry from the public would probably embarrass everyone.

So, what did Pfizer do? They wisely kicked vaccinated people out of the EPIC-SR trial so that their medication would artificially look good.

Did Pfizer Know that Paxlovid will NOT Work in the Vaccinated?

This section of my article is by necessity more speculative. What Israeli data shows is that the younger the patients get, the more useless — if not outright harmful — Paxlovid gets for them.

What if this gets even worse for even younger patients? What if Paxlovid is actually harmful to children or young adults? It was never tested on children at all! Despite an absolute lack of clinical trial data on Paxlovid in children, the FDA recklessly approved it anyway for 12-18-year-old kids.

I am praying that no children will be harmed by Paxlovid — and if they get harmed, EUA prevents any legal liability.

Would you give Paxlovid to your children?