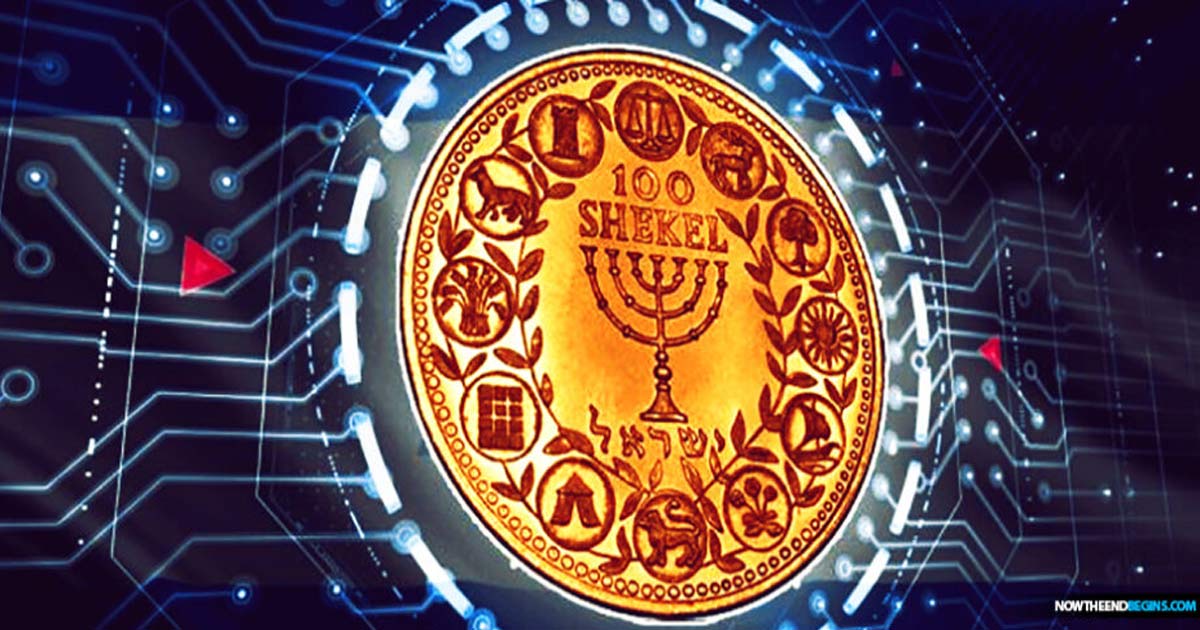 All over the world, we are seeing cryptocurrency coming online in fits and starts, stunning losses followed by even more stunning gains, and in Israel work is right now being done to see about the feasibility of a digital shekel. When you remember that the Mark of the Beast is an implantable device to control buying and selling, then you understand that the Mark is cryptocurrency.

In fact, everywhere you look right now, the whole world is going digital on every level, and currency is no exception. Ever think about the word ‘crypto’? It’s chock full of meaning to the student of bible prophecy. A ‘crypt’ is where dead bodies are kept, and a ‘cryptographer’ is someone who deals with things that are ‘hidden’ and ‘secret’. No matter how you slice it, ‘crypto’ currency is the preferred means of transaction for the end times generation, that’s how close we are.

FROM THE JERUSALEM POST: Toward the end of a panel discussion, Abir said the Bank of Israel had already run a digital currency pilot. Another member of the panel seemed surprised and asked: “You have already issued a coin?” Abir responded in the affirmative. However, Abir said he was not optimistic that such a central-bank digital currency (CBDC) would ever be launched.

“I HAD PREVIOUSLY ESTIMATED THAT THE CHANCE OF HAVING A CBDC WITHIN FIVE YEARS IS 20%,” ABIR SAID. “MY ESTIMATE HAS INCREASED A BIT IN THE LAST YEAR, MAINLY BECAUSE OTHER COUNTRIES ARE ADVANCING WITH IT TOO. BUT STILL THERE IS LESS THAN A 50% CHANCE.”

In May, the Bank of Israel said it was preparing an action plan for how it could offer a digital currency. The concept of issuing such a currency has been in discussion since 2017, but it decided to accelerate its research and preparation for the potential issuance “in view of the rapid developments in the digital economy and in payments, and in view of the major central banks’ work on the issue.”

A CBDC would rely on distributed ledger technologies such as blockchain, but it would be different from the cryptocurrencies that are popular today, including bitcoin. The most important difference is that while cryptocurrencies do not belong to any specific country, and some are characterized by having no central authority to manage them, a CBDC issued by a country’s central bank would be regulated by the relevant state authorities.

“THE OPTION FOR A CBDC IS STILL BEING EXAMINED, AND WHEN WE MADE OUR STATEMENT LAST MONTH, IT WAS NOT TO SAY WHAT WE ARE DOING, BUT RATHER TO SHARE WHAT WE DO NOT KNOW AND RECEIVE FEEDBACK FROM THE PUBLIC,” ABIR SAID.

In recent years, there have been significant and very rapid changes in the payments market in Israel and abroad. While no central bank in an advanced economy has yet announced a decision to initiate a project that would lead to its issuing a digital currency, there has recently been an apparent change in global sentiment on the matter, and the central banks in a number of major world economies have begun exploring the possibility of issuing a CBDC alongside existing means of payment.

The Bank of Israel is most concerned about staying on top of emerging global trends, Abir said.

“The payment system in Israel is at least a decade behind other countries,” he said. “But in the last year, we have started to close the gap with the distribution of the infrastructure that allows contactless payments and the entry of digital wallets. We are in the middle of a process of disruptive technology, and we do not know who are going to be the winners. Will it be the banks, credit-card companies, fintech, or big technology companies? There will be changes in the next few years that we do not yet know about. But it is clear that the environment in five years’ time will not be the same as the environment today.”

Abir played down common expectations for a digital currency.

“I’m sorry to tell you, but it’s not going to eliminate the banks,” he said. “No central bank will introduce a digital currency for this purpose. The banks will still have an important part in the entire payment system. Another thing that might disappoint you is that any digital currency of a central bank would not be designed as a kind of protection against bitcoin. What we are talking about is a payment system. Bitcoin is not a payment system, and it is not a currency. In the best situation, it is a financial asset, and in the worst case, it is a pyramid scam,” Abir said. READ MORE