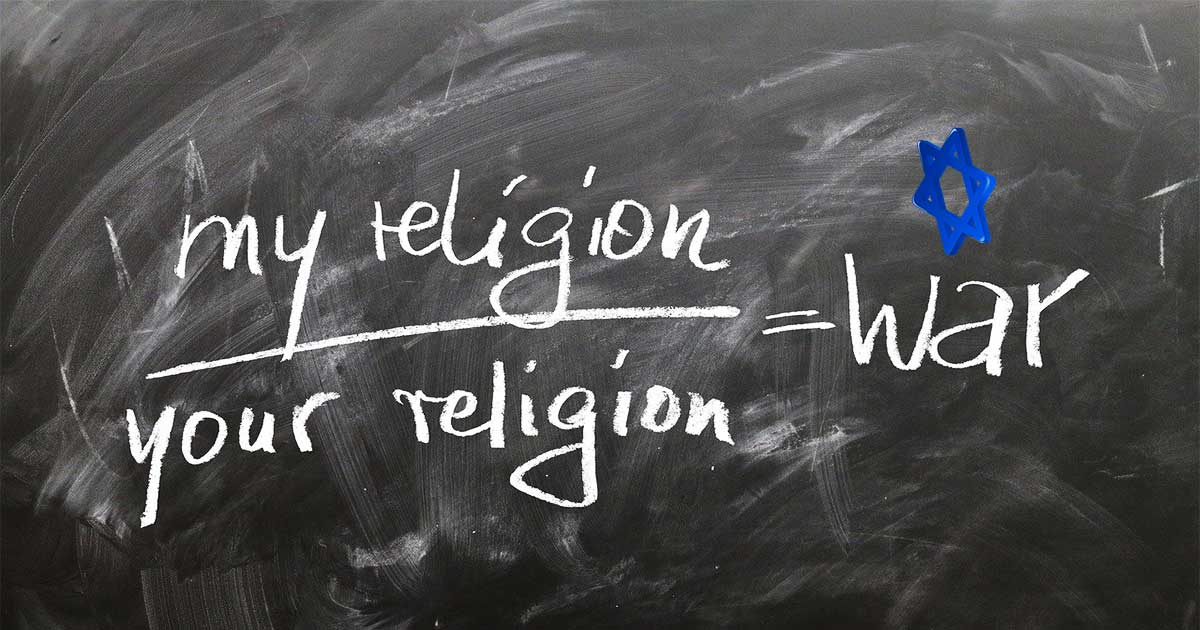 In this interview entitled “When Israel is Mighty,” Yossie Gurwitz, who was trained in a Yeshiva, says that now that Israel is mighty, Jewish supremacists can execute pathological Jewish teachings and prophecies.

Judaism, as a religion, has been frozen in time for the last 1800 years.

One thing we do know is this, and we know it for certain: from the very earliest times, rabbinical Judaism–the religion of the Pharisees–was a religion that hated the rest of mankind. It defines only Jews as human beings. Only Jews who believed in rabbinical Judaism, as enshrined in the Talmud, were regarded as human and everyone else was excluded.

Let’s get this right: it defines only Jews who believe in Talmudic Judaism as full human beings. Everyone else is on a lower level. These inferior beings are seen as the ‘Other’.  They must be rejected, pushed aside, and, in extreme cases, destroyed.

Rabbinical Jewish law does not prohibit the killing of a non-Jew? This is what you sometimes hear. But no, that is not strictly true. The rabbis do prohibit the killing of a non-Jew, but they do so in a very strange way: they refuse to punish a Jew who kills a non-Jew. If you kill a Jew, you get punished. If you kill even the slave of a Jew–and here it’s important to note that Orthodox Judaism has never abolished slavery–then there’s a stiff penalty you have to pay. It could come to execution. Or it could be fine. You see, they didn’t have jails in those days. But if you kill a non-Jew, what then? No legal punishment!  Yes, you’re guilty, but there is no penalty in law. God will punish you!

And that is–how shall I put it?–a bit problematic. When you say something is a crime, but there’s no punishment for committing the crime, then it’s not really a crime.

That’s the Talmud for you.

When you come to the writers of later exegesis, especially the Shulhan Aruch, by that point the writer is already saying that there are situations where you can kill a non-Jew with impunity. Of course, this is written in the 16th century, after the expulsion of the Jews from Spain [1492 C.E.], so the writer has to be careful how he expresses himself and must make use of coded language. He, therefore, refers to the goyim–the gentile Christians–as “idolaters”. 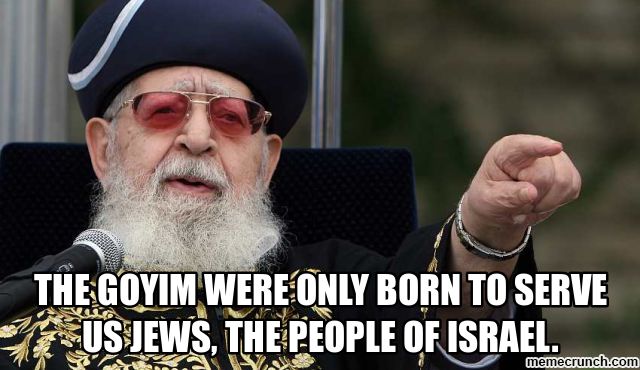 Note that there weren’t any “pagans” left in that part of the world at this point in time. Not in Europe. Not in the Muslim world either. So who on earth could he be calling “idolaters”? Everyone knows who he is talking about. He is talking about non-Jews. The goyim.

The worst case, in my opinion, is the case of Maimonides, one of Judaism’s greatest and most respected philosophers. He decrees that it is permissible to have sexual intercourse with a 3-year-old girl. That is the age of “consent”. Problematic, no?

Secondly, and even more alarmingly, Maimonides decrees that if a Jew rapes a three-year-old non-Jewish girl, then the little girl must be executed.  Yes, the gentile child must be executed for tempting the Jew to sin! The Jewish rapist himself is not executed. His life is spared.

For some reason, you have to treat the 3-year-old gentile girl like an animal. She is guilty of putting obstacles in a Jew’s spiritual path, and Maimonides quotes some verse or other about a bull…

The Rabbis know that the parts of Judaism that are misanthropic–that are deeply discriminatory to non-Jews–pose a problem for them. Because if they try to implement these rules of religion, things could turn out rather badly for them. There could be extremely unpleasant consequences. If they tried to implement the rule that a 3-year-old gentile girl should be executed, for example, for tempting a Jew to commit rape, the result would be a pogrom.

So to avoid that situation of a pogrom, the Talmud defines two different states of reality. There is one called “Darkei Shalom”, meaning Peaceful Ways. In other words, the reasoning goes like this: “This is the actual religious law, this is how we are supposed to act. But we cannot act like this right now, because it would cause a huge mess and Jews would be killed. So we must behave discreetly and not take any punitive action.”

This is the meaning of “Darkei Shalom” or Peaceful Ways.

Now, for how long will this rule of discreet behavior–of “Peaceful Ways”–still apply? It applies only as long as Israel is relatively weak. As long as Israel has not acquired sufficient strength to do as it pleases.

When Israel is independent, when Israel is mighty, the whole ball game changes. Israel can then afford to be merciless–to do exactly what it likes.

Under those circumstances, it’s all over. You can go back to enforcing the letter of the law according to the Talmud. No more “Peaceful Ways” then! No more need for peaceful ways!

Nowadays, when religious Zionists look at the world around them, they say: “We’ve got a state. We’ve got weapons. We’ve got a Jewish army. This hasn’t happened for 2000 years! What can this mean?  It obviously means that God has brought about this situation to enable us to take steps to bring about the Messiah. God wants us to build the temple.”

In other words, religious Jews believe they are under obligation to bring about Armageddon and the Last Days as soon as possible: in short, to precipitate an apocalyptic war to end all wars. This is seen as God’s will…

There are all kinds of prohibitions that are entirely psychotic. Rules and regulations based on a religion of vengeance. Religious Zionists have a serious problem with the mere existence of non-Jews. The Land of Israel is supposed to be only for Jews.

But what can we do? We happened to conquer a territory populated mainly by Muslims, and so the Muslims are now fighting us. That’s too bad.  And look, there is now even talk about genocide.

We have a holy book, the Torat Hamelech or King’s Torah,  which tells us that we are free to kill children if there is a reason to believe that one day these children could grow up to harm us. If you killed a Palestinian’s entire family and left only him alive, he will indeed have good reason to cause you harm one day. If you stole his lands and turned him into a refugee, driving him into Jordan or Lebanon, don’t you think he will have good reason to hate you and cause you harm?

Many people have said that this book’s arguments are not sound according to religious law, and so on and so forth. But no one has really tackled this problem head-on. It’s no wonder the book has become a bestseller!

In general, what religious Zionists want is for the Land of Israel to be for Jews only. 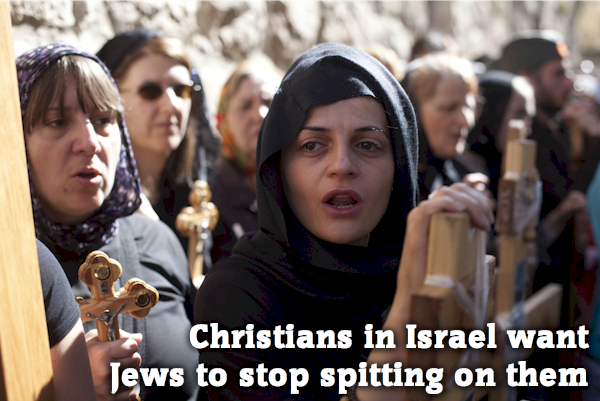 The situation for Christians, “when Israel is mighty”, will be really bad. This is because, according to Judaism, Christians are idolaters. So they will have to be killed, even if they do not resist Jewish rule.

In Jerusalem, Jewish religious students in the seminaries have a despicable habit: they urinate and defecate all over Christian churches. Go and talk to the church staff. You will hear it from every church, that this is going on. Spitting on clergymen in the street is something that happens every single day.

If the priest has the courage to hit the Jewish troublemaker back, to slap him or something similar, he is deported. Quietly. They cancel his residence permit in the country.

If you want to justify a pogrom, all you have to do is say the words “Missionary Threat”.

From that perspective, Christianity, which is the historical arch-enemy of Judaism, is going to get a serious beating once the religious Zionists are in power.

The CIA’s Secret Quest For Mind Control: Torture, LSD And A ‘Poisoner In Chief’