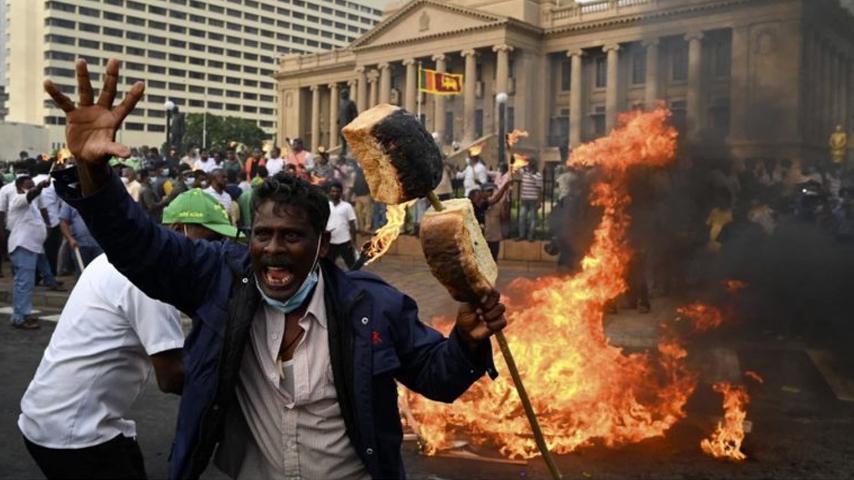 After France, Spain and Albania, Russia’s invasion of Ukraine increases brutal protests in Sri Lanka, amid the country’s worst economic crisis since independence in 1948.

In the last 48 hours, three men died in different parts of Sri Lanka while waiting in line for fuel. Two were in their seventies, and one had long-standing health problems. The third man reached the end of the line and managed to fill three cans, only to collapse as he was carrying the third can to his vehicle. The men died before they could be taken to hospitals. The long hours of waiting proved too much for their frail bodies. Many others like them have fainted in queues for fuel and food across the island nation.

The desperate lines and tragic deaths show the long-reaching impact of Russia’s invasion of Ukraine. Sri Lanka’s precarious developing economy has trade and tourism ties with both warring countries, which is now proving vital to the cash-strapped country. The island’s 22 million people seem to be caught in the war’s global stranglehold.

Economically troubled even before the coronavirus pandemic, Sri Lanka has seen its foreign reserves plummet so direly that it can’t afford imports of essentials from other countries. The riptide from the Ukraine crisis only exacerbated the South Asian country existing gaping deficit.

There are power cuts for several hours a day, and most families now rely on fuel to power their homes. Basic necessities have become so scarce, people are lining up for rations of rice, lentils, milk powder and sugar. Amid what the government calls the country’s worst economic crisis since gaining independence in 1948, the island’s people have been facing acute shortages of basics such as food, oil and paper along with soaring inflation, which is at 17.5 percent – among the 11 worst in the world.

Tourism accounts for 10 percent of Sri Lanka’s GDP, and the industry tanked under the pandemic. Now, with Russians and Ukrainians have been among the country’s most frequent visitors, hopes of a post-pandemic resurgence have grown dim, too.

“The Russia-Ukraine crisis aggravated the situation for Sri Lanka, but it didn’t create any new problems,” Asanka Wijesinghe, a research fellow at the Institute of Policy Studies of Sri Lanka, told VICE World News. Russia and Ukraine together account for only 2 percent of Sri Lanka’s imports, and 2.2 percent of exports. However, 45 percent of the wheat Sri Lankans consume – a South Asian staple – comes from Russia and Ukraine. Both countries are also among Sri Lanka’s top buyers for products like black tea.

Wijesinghe said the invasion and the increasing sanctions against Russia can aggravate the situation. “Prices will be hiked to an unmanageable scale, and it is not clear how Russia can pay [for exports] with those sanctions in place,” he said.

The crisis has hit on multiple fronts, which, in turn, has crippled the country’s ability to pay off its massive debt to international creditors. Sri Lanka has a total debt of $7 billion, out of which it has to repay $4 billion this year.

Experts have also flagged Sri Lanka’s import restriction on 367 items, which include food items such as milk, lentils and eggs, now categorized as “non-essential” items and are now sourced only by valid license holders. So, on top of expensive gas cylinders, many Sri Lankans are struggling to afford meat and vegetables.

Sri Lankans living in food poverty depended on imported calories as they were relatively cheap, Wijesinghe said. “But if there is an import control, then these products and their substitutes are becoming expensive in the market.”

The import limit has been in force for two years, but experts say that instead of helping the economy, it only increased red tape, hampered trade, and reduced government revenue.

The country’s financial turmoil is especially palpable in fuel queues.

One news outlet reported the fourth death on Monday – a 29-year-old motorcyclist was killed in a fight at one of those queues. In one viral video, a large crowd of angry protesters are seen stopping a bus full of tourists to protest fuel shortages.

With tempers rising, defense officials confirmed to AFP that they had deployed troops to fuel stations amid reports of scuffles. Anti-government protesters have mounted rallies demanding President Gotabaya Rajapaksa to resign.

In 2020, the World Bank said that 11 percent of Sri Lanka’s population lived in poverty. That’s a 6 percent increase over the previous 4 years.

“Sri Lanka hasn’t faced this kind of situation before,” said Wijesinghe, referring to the current economic crunch. “The cost of the crisis will fall on Sri Lankans disproportionately.”

In an attempt to mitigate the situation, the Sri Lankan government secured a $1 billion loan from India and initiated talks with China – a key credit source of Sri Lanka’s big-ticket infrastructure projects – about plans to borrow another $2.5 billion from the regional power. [VICE]